The contested restoration of Notre Dame in kitsch-Disneyland style is affecting the electoral campaign. Zemmour and French intellectuals, including non-Catholics, see the protection of Notre Dame as an opportunity to defend Christianity and French identity. The dispute is no longer between secularists and Catholics, since the defenders of tradition also include secularists, agnostics, Protestants and Jews, while Macron and the progressive French clergy have sided with those who want to "deconstruct". But the project conceals the goal of deconstructing everything: nation, gender, and family. This is a risk that the entire West runs. 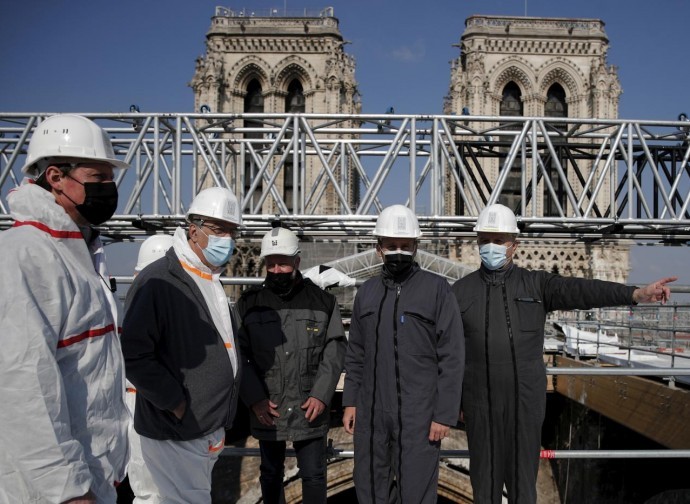 Now that the almost presidential candidate Eric Zemmour has also joined in, with an article in the weekly "Le Point" on 12 December, the restoration of Notre Dame has become a highly political issue. The project, managed by the curia, is to rebuild the interior according to "modern" criteria with mobile pews, lights that change with the seasons, and video projections. One hundred intellectuals, led by Stephane Berne, Pierre Nora, and Alain Finkielkraut, protested against the project in an appeal published in "Le Figaro" on 7 December, calling the renovation "idiotic" and "kitsch", while the same newspaper, in a commentary the following day, compared the remodelled Notre Dame to a "future Disneyland" – obviously not intended as a compliment.

The presentation of the project, albeit vague, unfortunately confirmed the rumeurs of the eve. So Zemmour took pen and paper and attacked Macron directly. According to the writer-candidate, it is Macron who is the true creator of a plan to "deconstruct" Notre Dame, the "centre of gravity of Christian France and symbol of our nation". Moreover, Zemmour recalls, the project's creator, a 'progressive priest', was received at the Elysée Palace. For the candidate, all this is just another example of how Macron "does not love France", of how his aim is to "deconstruct the heart of our civilisation".

That’s the story so far, which lends itself to a few considerations. The first is the timing.  Zemmour launched his appeal while on a mission to the Christians of the East, a cause that is always very much alive in France. He was accompanied by Philippe de Villiers, one of the fathers of sovereignty in the 1990s, who, having abandoned active politics, has for some time been the author of interesting essays and above all of a project for the historical protection of the memory and history of the Vendée: a large historical park, that of Puy du Fou, but very different from Disneyland. The message is clear: the defence of Christians outside the borders must be accompanied by the protection of religion and its churches, within the borders.

The second element to note is that De Villiers is a Catholic, descended from a noble family with long Vendean traditions, Zemmour is a Jew, as is Finkielkraut, promoter of the appeal, while Nora is one of the main French historians, secularist, and a republican. Apart from de Villers, none of them can be classified as part of the so-called Catholic culture. Yet all of them, from different angles, see the protection of Notre Dame as an opportunity to defend Christianity and, through it, French identity. If Finkielkraut and Zemmour as Jews, felt and still feel, first and foremost French, it is also thanks to Catholicism: even if they are not practising Catholics, and indeed are not Catholics at all.

All this while another great Catholic intellectual, perhaps the greatest living French political philosopher, Pierre Manent, author of fundamental works translated throughout the world, publishes a study, also sent to the Pope, which challenges the report of the Sauvé Commission on paedophilia in the Church. According to Manent, the Commission's conclusions are characterised by a "lack of scientific rigour", by "hostility towards the Church", by "ideological a priori", according to which the Church is "systematically" guilty of paedophilia. Hence the consequent risk of the “deconstruction of the Catholic priest”. With the added absurdity, Manent concludes, that it is a "Catholic" commission that is calling for "an integral reform of the Catholic Church" (Figaro, 10 December).

Curiously, Zemmour and Manent use the same word, "deconstruction", in this case of Catholicism, which leads, at least according to Zemmour, to the symbolic destruction of the nation. This is no coincidence: "deconstructionism", a philosophical current launched in the 1970s by Michel Foucault and Jacques Derrida, is the basis of today's ideology of inclusive differentialism, which intends to deconstruct everything: the nation, gender, the family, and so on.

The third interesting element to observe is that the dispute is no longer, as in the French tradition, between secularists and Catholics, or rather between "republicans" and "believers", given that, among the defenders of tradition there are secularists, agnostics, Protestants, Jews and, obviously, Catholics, while on the other side of those who want to "deconstruct" there are important parts of the French clergy: "progressives", as Zemmour defines them, but it is a question of understanding what he means by this term.

The fourth element to be noted is rather a confirmation: France is more than ever the last outpost of the Christian West. Italy is to some extent protected (but until when?) by the presence of the Vatican and also by the more widespread and ramified Catholic rooting. In France, on the other hand, the process of secularisation is more far-reaching and, historically, this is where it all started.  But it is also from there that, ever since the French Revolution, an attempt to "dechristianise" the world, the reaction has been stronger.

As a provisional conclusion, we are reminded of the famous passage by another great philosopher, also Jewish, but this time German, Walter Benjamin: "Not even the dead are safe from the enemy, if he wins. And this enemy has not stopped winning". Written in 1940, when Benjamin was on the run from the Nazis who had invaded France, where he had taken refuge years earlier, and shortly before he committed suicide to avoid falling into their hands. At that time this enemy was National Socialism. But today's progressivism does not seem to be animated by a different feeling that seeks the erasure of identity and tradition.