The Northern Ireland Assembly is up for renewal on May 5, but the two main nationalist parties, Sinn Féin and SDLP, have already turned their backs on Catholics: they not only support abortion and gay marriage, but are in favor of a law that promotes state schools  penalising Catholic schools. Yet, the number of those electing not to vote is on the  increase. 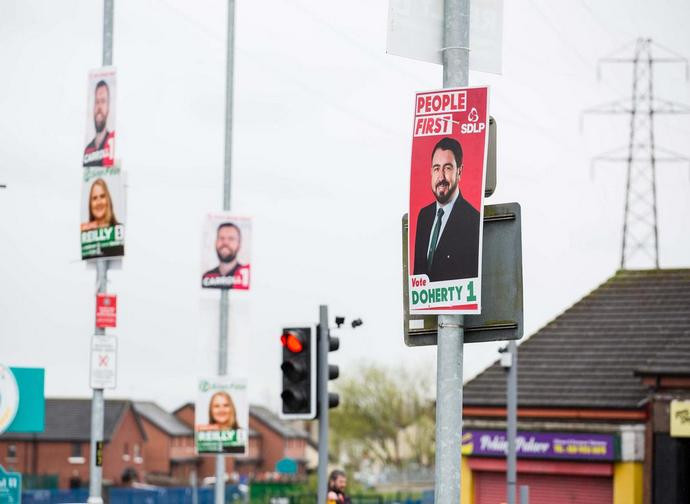 Northern Ireland – the micro-state created when Ireland freed itself from Britain 100 years ago – is facing a fraught election on May 5. According to recent polls, the North could have its first ever nationalist First Minister (their head of government). Given that nationalism – which favours uniting the North with the Republic of Ireland – has traditionally been the home of Catholic voters, you might think this bodes well for the long-oppressed Catholic faithful. However, due to the main nationalist parties’ often anti-Catholic bias, this is far from the case. On moral issues such as abortion and gay marriage, nationalist parties now openly oppose the teachings of the Church, with quite extreme views.

The main nationalist party since the signing of the Good Friday Agreement in 1998, which brought peace to Northern Ireland after decades of violence, is Sinn Féin. They are set to benefit from the increasingly hard-line and unpopular unionist – pro union with Britain – party, the Democratic Unionist Party (DUP). This is despite Sinn Féin themselves having dropped four points since the last election 2017. Meanwhile, the second most popular nationalist party the Social Democratic and Labour Party (SDLP), have slipped into fifth place, having previously been for decades the natural home for the Catholic vote. When considering what this might mean for the Catholic vote, two important facts emerge: firstly, the nationalist vote has decreased overall; secondly, the proportion of people suggesting they won’t vote at all has increased, while one in five are still undecided.

Due to the nature of the political conflict in the North, a person who was “nationalist” was often likely to be “Catholic” also. The primary vehicles for the nationalist/Catholic vote were the SDLP, founded by Nobel laureate and peacemaker John Hume, and then Sinn Féin. Ever since the Good Friday Agreement and their efforts to distance themselves from support of violent struggle, Sinn Féin have overtaken the SDLP quite significantly as the nationalist preference. However, at the same time, Sinn Féin’s social policies have shifted further and further from Catholic moral teaching. On issues like abortion and gay marriage, Sinn Féin have set themselves in opposition to the Church, while they have shown themselves hostile to Catholic schooling.

Meanwhile, the SDLP have offered less and less to the Catholic voter, basically abandoning them in favour of liberal stances on abortion and gay marriage. Despite being officially a pro-life party, the SDLP’s elected representatives have consistently voted for measures that seek to introduce a radical abortion law into the North, and it’s much the same on gay marriage.

Take another issue that has been cropping up recently, the question of school ethos. In the North, as in the south, the majority of schools are run with a Catholic or Protestant ethos (Protestant run schools are called controlled schools in the North). There are a small number of secular, state-run schools in the North, called integrated education, amounting to about 7%. There has been a concerted political push north of the border to prioritise integrated education, with Catholic schools being labelled “segregated”, “apartheid” and “parcels of hate”. Just last month, President of Ireland Michael D. Higgins’ inserted himself into the argument, while a private members bill that seeks to promote integrated education has been passed by the North’s assembly (effectively their parliament).

Catholic schools’ bodies expressed concerns about it. Letters sent to parents from Catholic and controlled schools by the schools themselves warned that, “concerningly, if this bill is passed in its current form, the legislation will potentially advantage the integrated (secular) sector over all other sectors on a range of educational issues. This bill ignores the diversity of Catholic schools and assumes diversity is only possible in an integrated school,” the letter read, according to the BBC. Bishop of Derry and member of the council for education Donal McKeown also expressed his “resentment” that the narrative is Catholic schools are bad, while secular schools are good.

Where do the main nationalist parties stand? Sinn Féin have nailed their colours firmly to the mast, as their spokesperson Pat Sheehan welcomed the bill’s progress, saying it will drive “positive change” for society. Meanwhile, the SDLP’s Education Spokesperson Daniel McCrossan indicated his party’s position, emphasising their long commitment to integrated education as “one key way in which we can help bring society together”. Only Aontú have spoken up on the matter so far, strongly defending Catholic education and calling for protection of plurality in the North’s schools.

Few Catholics in the North disagree with Mr McCrossan’s sentiment – it is one way. But the fact is it is effectively being promoted as the only way, while Catholic and Protestant schools are demeaned by politicians and the media. And yet the most popular nationalist parties actively promote this! It leaves Catholic voters who take the Church’s moral teachings to heart in a tricky decision at the polling booth. There has been some talk that socially conservative Catholics may be induced to vote for the DUP on the grounds that they are strongly pro-life. But delving further into the poll’s statistics, it becomes clear that this is highly unlikely. Just 2.1% of Catholics said they will vote unionist, although there is a slight increase in the number who say they will vote for the traditionally soft-unionist Alliance party (11%).

The majority of those who identify as Catholic say they will vote for a nationalist party (54%). Another 7% said they would vote “other”. That leaves a further 24% either undecided (14%) or not voting (10%). While this is less than Protestant voters (30%, made up of 23% undecided, 7% not voting), it still means a quarter of the Catholic vote doesn’t know what box they will be ticking come May. And who could blame them? As is increasingly the case south of the border, committed Catholics are being left politically homeless. With 10% already indicating they won’t be voting, and given that no major party seems particularly interested in wooing them, could more be heading that way? Whatever happens at the polling booths in May, it is likely to mean bad news for committed Catholics.