Nordstream 2 (and Ukraine) divide US and Russia

The direct confrontation between Biden and Putin failed to lower tensions on the Ukrainian "front": Russia wants to keep NATO at a distance; the US is trying to create a division between Russia and Europe, starting with the boycott of the Russian-German gas pipeline Nordstream 2. 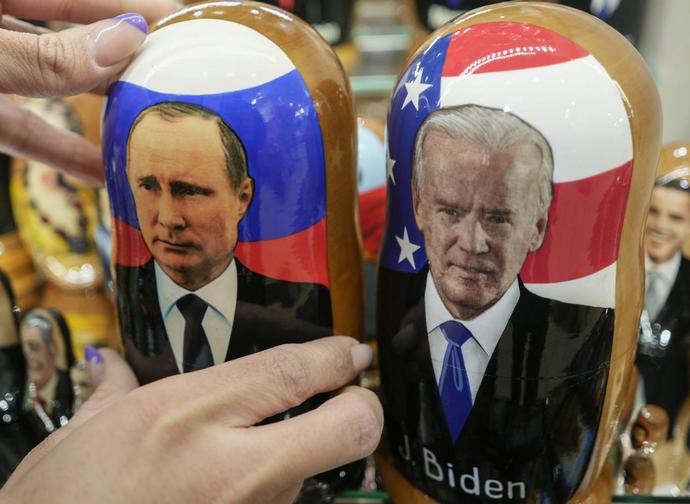 Not even the videoconference talks between Vladimir Putin and Joe Biden, on December 7, served to cool the tension over the Ukrainian "front", where Washington has long accused Moscow of concentrating troops and vehicles (up to 175,000 soldiers) for an imminent military offensive in Ukraine. On December 1, Putin called for negotiations to define "binding and concrete guarantees" to stop NATO expansion to the east and exclude the deployment of weapons that threaten Russia in the vicinity of its territory.
In fact, Russia is demanding assurances that Ukraine will not become part of NATO, as demanded by Kiev and favoured by the US and Britain, a circumstance that would bring the Atlantic Alliance's borders to just 500 kilometres from Moscow.

For weeks now, the US has been issuing constant warnings of a possible Russian invasion of Ukraine, which according to anonymous US intelligence sources quoted in various media, could be unleashed in January 2022. The US has shared intelligence reports with the Washington Post and then with European allies with the aim of convincing Germany and other NATO partners of the reality of the Russian threat.
A Biden administration official said that half of the Russian military units involved in the hypothetical invasion had already arrived near the Ukrainian border in the past month. According to the US, Moscow has mobilised about 100 regiments for this operation for an estimated total of 175,000 soldiers plus another 100,000 reservists deployed in the rear to support the offensive.

Kiev sources had instead reported about 90,000 Russian troops deployed between the border and 270 kilometres inside Russian territory, which is not unusual considering that the Ukrainian border is located about 500 kilometres from Moscow and that in this period the Russian army carries out major winter manoeuvres in the Western District, which extends from the Belarusian borders to the Black Sea coast.

The new tensions, however, seem to be artfully created to impose further pressure on Russia. Starting with the Ukrainian offensives in November on the Donbass front, the eastern Ukrainian region that remains under the control of Russian separatists, and Washington's decision to launch new sanctions against Moscow, mostly of a financial and economic nature. Sanctions that include (incidentally) the Nordstream 2 gas pipeline, the Russian-German project long opposed by the US and not yet in operation, which will bring Russian gas to Germany and from there to the whole of Europe via the bottom of the Baltic Sea, bypassing the gas pipelines that pass through Ukraine.

Moreover, ever since the "Maidan revolution" (or coup, depending on one's point of view) in 2014 that took Ukraine out of the Russian orbit to bring it closer to NATO and the EU, the gas issue has always been at the heart of the crisis in Ukraine, and at the time President Barack Obama did not hesitate to ask the Europeans to stop importing Russian gas.
Today, Biden (formerly Obama's deputy) seems to be aiming at military escalation with Russia with the objective of preventing the launch of Nordstream 2, digging an ever wider and deeper gulf between Europe and Russia in order to induce the Europeans to stop importing gas, which constitutes a significant part of the Russian Federation's currency income.

It is difficult to harbour any doubts about American (and British) interests, the main shareholders in NATO, supported by European nations such as Poland and the Baltic Republics, which have always been intimidated by Russian military power. By reiterating the threat of a Russian invasion of Ukraine, the US is aiming to build a new 'Iron Curtain' that will isolate Russia from Europe.

It is hard to understand how this escalation with Moscow can be in the interests of Germany and of a Europe that is already facing a serious energy crisis and that should have everything to gain from detente with Moscow, by "freezing" the Donbass front and the pro-American government's claim in Kiev to join NATO.

The High Representative of the Union for Foreign Affairs and Security Policy, Josep Borrell, said that in the event of a crisis, the EU would side with Kiev. "We are working to avoid the crisis but in the face of any eventuality, the EU will be firmly behind Ukraine", he said, calling on everyone to "reflect on the consequences".
The Ukrainian president, Volodymyr Zelensky, said that the Ukrainian army is a highly organised structure and is capable of "destroying any aggressive plan" by an enemy. In reality, despite the fact that they have been supported by US, Canadian, and British military advisors for some time, the Ukrainian armed forces would be quickly routed by a massive Russian offensive, which is highly unlikely to happen.

Putin is well aware that invading Ukraine is quite different from sending an expeditionary force with a few thousand soldiers and a few dozen planes and helicopters to Syria. Unleashing a war in Europe would be a military and economic gamble since the operation would risk leading to a confrontation with NATO and would have prohibitive financial costs by requiring massive forces to invade and then maintain the occupation of the former Soviet republic: a conflict that would also permanently block the export of Russian gas to Europe.

That said, it is clear that the Kremlin could only consider such an offensive under certain critical conditions. The first and most important of these would be the accession of Ukraine to NATO or the deployment of American and allied combat troops on Ukrainian soil: scenarios that would constitute a decisive threat to Russia's security, which has already seen the Atlantic Alliance expand widely eastwards over the last 20 years.
Moreover, how would the United States react if the Russians opened military bases in Quebec or Mexico? Just think of Washington's reactions during the 1962 Cuba crisis and later when Russian bombers and ships were frequently redeployed in Venezuela.

A second additional scenario that could trigger a Russian offensive is a Ukrainian attack that, with NATO's help, would try to retake the Donbass. Moscow's response would probably be on a limited scale, aiming to repel the attack on the pro-Russian eastern provinces or to take Mariupol, on the Sea of Azov, in order to impose on Kiev a territorial continuity between the Donbass and Crimea, annexed to Russia in 2014 in a referendum contested by the West.

While remaining in the realm of pure hypotheses, in military terms, in the event of a higher intensity conflict, Moscow could aim to reach the Dnepr River with its troops, splitting Ukraine in two, stabilising the crisis on a clear border and thus regaining strategic depth: pro-Russian Ukraine in the east, pro-Western Ukraine in the west.

This would certainly not be a painless action in terms of international repercussions, but it would be militarily feasible in a short time and with not too large forces by taking control of eastern Ukrainian provinces inhabited mostly by citizens of Russian origin (10 million Ukrainians, a quarter of the population, had dual passports in 2014), which could partly welcome Russian troops.

Finally, a conflict against Russia, a nuclear power, would put a strain on Putin's internal consensus (especially if losses were to be high) but also on the resilience of NATO and the EU, which would be forced to show concrete support for Ukraine by demonstrating that they are really ready to send their soldiers to "die for Kiev".  In fact, Ukraine is not yet part of NATO and there would be no obligation for its members to go to war to defend it.