"No more streamed Masses nor bowing to governments."

There’s urgency to return to the normalcy of Christian life. The Eucharist needs to be celebrated inside churches. Televised and streamed Masses are a far cry from a personal encounter with God. Liturgies should be respected in their entirety despite health directives, including the distribution of Communion. We must promote Eucharistic adoration and emphasize the primacy of eternal life over that of earthly life. These are the fundamental points of a letter addressed to the presidents of bishops’ conferences around the world and written by Cardinal Robert Sarah, Prefect of the Congregation for Divine Worship and with the approval of Pope Francis. But will it be enough to jump start the Catholic community after months of abuse and attention only to the anti-Covid safety regulations? 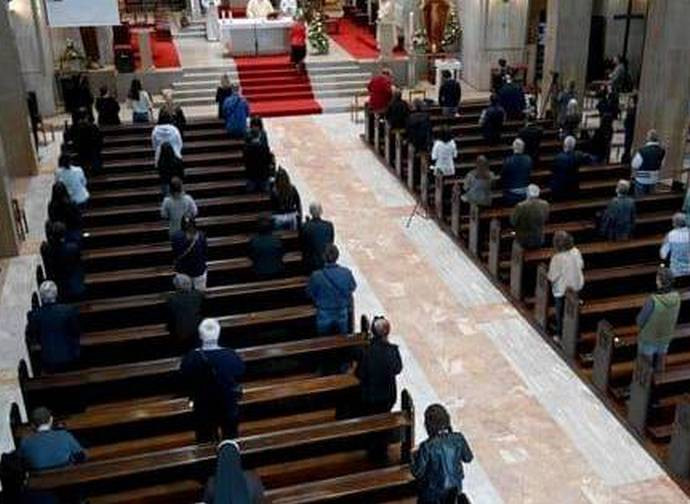 Last Saturday, September 12, the Prefect of the Vatican’s Congregation for Divine Worship and the Discipline of the Sacraments, Cardinal Robert Sarah, released a letter that had been approved previously in an audience with the pope on September 3. Sarah had written it on August 15 with the heading “Let us return to the Eucharist with joy.” His letter was addressed to all the presidents of Catholic bishops’ conferences around the world and composed. The letter’s main objective was to urge a return to “normality” in terms of liturgical rites and celebrations.

The much-anticipated letter came after months of confusion and arbitrary initiatives which have tried to make churches and celebrations ultra safe, literally germ-free. All this had had inevitable negative repercussions on the unique form of the Roman Catholic liturgy.

Cardinal Sarah begins his letter by stating, “This community dimension has a theological meaning: God is a relationship of Persons in the Most Holy Trinity. God puts Himself in relationship with man and woman and calls them in turn to relationship with Him. [...] To describe eternal life, Scripture uses the image of a city: the Jerusalem of heaven (cf. Rev 21); a city is a community of people who share values, fundamental human and spiritual realities, places, times and activities organized and who contribute to the construction of the common good." It is therefore impossible to reduce the Church’s prayer life to that of personal prayer, to replace "integral public worship" (Sacrosanctum Concilium,7) with domestic or individual religiosity.

Hence, Sarah reminds Catholic bishops that “it is necessary and urgent to return to the normality of Christian life, which has the church building as its home and the celebration of the liturgy, especially the Eucharist, as ‘the summit toward which the activity of the Church is directed; and at the same time it is the font from which all her power flows.” (SC, 10).”

Sarah refers to the example of the "brother martyrs of Abitene (early fourth century)” who answered to their executioners with serene determination, even in the presence of a sure death sentence: “Sine Dominico non possumus.” This what rings true still today. The Latin non possumus is an absolute for all times. The neutral ablative Dominico does not simply indicative of Sunday, but that all things that belongs to the Lord. The Christian community cannot, therefore, live "without the Word of the Lord, which in the celebration takes shape and becomes a Living Word, [...]; without participating in the Sacrifice of the Cross in which the Lord Jesus gives himself unreservedly to save, through his death, men who had died because of sin" and even "without the Eucharistic feast." We cannot, therefore, live without the Lord’s Day, without the Christian community, "without the house of the Lord, which is our home, without the holy places where we were born into the faith."

Thus, it is unthinkable to continue to watch Eucharistic celebrations via streaming, from our living room or bedroom: "No broadcast is comparable to personal participation or can replace it. On the contrary, these transmissions … risk moving us away from a personal and intimate encounter with the incarnate God who gave himself to us not in a virtual way, but in a real way” by saying: "Whoever eats my flesh and drinks my blood remains in me, and I in them.". (John 6: 56). “This physical contact with the Lord is vital, indispensable, irreplaceable,” Sarah writes. It is therefore urgent to remind the Church of those many, too many brothers who have been "discouraged, frightened, absent, or distracted for too long".

In addition to this general appeal, Sarah, as Prefect of the congregation he presides over, intends to reaffirm “some principles” and suggests “courses of action to promote a rapid and safe return to the celebration of the Eucharist."

First of all, it is necessary to understand that due attention to hygiene and safety regulations cannot lead to the sterilization of gestures and rites, to the instilling, even unconsciously, of fear and insecurity in the faithful.” Gestures and liturgical rites must be respected in their entirety, even in terms of those aspects that may appear "minimal", but which often have more meaning than we imagine.

In this regard, the Sarah warns against “improvised ritual experiments and in full respect of the norms contained in the liturgical books which govern their conduct.  In the liturgy, a transfiguring moment of sacredness, of holiness and beauty, takes place. One can taste the harmony of eternal bliss: therefore, one must take care of the dignity of places, of the sacred furnishings, of the modalities of celebration." It is a form attention that is proper to God, to the faith of His people, but also to the humanity of those who are disoriented and disheartened by the constant fear and anxiety that is experienced even in our churches.

The second aspect concerns the Church’s relationship with civil authorities, a particularly delicate point to which many bishops’ conferences capitulated. “It is up to the prudent but firm action of the Bishops to ensure that the participation of the faithful in the celebration of the Eucharist is not reduced by public authorities to a ‘gathering’, and is not considered comparable or even subordinate to forms of recreational activities.” Liturgical norms are not matters on which civil authorities may legislate, but “only [by] competent ecclesiastical authorities.” (cfr. SC, 22)».

There is a third important aspect, according to the letter. It regards the right of faithful “to receive the Body of Christ and to worship the Lord present in the Eucharist in the manner provided for, without limitations that go even beyond what is provided for by the norms of hygiene issued by public authorities or Bishops.” Then Sarah adds: "faithful in Eucharistic celebrations adore the Risen Jesus who is really present; and we see how one may lose a sense and prayer of adoration. We urge our pastors to insist, in their catechesis, on the necessity of adoration."

It is clear Sarah is well aware of the spectacles experienced inside churches over the last several months: Communion being denied to faithful wanting receive the consecrated Host on the tongue and not in the hand; priests being reprimanded by their bishops for having granted Communion in the universal form provided by the Church; churches where it was forbidden to kneel, etc..

As a final fundamental appeal addressed to bishop conference presidents, Sarah warns they  should not to play fiddle to ideologies. Therefore they should not to let any emergency-response decisions fall prey to today’s dominant materialist and immanentist principles: "The Church [...] recalls that earthly existence is important, eternal life is far more: sharing the same life with God for eternity is our goal, our vocation. This is the faith of the Church, witnessed over the centuries by armies of martyrs and saints, a positive proclamation that frees us from one-dimensional reductionisms, from ideologies to the dutiful concern for public health the Church unites proclamation and accompaniment towards the eternal salvation of souls."

Sarah’s letter is more than welcome advice. But will it be enough to jump start the Catholic community after months in which decisions have indeed shown a concern more for purely biological life than for immortal souls? And after hundreds and thousands of sick people were left to die without the Sacraments while complying with anti-Covid regulations? And after we accepted that access to supermarkets to find material bread and to tobacco shops to satisfy a vice was deemed more acceptable than our chance to nourish ourselves on the Bread of Eternal Life?