No more Justice and Peace in the Vatican

The Pontifical Council for Justice and Peace has not only been absorbed by the new Dicastery for Integral Human Development, but its legacy has been erased altogether. What used to be a feather in John Paul II's cap for promoting the Church's social doctrine has been transformed into a sort of welfare advocacy. 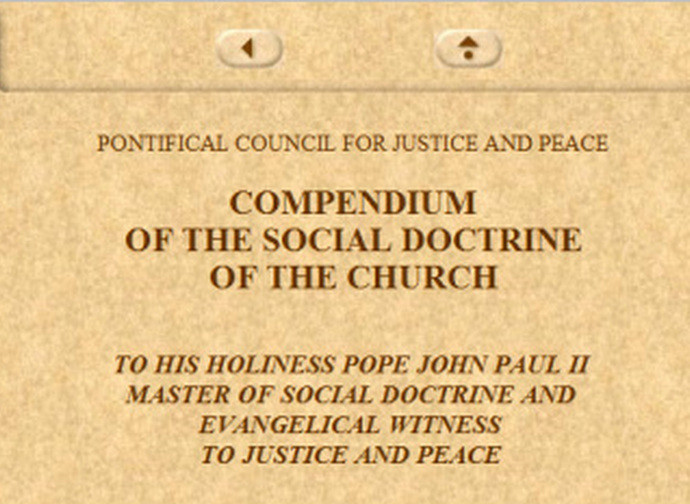 Justice and Peace was first established in 1967 by Pope Paul VI as a pontifical commission. Later on, in 1988, John Paul II  turned it into a pontifical council. According to the then-pope and now saint, the Pontifical Council of Justice and Peace "deepens the Church's Social Doctrine, striving to ensure that it is widely disseminated and translated into practice among individuals and communities, especially in terms of relations between workers and employers so that they may be increasingly permeated by the spirit of the Gospel." The business of the Pontifical Council was certainly to lead empirical inquiries into the complexities of various social issues. No doubt, it provided tools for pastoral ministers in a dialogue with real protagonists of economic, social and political life. However, all this was done in the clear guise of the Church's Social Magisterium, without which or with a far reduced vision of it, the principles of justice and peace would never be achieved.

Indeed, the Pontifical Council of Justice and Peace conducted projects on social encyclicals, like John Paul II's Centesimus Annus (1991) and Benedict XVI Caritas in Veritate (2009). It was the Pontifical Council’s responsibility to prepare drafts for the pope's yearly messages delivered on the January 1 World Day of Peace. The Pontifical Council was also entrusted with the task of preparing the Compendium of the Social Doctrine of the Church (2004), a project led first by Cardinal Francis-Xavier Nguyễn Van Thuân and completed by his successor Cardinal Renato Martino with the active assistance of the Council's Secretary, Bishop Giampaolo Crepaldi.

Justice and peace has always been the central focus of Catholic Social Teaching, understood as a doctrinal body of work, even under the Council’s long-term past president Cardinal Roger Etchegaray (1984 to 1998), despite his personal leadership being more 'spiritual' and 'prophetic' than ‘scientific’ or ‘political.’ The Holy See's Observers in international bodies in New York, Geneva or Vienna was inspired by the Pontifical Council's guidelines and, of course, by the Holy See's Secretariat of State.

Bishops in ad limina visits to Rome from all over the world never failed to visit the Pontifical Council at its Palazzo San Callisto headquarters. The Compendium of the Social Doctrine of the Church has been translated into over 150 languages. International conferences organised by the Council were always inspired by the principles of the Church's Social Teachings. In 1991, John Paul II asked Cardinal Etchegaray and then Vice-President Bishop Jorge Mejía to organise a conference for the 100th anniversary of Rerum Novarum, dedicating it to the doctrinal principle of the universal destination of goods.

With its elimination following the creation of the new Dicastery for Integral Human Development, what remains of the Pontifical Council for Justice and Peace? Has it left a legacy that is still alive even if the plaques on office doors at Palazzo San Calisto have all been switched? Such change has not only been merely organisational but also directional. The Social Doctrine of the Church has now receded into the background of the dicastery’s focus whose statutes barely mentions the Social Magisterium: "The Dicastery promotes integral human development in the light of the Gospel and in the wake of the Church's Social Doctrine." Its aims are mainly assistance in relation to issues of marginalisation.

In Francis's Motu Proprio that set up the Dicastery of Integral Human Development, the following concentrations are listed: "migrants, those in need, the sick, the excluded and marginalized, the imprisoned and the unemployed, as well as victims of armed conflict, natural disasters, and all forms of slavery and torture." It is a dicastery that no longer works for the Christian vision of human community life but rather to intervene on its wounds. The new intent, more pastoral and sectorial and less doctrinal and global, can be seen in its initiatives  focusing on ecology, migration, biodiversity, climate change, World Health Day, the urgency of vaccination, energy transition, and the UN 2030 objectives.

There is no mention of initiatives focusing on life, the family, biopolitics ... nor the classical principles of the Church's social doctrine.