«No Bishop has the right to prohibit public masses»

“The Church is not dependent on the state, it must defend its freedom and independence”. “Suspending Masses is an abdication of the task it has, which includes reading the sufferings of this period in the light of the faith, the mystery of the Death and Resurrection of Jesus”. “Jesus became flesh, we believe in the resurrection of the flesh: therefore bodily presence is indispensable”. “The Eucharist is the only true form of adoration of God, it is the reason for the existence of any other liturgical form. It is scandalous that there are bishops who say the Eucharist is overrated.” Cardinal Gerhard L. Müller, former prefect of the Congregation for the Doctrine of the Faith, speaks to the Daily Compass. 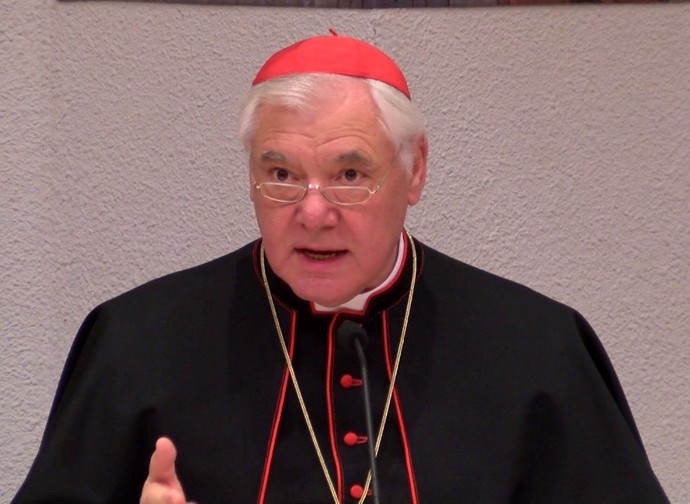 «This virus represented a tragedy for many people. This is the precise reason the Church has the duty to propose a vision of human suffering and existence, in the perspective of eternal life, in the light of faith. The suspension of public Masses is an abdication of this task, it is the reduction of the Church to dependency on the state. It is unacceptable." In a phone call with the Daily Compass, Cardinal Gerhard L. Müller, former prefect of the Congregation for the Doctrine of the Faith, is very clear in his judgement of what is happening in Italy and in many other countries.

Your Eminence, for many faithful the suffering of the disease has meant the additional suffering of the prohibition to attend Mass and the prevention of holding funerals; worse still, they find it is justified by the ecclesiastical hierarchy.
This is very serious, it’s the secularist thought which has made its way in to the Church. It is one thing to take precautionary measures to minimise the risks of contagion, it’s another to ban the liturgy. The Church is not a client of the state, and no bishop has the right to ban the Eucharist in this way. Moreover, we have witnessed priests being punished by their bishops for celebrating mass for only a few persons, this means they conceive themselves as state officials. But our supreme pastor is Jesus Christ, not Giuseppe Conte or any other head of state. The state has its task, but the church has its own.

It seems many find it difficult to reconcile their duty to the state with the need for public worship to God.
We must also pray publicly because we know that everything depends on God. God is the universal cause, then there is the secondary cause that goes through our freedom. We, finite creatures, do not know how much of what happens depends on the causality of God and how much depends on ourselves: this is the point of prayer. We must pray to God to overcome the challenges of our personal and social life, but without forgetting the transcendental dimension, that vision of eternal life and intimate union with God and with Jesus Christ even in our suffering. We are called to load our cross on our shoulders every day, but we must also explain their suffering to the faithful according to Gospel criteria. Banning participation in the liturgy goes in the opposite direction. Taking certain external measures is the task of the state, our task is to defend the freedom and independence of the Church; and the Church’s superiority in the spiritual dimension. We are not an agency subordinated to the state.

There are many, including priests and bishops, that are realising there is a strong risk of misunderstanding the meaning of the liturgy because of the proliferation of masses on TV and streaming.
These forms cannot be considered a replacement of the Mass. Of course, if you are in prison or in a concentration camp or other exceptional circumstances, you can participate spiritually in the Eucharist, but it is not a normal situation. God created us body and soul. God accompanied His people throughout history, He freed them from the slavery in Egypt, He did not perform a virtual liberation. Jesus, Son of God, became flesh, we believe in the resurrection of the flesh. This is why physical presence is absolutely necessary for us. For us, not for God. God does not need the sacraments, we need them. God instituted the sacraments for us. Marriage does not work only spiritually, there is a need for the union of body and soul. We are not Platonic idealists, we cannot follow mass from home, except in particular circumstances. No, we must go to church, meet with others, communicate the Word of God. The whole vocabulary of the Church also indicates this need: Holy communion; communion is to convene; the Church is the people of God summoned together. The psalm says: "How good and beautiful it is that brothers live together".

There are theologians and bishops according to whom the Eucharist is overrated, that Sunday Mass is not necessary.
There is also a bishop such as Victor Fernandez, who prides himself on being Pope Francis’ ghost writer, who claims that the duty to go to Mass on Sunday is a commandment that was introduced by the Church. It is another example of disastrous theological formation. The third commandment has its foundation in divine law: it obliges the Jews to sanctify the day of the Lord. For us Christians, it is the day of the Resurrection. It is also a commandment Jesus gave us: "Do this in memory of me". And Saint Paul says: "Every time you eat this bread and drink this cup, you proclaim the death of the Lord" (1 Cor 11:26). This is the real and sacramental representation of the saving death of Jesus and of His resurrection. In the mass we participate in the paschal mystery. The Second Vatican Council made this clear in the Sacrosanctum Concilium and Lumen Gentium (Nr. 11). Yet there are bishops who say that some faithful are too attached to the Eucharist. It’s absurd. The Eucharist is the only true adoration of God through Jesus Christ. It is not one of the many forms of the liturgy, instead all the forms of the liturgy have the reason for their existence in the Eucharist. Everything receives strength and consistency from the Eucharist.

Can you also see the manifestation of a clear attack on the Eucharist, the heart of the Church?
Yes. Just think of those who before and during the Synod on the Amazon said forcefully that indigenous peoples absolutely needed the Eucharist and for this it was necessary to ordain married men as priests. Now the same people shamelessly argue the exact opposite, that we don't need the Eucharist. They reason like Protestants, ignoring that the central point of controversy since the beginning of the Protestant Reformation, is the Eucharist. And now there are bishops who call themselves Catholics who do not understand the central value of the Eucharist. It is a real scandal: these are the ones who are rigid, the true clericals, not those who take the word of Jesus and the doctrine of the Church seriously. It is a perverted way of thinking. And this "modern" Catholicism is a self-destructive ideology. There is a need, especially in Italy, for bishops of the stature of San Carlo Borromeo, and whoever is in the Curia should take Cardinal Roberto Bellarmino as an example.

In recent months we have heard episcopate leaders often say that the first duty is to safeguard health.
This is a bourgeois, secularised Church, not a Church that lives on the Word of Jesus Christ. Jesus said "seek the Kingdom of God first." What is life, all the goods of the world including health worth, if you lose your soul? This crisis has shown that many of our pastors think like the world, they conceive themselves more as officials of a social religious system than as pastors of a Church that is an intimate communion with God and with everyone. We must always combine faith and reason. Obviously we are not fideists, we are not like those Christian sects that say that we do not need medicine, that we entrust ourselves only to God. Instead, entrusting oneself to God does not contradict the valorisation of all that modern medicine offers. But modern medicine does not replace prayer: they are two dimensions that should not be separated but not superimposed.

It has been said by some, as a way of justifying the suspension of public Masses, that if we infect others then we are responsible for their eventual death.
Doctors also run this risk, there is a risk in every human activity. It is certain that we must be careful not to endanger the lives and health of others, but this is not the supreme value. Unfortunately, this situation has shown us that many priests and bishops of good quality lack the theological basis for reflecting on this situation and offering a judgment consistent with the Gospel and the doctrine of the Church.

Perhaps it is also for this reason that many bishops snubbed the request of the Italian faithful for an act of Consecration to the Immaculate Heart of Mary. Which in the Italian case, then became an act of Dedication, and in the end was conducted in a negligent and fraudulent way.
There is an underestimation of the supernatural aspect. We are immersed in the naturalist conception that comes from the Enlightenment. The Church, Grace, the sacraments  cannot be explained according to the natural dimension. The heart of our Christian religion is the transcendent God who becomes immanence in our life, He is Christ, true man and true God through the Incarnation.

It’s almost as if we are resigned to chasing a world that reasons only in natural terms, and we call this realism.
It is the ideology of pragmatism. Today, for example, the idea prevails in the Church that there is a need for bishops who are only pastors, that is, pragmatic. But the bishop is minister of the Word, he must reflect on the Word. Saint Paul and Saint Peter were not fools, the fathers of the Church were not only pragmatic, they reflected on the Christian faith and its implications. A good teacher of faith must be able to explain a situation like the present one starting from faith, in its supernatural sense, not with naturalism. Once again, the two dimensions must be held together: we cannot reduce human existence to mere nature, and at the same time not even think - as Marxists claim - that Christianity is only concerned with the afterlife. In Jesus Christ we have the unity between the afterlife and the immanence of life. A good Christian should know how to be an excellent doctor and scientist but this does not contradict trust in God. There is integration between faith and reason, between trust in God and competence in the natural sciences.