Narcissus, the oldest bishop in history

He lived during the Roman domination of Palestine and was elected bishop of Aelia Capitolina (Jerusalem) at a very advanced age. Because of his moral rigour, he attracted the hatred of the corrupt, who slandered him. But the truth emerged and Saint Narcissus returned to the bishop's chair; he appointed a coadjutor – the first in history – who was also a saint. He lived to the age of 116.

- THE RECIPE: FENNEL AND ORANGE SALAD 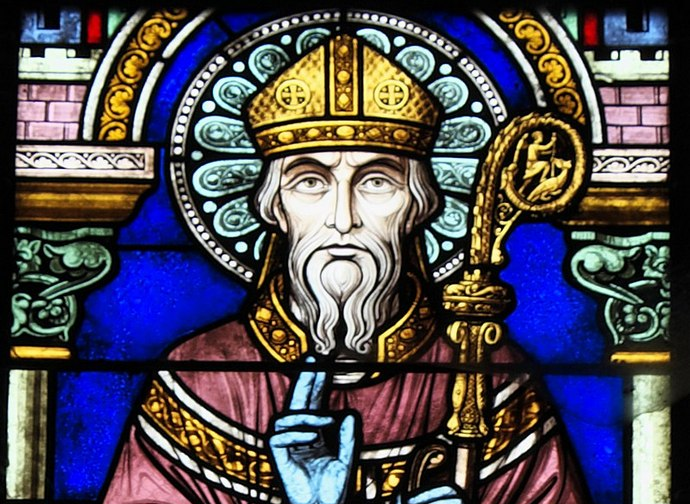 Alexander watches the old man go from one lamp to another, pouring a little water into each one and arranging the rough hemp ribbon that will keep the flame burning. He is thinking that the bishop has lost his grip on reality, perhaps because of his age: he is 116 years old... He is the oldest person Alexander knows.

Now the old man prays and blesses the lamps, then he goes round again with a lit candle and lights them. Miraculously, they light up and the flickering light makes images dance on the walls of the church. Alexander is amazed, but deep down he is not too surprised, he is used to the uniqueness of this man who is an example for him and whose helper he has been for some years now. This scene describes a miracle: the transformation of water into oil, by Narcissus. 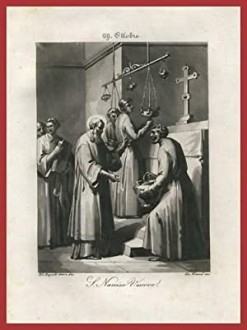 Alexander was to become Saint Alexander of Jerusalem (date of birth uncertain, year of death approx. 250 A.D.). The elder is Saint Narcissus (99-216 A.D.: yes, you read that correctly), bishop of Jerusalem; that day is Easter 215 A.D. (Alexander later succeeded him as head of the diocese).

Alexander and Narcissus live in a very particular period of Christianity in Palestine. Palestine was a Roman province and as such was the scene of tragedies linked to the fate of the Christians: the Roman emperors were generally not supporters of this “new” religion. Although Christians were a minority, they were an important social component. A British statistic of 1931 shows Christians as an educated community (they represented only 10% of the Palestinian population, but made up 27% of the schooled population), predominantly urbanised, engaged in trade and crafts, and offering more opportunities to women. Women occupied a special place, facilitated in their adherence to the new faith by the fact that they were not bound by "difficult" professions, such as soldiers, teachers, or politicians, and by the very nature of the Christian community, which was based on a concept of universal brotherhood that offered them dignity and equality generally unknown in ancient society.

The spread of Christianity took place mainly among free people of the most humble condition or among members of the middle class which, in the society of the time, in addition to the freedmen, included free citizens such as merchants, craftsmen, and others from the colourful world of manual professions. They were people who did not generally have access to higher education, even if they had a basic education - they could read and write more than other sections of the population, as we have seen above - and who enjoyed modest personal property. Christianity was often excluded from the upper classes, partly because political offices inevitably entailed a series of religious tasks, such as public sacrifice, which in the eyes of a Christian could not fail to appear idolatrous. The essential elements of worship were: listening to the teaching of the apostles, fraternal communion and baptism, which was usually administered by immersion to those - male and female - who personally confessed their faith. It was only around the fourth century, when baptism was brought forward to the first days after birth, that a special form of blessing took place with the laying on of hands and the invocation of the Holy Spirit on the child.

In this context lived Narcissus, a man of deep faith, an extraordinary priest, loved but also reviled by those who felt inadequate and not in line with the demanding standards he preached. Around the end of the second century, already at a very advanced age, he was elected bishop of Aelia Capitolina (Jerusalem). Around 195, together with Theophilus, Bishop of Caesarea, he presided over a council of all the bishops of Palestine to establish that Easter should fall on a Sunday, according to the Roman custom. In spite of his age, he was an active bishop and present in the life of the community. For almost a century, Narcissus saw the city of David rise and repopulate, hosting, alongside the Jews, a large Christian community. Narcissus, with his sometimes inflexible morality, set the bar of values very high, thus attracting the hatred of the corrupt and dishonest, who felt threatened by his severity. To defend themselves, they decided to attack him, spreading a terrible calumny about the very old bishop. The sources do not specify what kind of calumny it was, but we know that it was confirmed by solemn oaths on the part of the accusers. Not all the faithful believed the insinuations, but to avoid any scandal, the old bishop, although innocent, preferred to leave the city.

The perjurers, one by one, were struck by terrible misfortunes, until one of them confessed the truth and revealed the lie. However, everyone thought that the rehabilitated bishop had died in the meantime, so another was elected to succeed him and, after this, another. When the second one died, Narcissus reappeared in Jerusalem, and the faithful reinstated him on the bishop's chair with great honour. He remained there for several more years, but took a coadjutor, the first in the history of the episcopate, according to a custom that still continues. This was none other than Alexander, thanks to whom we know the later news about the long-lived bishop of Jerusalem: "Narcissus greets you. He is one hundred and sixteen years old, and he exhorts you, as I do, to maintain peace and harmony".

The story of Narcissus is emblematic, not only for the great moral value of his life, but above all for the courage that characterises him. How many people would have the strength to make such a commitment as a bishopric at over a century of age? Especially at a time when the average life span was 38 years. And yet, he did, showing that old age need not be a limitation, especially when serving the Lord.