"My mother, Saint Gianna, God's answer to the world’s attack on life"

For the 100th anniversary of Gianna Beretta Molla's birth, the Daily Compass spoke to her fourth child, the daughter who was born thanks to her sainted mother’s heroic sacrifice. Today Saint Gianna is "a precious gift from God for everyone", together with her husband Pietro: a married couple and parents who represent "Our Lord's answer to today's world" which continues to attack marriage, family, and life. 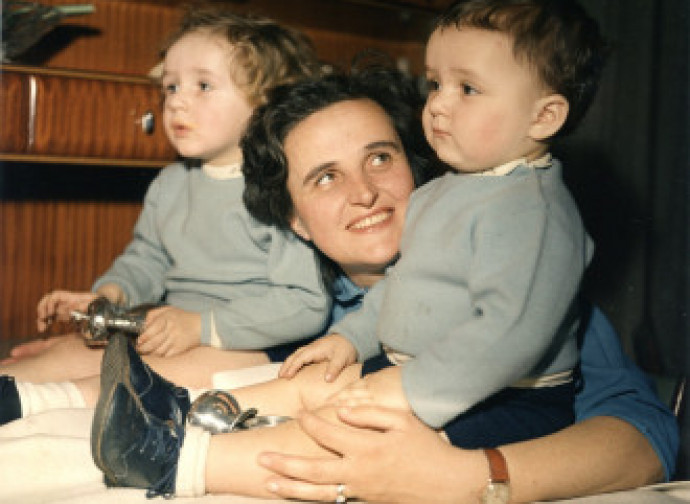 On 4 October one hundred years ago, Gianna Beretta (1922-1962) was born in her paternal grandparents’ country house. The paediatrician, mother, and wife of engineer Pietro Molla, was canonised by John Paul II in 2004. A canonisation that was the natural fruit of a life lived in the daily exercise of the theological virtues (faith, hope, charity) and cardinal virtues (prudence, justice, fortitude, temperance), up to her extreme gift, which was acknowledged even outside the Church: she was already the mother of three children and with two more in Heaven, when a fibroma was discovered in her uterus, but she rejected - with heroic abandonment to Providence - both the idea of having an abortion and that of undergoing treatment that could have been harmful to the baby she was carrying, Gianna Emanuela. The saint survived for just seven days after giving birth before returning to the Lord on 28 April '62, Saturday in Albis.

On the occasion of the 100th anniversary of Saint Gianna's birth, the Daily Compass interviewed her beloved fourth-born, Gianna Emanuela, who also offers us an intimate look at the saintliness of her father’s life, Pietro, who died at the age of 98 in 2010.

Gianna Emanuela, 100 years have passed since your mother's birth and 60 since her death, shortly after giving birth to you. What meaning do you give to this period of time, retracing your mother's story and also your own?
Looking back on my mother’s story, and also my own personal one, it confirms what my father, reflecting on his long life, always told me: “There is a very precise plan of Divine Providence for each of us! If your Mum had stayed here with us”, Dad told me, “she would have continued to do good to her family, her neighbour, and the sick, but the Lord wanted your Mum to do good to many, many more people, in many parts of the world”.
I have truly lost count of all the graces received in the world through her intercession! By her exemplary Christian life and death she gave praise and glory to the Lord; by her powerful intercession she continues to give glory to the Lord, and the Lord testifies to His infinite love for us also through her intercession. I believe that my Sainted Mother, actually, my saintly parents, are a precious gift from God for everyone and represent Our Lord's response to today's world, in which the Sacrament of marriage and the family according to the divine plan are increasingly under attack, as is the sacredness of human life. Personally, I have welcomed with great joy and enthusiasm the new mission that the Lord has entrusted to me, after that of geriatrician, to be an instrument in His Holy Hands to help my neighbour by promoting the exemplary testimony of my parents.

When you were a child, how did your siblings and family members talk to you about her? And what was it like to grow up gradually realising, with the steps taken by the Church, that your mother was a saint? 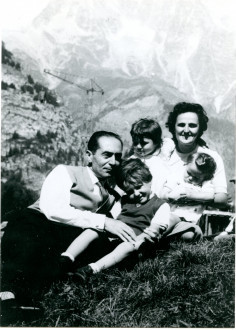 When I was little, everyone told me that my mother was in Heaven, a reality difficult for me to fully understand. It was mainly my father who told me about her - I can say that he thought about her every day - and he managed so well to keep her memory very much alive, and above all to make her a ‘physical’ creature on this earth as well as to know her as protector in Heaven: when he passed away, it was as if I had also lost my mother for a second time.
It was my father who explained to me, when I grew up and was able to understand my mother's extreme sacrifice, why she made this choice, helping me to overcome the feelings of guilt I had towards my siblings and also towards her, ever since I was a child, and to reassure me. For her, he told me, I had the same rights to life as my brothers and sisters already born, and she knew well that she alone, at that moment, represented the instrument of Divine Providence for me to come into the world; for the care of my brothers and sisters, their upbringing and growth, she relied fully on Providence through him and other family members.
The Cause of my mother's Beatification and Canonisation involved, especially for me, so much suffering. Today I can say that I really do not know how to thank the Lord for the singular and immeasurable gift, as my father always called it, of having 'given us back' a Spouse and a Mother who was a Saint, to share with the whole world. To have a Mother proclaimed a ‘Saint’ by the Church is a grace from God that is truly more unique than rare! It is an immense joy, a profound honour and also a great responsibility. Every morning when I wake up and open my eyes, after giving thanks for the gift of life, I pray to the Lord, the Virgin Mary, and St Joseph to help me be the least unworthy possible of my saintly parents.

What can you tell us, from your experience as a daughter, about your father's 'posthumous' relationship with your mother, that is, when she was already in Heaven?
A few months after my mother went to Heaven, my father wrote a long letter to my uncle Father Alberto, Mum's brother and a Capuchin missionary doctor in Brazil, of whom he was very fond. The letter ends with this beautiful prayer to Mother: "... And you, Gianna, help me day by day, to carry my Cross, to do, in a heroic way, the Lord's will. Obtain also for our children and for me the divine grace to become saints. Grant that each day may bring us closer to you, and each day we may climb a step of Jacob's mystical ladder, at the top of which you await us. And grant that when the Lord calls us to Himself, He may find us worthy to come closer and closer to you forever. And so be it". 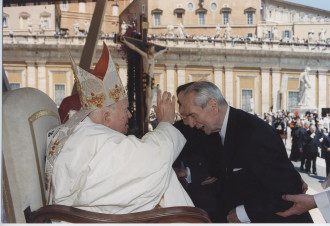 I had the grace of living 48 years of my life with my father, and I can testify that my mother heeded his prayer: she helped him, day by day, to carry his cross, and to do, in a heroic manner, the Lord's will; and when the Lord called him to Himself, he was more than worthy to live with her forever! By His will, my parents only lived their married and family life together for six and a half years, then Mama went to Heaven; during the 48 years that Papa lived without her visible presence, they continued to be one heart and one soul, spiritually very united and in communion: true love, which is love that lasts forever, is truly much stronger than death.
I remember that my father prayed a great deal, and that he continued to thank the Lord, for everything; it struck me that, although he had suffered tremendously in his long life - just think that only two years after the death of his beloved wife he also lost his Mariolina, my elder sister, at a tender age - he always told me: "Eternity will not be enough for me to thank the Lord for all the graces He has given me in my long life", referring, in particular, to having been able to attend, at the age of 92, the proclamation of my mother as a 'Saint' by St John Paul II in St Peter's Square in Rome on 16 May 2004. It was the first time in the history of the Church that a husband was present at the canonisation of his own wife!

Our Lord gave us salvation through the Cross, even if this is still rejected by the world today. What do your parents teach us about the way of the Cross?
The lives of my saintly parents teach us that the way of the Cross is certainly the right way for us to follow, so that one day we will be able to enjoy the joy of Paradise, the joy of the vision of God, and forever. The way of the Cross, closely united and inseparable from the way of the Resurrection, as our Lord Jesus witnessed and indicated, is humanly the most uncomfortable and the most difficult; nevertheless, I think it is the only way that allows us to give full and complete meaning to our lives. It presupposes, as our Heavenly Mother has well taught us, our unconditional and continuous 'Yes' to the Father's will, the humble acceptance of His holy will, always and in any case, even when we do not understand it.
The life of my saintly parents teaches us that the way of the Cross is certainly also "the way of joy", the truest and deepest one, the prelude to that joy, even greater and deeper, of one day being able to enjoy the vision of the Lord, and forever... And to have the Lord in our hearts, to do His holy will, to see everything that happens to us in the light of faith, leads us, although walking the way of the Cross, to joy, and to feel the duty to thank, and continually, our Lord, for everything, for every breath we take - as my father taught me -, for every gift He gives us... even that of suffering. 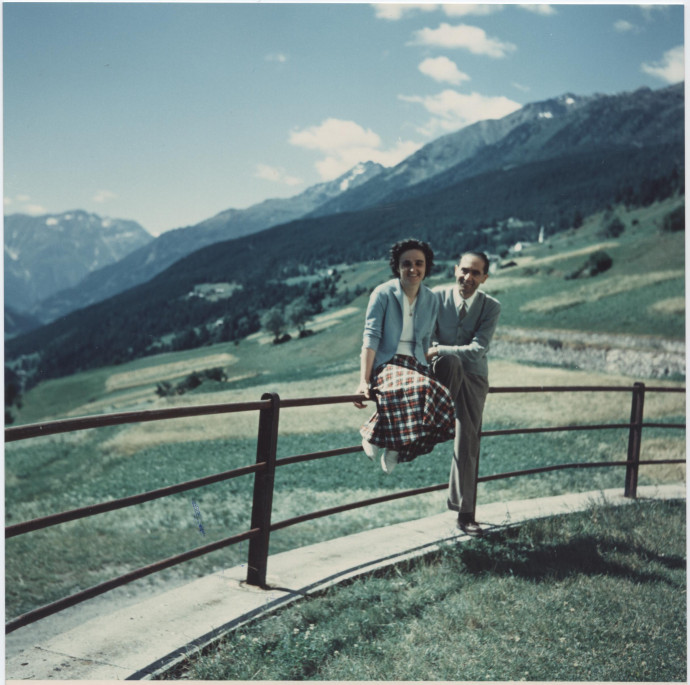