Müller’s warning: the Papacy is in grave danger

The power of the media has contributed to the present considerable confusion in the Church about the meaning of the Papacy. On the one hand, the renunciation of Benedict XVI has engendered the idea of the coexistence of ‘two Popes’, which is absolutely inconceivable. On the other hand, Pope Francis, between the relativisation of his role and ‘paradigm shifts’, risks preaching ‘a human brotherhood without Jesus Christ’ and engaging in a dialogue with Islam under the banner of religious relativism. It is necessary to rediscover the Christ-centred character of the Papacy. Cardinal Gerhard L. Müller publishes an article on the true meaning of the Papacy.

- THE FULL TEXT OF MÜLLER’S SPEECH (IN GERMAN) 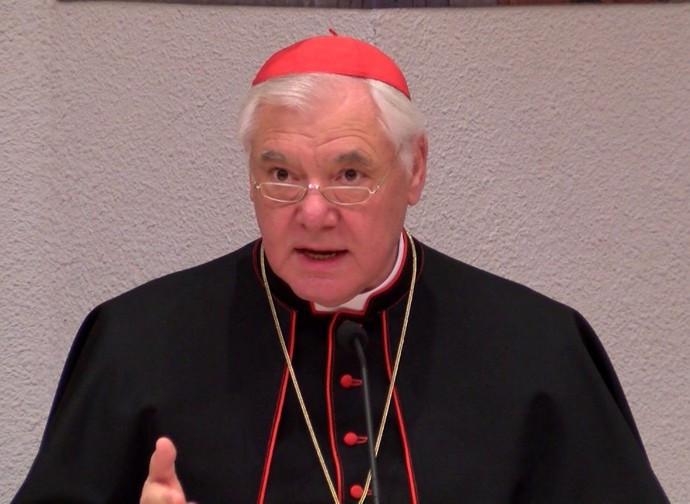 “The reason and centre of the Petrine ministry is the confession of fidelity to Christ”, centredness that today seems to be called into question by the many events that are characterising the Chair of Peter.  This is what prompted Cardinal Gerhard L. Müller to write a new, short essay entitled “The Christocentrism of Peter’s service or why there is only one Pope”, which The New Daily Compass publishes in full in Italian.

Cardinal Müller sees the great risk in the Church of the loss of the meaning of the Papacy under the pressure of the “predominance of the media”, which inevitably offers greater communicative power to images and news than to theological criteria. Predominance that Francis’ pontificate willingly privileges, given that “he has increased the number of collaborators of the Dicastery for Communication thirtyfold compared to the Congregation for the Doctrine of the Faith, which for the Magisterium of the Popes is far more important”.

This preponderance of the media then becomes powerfully distorting in conjunction with some objectively controversial situations concerning the Papacy: on the one hand the renunciation of Benedict XVI and the claim to an unprecedented papacy emeritus; on the other hand the ‘revolutionary’ intention of Francis’ pontificate.

In the first case, the former Prefect of the Congregation for the Doctrine of the Faith views with concern the perception of the existence of “two Popes”, which is highly misleading, creating among other things an antagonism that is detrimental to the Church.

There is and can be only one Pope, Müller explains, there cannot be two successors of the Apostle Peter: “Two persons cannot embody ‘the perpetual and visible principle and foundation of the unity both of the bishops and of the multitude of the faithful’ (Lumen Gentium 23)”. The German cardinal continues: “The Bishop of Rome is the successor of Peter only as long as he is alive or until he has voluntarily resigned”. So “with the voluntary renunciation of office, the papal prerogatives or full Petrine powers also definitively expire”.  Müller concludes: “Every bishop of Rome is successor of Peter only for that time in which he is the current bishop of Rome. He is not the successor of his predecessor and therefore there can never be two bishops of Rome, two popes, and two successors of Peter at the same time”. So the theological understanding of Benedict XVI’s position remains to be clarified.

But the greatest challenges to the Papacy seem to come from some of Francis’ choices. Beginning with the changes to the Pontifical Yearbook where the characteristics of the Petrine ministry have been downgraded to “mere historical titles”, a choice that “from a dogmatic point of view is very questionable”. Müller continues, “The titles ‘successor of Peter, the Vicar of Christ, and the Visible Head of the whole Church’ (Lumen Gentium 18) mark the intrinsic truth of the Roman primacy, even if these titles have only been applied to the Roman pope over time”.  The removal of those titles is therefore not a manifestation of humility, far from it: “Humility is a personal virtue,” says the German cardinal, “which is very well suited to every servant of Christ. But it does not justify a sort of relativisation of the full powers that Christ transmitted to the apostles and His successors for the salvation of men and the building up of the Church”.

“Just as Peter is not the centre of the Church”, says Müller, “nor the central point of Christianity (sanctifying grace and divine sonhood), so too, however, the successors to his Roman Chair are, like him, the first witnesses to the true foundation and the only principle of our salvation: Jesus Christ, the Word of God His Father made flesh”.

There is therefore a uniqueness and irreducibility of the Pope’s task and of the Church’s mission - “‘The Church of the living God, pillar and ground of the truth’ (1Tm 3, 15) is the witness and mediator of God’s irrevocable self-communication, as truth and life of every man” - which is put at risk by another very evident temptation: that of reducing his task to the earthly order.

Quoting Vladimir Solov’ev’s “A Short Story of the Antichrist”, Müller recalls that the Church “cannot subject itself to the general aims of a new religious-moral and economic-social world order, created by men, even if its ‘creators and guardians’ were to recognise the pope, for honorary reasons, as their spiritual guide”. The references are obvious. But the former prefect of the Congregation for the Doctrine of the Faith does not stop there, he also attacks some expressions that have become typical of this pontificate: “Neither in the doctrine of the revealed faith nor in the sacramental constitution of the Church can there be ‘revolutions’, according to a political-sociological language, or scientific-theoretical ‘paradigm shifts’”.

But human brotherhood, as it is commonly communicated and perceived, is also a problem: “Any appeal to a ‘universal brotherhood’ without Jesus Christ, the one and only true Saviour of mankind, would become, from the point of view of Revelation and theology, a mad rush into no-man’s land”.

Therefore, no “pluralism and religious relativism in the desire for truth” and, above all in relations with Islam “we must say frankly that Jesus Christ is not ‘one of the prophets] (Mt 16:14), which would take us back to a common god beyond self-revelation in the Son of God made man, ‘as if’, outside the teaching of faith, in the void of religious sentiments - according to empty religious words – ‘deep down we all believe the same thing’”. Müller continues, “Only Jesus reveals in divine power the mystery of God: ‘All things have been delivered to Me by My Father, and no one knows the Son except the Father. Nor does anyone know the Father except the Son, and the one to whom the Son wills to reveal Him’ (Mt 11:27)”.

Finally, Müller says, “This is Christocentrism, around which the Petrine ministry revolves, that is, the primacy of the Roman Church, which gives this ministry its irreplaceable significance for the Church in its origin, its life and its mission until Christ’s return at the end of time”.