Ms Metsola, from pro-life to abortionist. For power purposes alone

The election of Roberta Metsola from Malta as the new president of the European Parliament, by a healthy majority of the votes cast, is not good news. Yesterday, those who cheered her anti-abortionism were soon forced to change their minds after hearing what she had to say about "reproductive health" and "nationalism". And then there is her commitment to LGBTI rights. 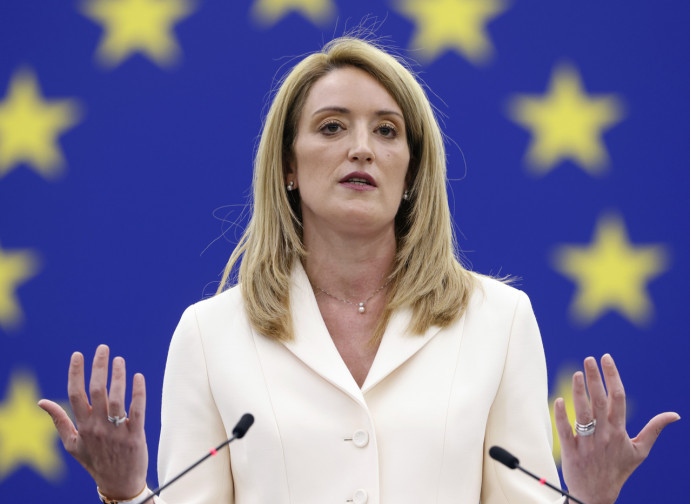 The 705-member European Parliament yesterday elected the popular Maltese politician Roberta Metsola as its new president. She was elected with a clear majority of 458 votes out of 616 cast. She also turned 43 yesterday and is the youngest president in the history of the European Parliament, and the first woman in the last 20 years, preceded only by Simone Veil and Nicole Fontaine.

Those who evoked the new president’s anti-abortion position  had to change their minds immediately. In her inaugural speech, she immediately warned against forms of 'nationalism' and, not without a certain amount of ambiguity, stated she would fight against the forces that challenge 'our European values and principles', clearly warning those who “seek to destroy Europe, that they had to know that this house [Parliament] is against you”. What European values and principles are, and how the new president of the European Parliament understands them - whether those embodied in the letter of the law (i.e. the  Treaties) or those we have seen being imposed during the last few years of exasperated LGBTI and pro-abortion centralism – has deliberately not been clarified.

Only time will tell how Ms Metsola will understand her role. However, it is foolhardy to rejoice over the election of an anti-abortion Catholic, as many did yesterday. The facts show that Ms Metsola is clearly one of the most transparent promoters of gender ideology and LGBTI dogma. Here are a few examples of this dotting her political career. On 23 September 2019, together with MEP Tery Reintke (co-chair of the LGBTI Intergroup), Commissioner Vera Jourovà, several ministers and undersecretaries, she had taken part in the conference on the Advancement of LGBTI Rights organised by ILGA Europe (a LGBTI lobby) and the Finnish rotating presidency of the Council of the European Union ; a few months earlier she had signed Ilga's 'Electoral Manifesto of LGBTI Commitments', as she had done in the 2004 electoral campaign. It is no coincidence that the socialist leaders accepted to support Ms Metsola in exchange for a commitment on political priorities with the EPP and Renew Europe, and five of the 14 posts of vice-president of the Parliament, as well as the head of the Conference of Committee Chairmen, a key position traditionally held by the EPP, that coordinates work among the various committees of the Parliament and indirectly also affects the calendar of the work of the Assembly.

Everything is clear, the LGBTI dogmas and opposition against Christian countries will only increase in the next two and a half years. Ms Metsola will presumably do neither more nor less than what David Sassoli did during his term of office. President Ursula von der Leyen, Commissioners Helena Dalli, Vera Jourová and Franz Timmermans can be sure they have an ally. The cooperation pact will be even stronger, precisely because of the overwhelming power granted to the Socialists in the parliamentary committees, where dossiers and resolutions are prepared for the Assembly's vote. The jubilation over an anti-abortionist as president of Parliament is therefore misplaced: Ms Metsola herself made this clear a few minutes after her election when she met with journalists from international newspapers.

In spite of the factitious journalistic polemics highlighting her anti-abortionism, based in fact on many of her statements and votes against all the European Parliament's pro-abortion documents (see the Matić Report), the newly elected president, when pressed at a press conference by questions about what she planned to do about abortion, replied without hesitation: "The European Parliament is unambiguous on all sexual and reproductive health rights. It has repeatedly called for these rights to be better protected. Only last month we stressed that access to sexual reproductive health services is an essential element in achieving gender equality and eliminating gender-based violence. This is the position of the Parliament and I can confirm my commitment to all of you that this is the position I will promote and have already defended when entrusted as Vice-President to represent the Presidency of the Parliament".

On the issue of abortion, Roberta Metsola's conscience, battles and convictions have been set aside, while her position and role have taken the upper hand: the new Ms Metsola is an abortionist and will support the folly of those parliamentary resolutions that mortify countries like Poland and her own homeland, Malta, where abortion is forbidden. Therefore, in order to climb the career ladder in politics, do Catholics have to abandon the non-negotiable principles? No, and the cases of the courageous presidents of the Republic of Malta (George William Vella is ready to resign if an abortion law is passed), Portugal (who has twice refrained from signing the law on euthanasia), Ecuador (who has declared his veto on the possible liberalisation of abortion in the country), and the politicians in government in Poland (on the right to life and the fight against LGBTI dogmas) and Hungary (on educational freedom and the ban on LGBTI indoctrination) show and tell us that it is possible to serve God before Caesar's cows.

In conveying the most sincere wishes for excellence in the work awaiting her and assuring Roberta Metsola of the same copious prayers that we recited for David Sassoli, also when he was alive, we just want to remind her that even as President of the European Parliament, God always sees her. We will gauge her performance by the facts, but her change of position on the human life of the conceived for the sake of power is unacceptable.