Montessori, an “educative method” that does not educate

On August 31, 1870, 150 years ago, Maria Montessori was born in a little town in Central Italy. She was a doctor, a pedagogist, a child neuropsychiatrist, educator and philosopher, a committed feminist, and is universally known for the educative method based on spontaneity that bears her name. There are more than 20,000 schools named after her throughout the world, above all in the United States, Germany, and Great Britain. The author of numerous essays, she nearly won the Nobel Peace Prize. But in reality the Montessori approach is destructive for the education. 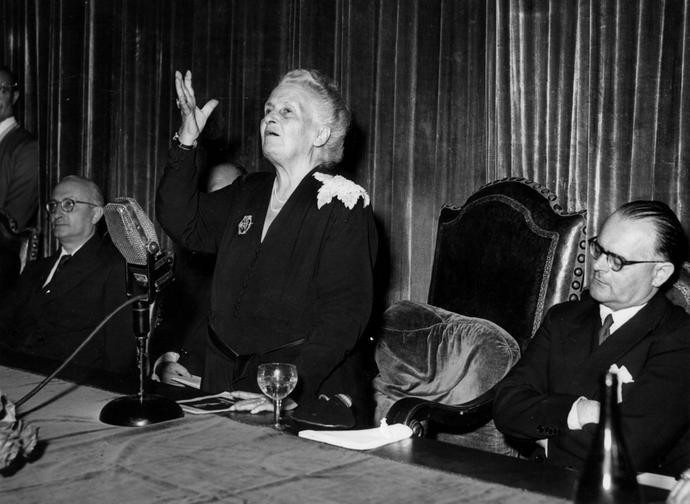 In 1910, she opened a house for children in the convent of the Franciscan Missionaries of Mary in Rome, and she got in tune with the Superior General, Mother Marie de la Rédemption. Some years later, in 1916, while she was participating at Mass on Christmas night in the church of Nostra Signora del Rosario di Pompei in Barcellona, where she was living at the time, she was moved to tears when she heard a Christmas song.

These two episodes in the biography of Maria Montessori (1870-1952), are the exception rather than the rule. Although she was born and grew up in a family of believers – her parents were liberal Catholics sympathetic to the ideals of the Risorgimento – the celebrated child educator’s relationship with Christianity was in reality only occasional and superficial; it never deepened by being translated into a lived experience and did not at all affect her vision of the world and her choices, if anything it was conditioned by other cultural and ideological references such as positivism and theosophy.

It’s true, she recognized the importance of the spiritual dimension in the growth process of little chldren, but for her the divinity had cosmic and pagan characteristics, nothing to do with God Incarnate in Jesus Christ and living as part of the Church. Moreover, that moment of emotion on Christmas night was perhaps only nostalgia for a far off childhood, while her collaboration with the Franciscans of Rome sprang not so much from an identical educational concern as from the fact that those religious helped children who were orphaned after the devastating earthquake in Messina in 1908: a humanitarian initiative in which Montesssori, attentive to the social tragedies of her time, recognized herself. Furthermore, the aforementioned superior general of the Franciscans was close to Modernism, which in those years threatened doctrine and the fundamentals of the Catholic faith.

Maria Montessori was herself influenced by the Modernist theories then in vogue. She openly manifested her aversion to the idea of original sin. Like many intellectuals of the past and today, who are perhaps well-educated and intelligent but presumptuous, she too felt obliged to give lectures to the centuries-old ecclesial Magisterium: thus the notion of original sin was in her opinion incompatible with the “purity” that she saw in children. Nor did she accept that in a child’s educative path there should be an authority that rewards and punishes, which she wrongly identified as an expression of momentary power: of parents, of teachers, of the state. The child, with the help of opportunities and original educational instruments that she invented, is instead to be accompanied in order to individualize in himself the qualities and resources he possesses, in order to make them emerge.

The teacher remains in the shadow, he is only an instrument, a means on the journey of self-discovery. No masters of life to follow, no objective values with which to confront oneself. Education is no longer an encounter, nor a risk, but a mechanism to apply, albeit in an elastic way, adapting to the characteristics of each student: creativity is exalted above all else, without any organic link to all of reality, without seeking for a meaning, a significance to be given to things. Obviously the Montessori method does not envisage any “educating community” that unites schools, families and institutions with a common objective, because what matters is putting the spotlight on individuals and strengthening them, as if they were laboratory products. We are light years away from Don Bosco’s educative masterpiece, the preventive system based on reason, religion, and kindness, which still aims today at forming good citizens and not geniuses without any true tie to the social context, creatures of God and not individuals deprived of roots.

Maria Montessori was accused of being sympathetic to Fascism and of having sought the support of Mussolini, who initially supported her schools, trying to turn them into propaganda instruments for the regime. The attempt failed, and “the woman who revolutionized the world of education forever” was forced to leave Italy, where she returned only after the war, a few years before her death, after she had traveled half the world to make her ideas known and to create a movement that would spread them. The success of these tours from one country to another is undeniable. It was during these trips that she made important contacts, such as with Mahatma Gandhi, who enriched her ideological baggage, making it even more complex and heterogeneous.

We can say that her intuitions, her idea of school, education, formation, and society were all prophetic, but in a negative way: they in some way preceded and in other respects helped to create the rather bleak spectacle we are witnessing today, where idols reign that are only apparently in favor of the human person.

Montessori believed in environmental education, but this has been changed today into a pounding environmentalist fundamentalism; she supported education for peace, but the result is an abstract one-way pacificism that ignores the true dictatorships; she believed in education for globalization (with the aim of abolishing borders), but we are reduced to undergoing a totalitarian globalism that suffocates every identity. In short, a delusion, well-disguised by an acritical and hagiographical story line that does not help people to understand the limits and contradictions of a “master of suspicion” intent on frustating – with her ideas and works – the natural structure of human coexistence, beginning with the figure and role of woman. To the point that current supporters of, for example, divorce and voluntary abortion easily find a point of reference in her because as a proto-feminist she supported the most radical freedom of choice and self-determination, outside of every pre-established scheme and every prejudice.

The novelty is that now she has also become the idol of the LGBT movement, which fights against so-called gender discrimination. Why? Because the Montessori method does not provide for differentiated male-female paths. In fact, the teaching aids are intentionally neutral (no dolls or toy soldiers), there are no distinguishing colors (pink and blue) in the classrooms or the clothing of the schoolchildren, there is no competitiveness, with the risk that males will prevail, because no weight is given to votes and judgments. In addition, there is no fear of encouraging differentiated behaviors according to sex, because the predominantly practical approach of the method means that everyone learns, for example, how to do domestic chores.