“Midrar is alive and growing. Why are English doctors saying he’s dead?”

Since last September Midrar Ali, 4 months old, has been in Saint Mary’s Hospital in Manchester, where doctors want to take him off life support. The hospital’s diagnosis is “brain stem death”. But the family dispute it. And the father, a biomedical scientist named Karwan, tells the New Compass: “My son’s heart is beating, his circulation is working. He perspires, keeps growing, and now weighs seven kilos. How can they claim he’s already dead?” On January 22 the hearing before the Court of First Instance ended, and now we are waiting for the verdict of the judge who will decide on Midrar’s life. 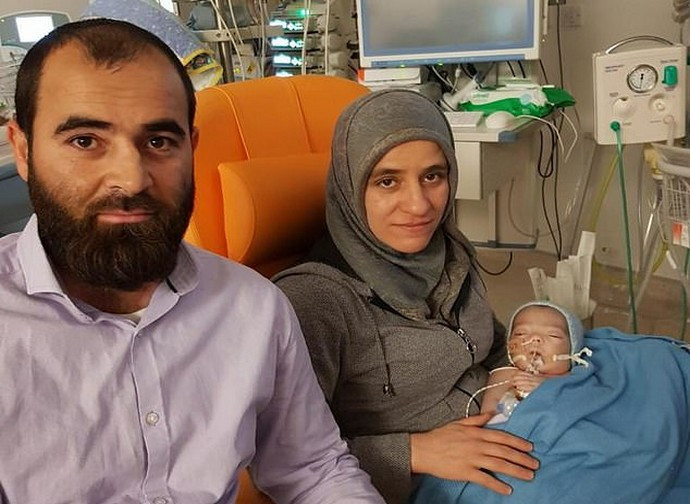 “My son Midrar’s heart is beating, his digestive system is working, he is perspiring, he is still growing, and now he weighs seven kilos, more than the doctors expected. How can they possibly claim he’s already dead?” Despite the anguish over his son’s situation, Karwan Ali, a 35-year-old biomedical scientist living in England but originally from Iraqi Kurdistan, responds with lucidity to questions from the New Compass, which contacted him by telephone. His little son Midrar, born last September 18, is now four months old and is hospitalised at Saint Mary’s Hospital in Manchester, after suffering a serious brain injury due to a lack of oxygen, in turn due to complications at his birth.

The British hospital, based on three tests conducted shortly after the birth, claims that Midrar’s situation falls within the criteria of “brain stem death” and wants to remove his ventilator. But Karwan and his wife Shokhan, 29, are opposed to allowing their son’s life to be taken, and persist in asking the Hospital to continue his treatment.

Thus began yet another legal battle in the UK between the National Health Service on the one hand and the family of the child being treated on the other. All this in the very days when news from Italy emerged of the improvements of Tafida Raqeeb, the five-year-old English girl now admitted to the Gaslini Hospital in Genoa after her parents managed to obtain permission from the judge to transfer her from the medical facility - the Royal London Hospital - that wanted to take her off life-support.

In December a preliminary hearing was held before the Preston High Court (Judge MacDonald). And from 20 to 22 January the actual hearing was held, at the end of which Judge Nathalie Lieven informed us that she reserves her judgement. Her verdict should be announced very soon .

Midrar’s case is unusual: it is different from Tafida’s and those of Alfie Evans, Charlie Gard and Isaiah Haastrup. The difference is the already mentioned diagnosis of “brain stem death”, which, according to the health trust that includes Saint Mary’s Hospital, makes a statement on the “best interests” of the child superfluous, for the reason that the child is already considered dead. But the family disagrees with the diagnosis and dad Karwan, with his expertise in biomedicine, explains why: “The brain stem regulates the circulation and heartbeat, and these two functions in Midrar are perfect. I asked the doctors to explain how this is possible in a ‘brain dead’ patient, but they couldn’t give me an answer. And the concept of brain stem death is different from that of complete brain death”.

After all, the various concepts of “brain death” are full of ambiguity and do not conform with actual death, according to the explanation given by experts interviewed on the subject by the New Compass (see our in-depth analysis).

Given the uncertainty about Midrar’s medical situation, which is serious but stable, the family’s lawyer, Bruno Quintavalle, had argued for an adjournment on the first day of the hearing in order to have the opportunity to gather more evidence on the case and to have experts testify. Quintavalle also explained that not all the documents of one of the tests were made available to the parents and indicated that the possible use of a sedative may have altered the results. But Judge Nathalie Lieven rejected the request for referral with the following words, reported by the Daily Mail: “The parents’ desire is to continue ventilation, and this position is perfectly understandable, but I must consider whether further material would help me decide the case. As the tests currently stand, I don’t think it would”. Lieven, the same judge who decided in the summer to force an abortion on a mentally handicapped young woman (which was overturned on appeal), also said that Midrar’s case does not raise “any new points in the law”.

For his part, as reported by the BBC, health trust lawyer Neil Davy argued in court that maintaining life support for Midrar would be contrary to his dignity and that there should be no further delay in disconnecting the ventilator because the child’s organs would be deteriorating.

The latter thesis is categorically denied by Karwan, who, speaking with the New Compass, also pointed out some small progress made by the child, together with the “signs of life” he continues to show. Among the most evident - in addition to his regular heartbeat and evident body growth – were those manifested during the circumcision practised last week. “Midrar perspired profusely, his face turned red and he opened his eyes for the first time”, says his father. The doctors at St. Mary’s couldn’t deny these phenomena, but believe they were simply due to reflexes.

Another point of contention concerns the growth of the child’s head. A doctor, who remains anonymous, said at the hearing that “he is growing, his body is growing but his head is not growing. It’s getting smaller”. This is also a lie, according to the family: moreover, from the most recent images, including those of the day of circumcision (see this adjacent photo sent to us by his father), the child’s physical development appears normal. In fact, Karwan tells us that when it came to finding him a hat, it wasn’t easy, because “they were all too small”. Furthermore, he adds: “sometimes you can see Midrar trying to exhale and inhale. He lives and wants to live, how can they keep saying that he is dead?”

Therefore, the family does not understand why the NHS doctors are in such a hurry to stop his treatment. Karwan revealed at the hearing that he had been subjected to subtle pressure to stop ventilation, which the hospital has denied. He also reported to the Compass that from Midrar’s first week in hospital the possibility of donating Midrar’s organs was brought up. A situation similar to that which had emerged for Tafida, for whom already in the first days of hospitalisation the doctors had envisaged organ donation, according to the two documents made public by the family even before the case arrived before the High Court.

While awaiting the sentence, Karwan is working hard to find a medical facility willing to receive and treat Midrar. And he explains that he has also contacted “two Italian hospitals”. In the meantime, the family has activated a Facebook page, “Help baby Midrar Ali”, to ask for support in the battle for their son’s life.