Armin Laschet, Angela Merkel's possible successor, has decided to entrust the Turkish-German association Ditib with authoring school textbooks as well as the management of Islamic religious education in schools. Ditib is a veritable Turkish government association. Will new generations of German Muslims place their trust in Erdogan? 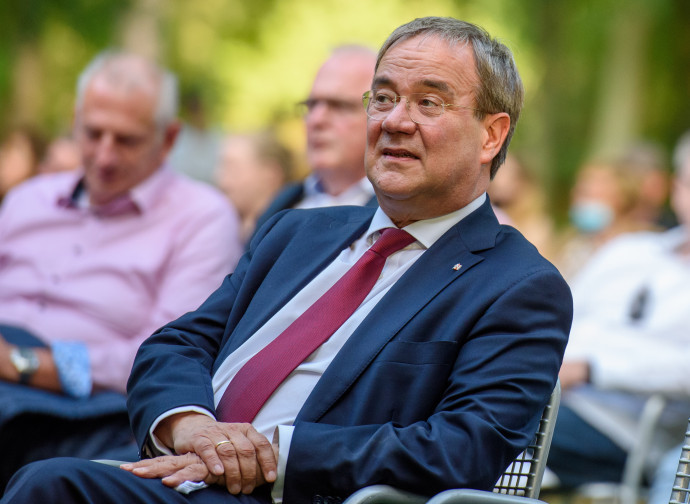 Armin Laschet, better known as 'Armin the Turk', is the favourite to replace Merkel when steps down on 22 September and Germany returns to the polls.

For some days now, his name has been making national headlines. His recent decision to entrust Ditib, the Turkish Islamic association, with the authoring of school textbooks and the management of Islamic religious instruction in the country has created quite a polemic. Only a few days ago there was discussion about the decision of a wing of the German Parliament to put a stop to Islamic advances in the country; Armin Laschet, governor of North Rhine-Westphalia (NRW) has decided to entrust Erdoğan with the education of Germany youth.

This is something that made even startled the left. Christoph Ploss, Hamburg’s Christian Democratic Union (CDU) regional leader, told  Bild magazine: "I will state it clearly: there will be no cooperation with Ditib."  CDU vice-president Carsten Linnemann said, "We should ensure that the content of school lessons is based on the principles of the German nation. Turkey’s autocratic president Recep Erdoğan is leading his country ever more in an Islamist and anti-Semitic nationalist direction. Until this direction is no longer taken, cooperation with Ditib should be suspended."

Here we are referring to Germany's most populous state and also home to the largest Muslim community: around 3.5 million German Muslims, mostly descendants of Turkish and Arab immigrants. This is a community which has always been showered with great care and been pampered. In January, it was Erdoğan who personally congratulated Armin Laschet after winning the CDU leadership. During the phone call, he promised to cultivate further bonds of friendship since Laschet is doing so much for Turks inside and outside Germany.

The 59-year-old is known to be often a follower of Merkel policies. However, recently, Laschet has surpassed Merket in terms of multiculturalist ambitions. These came about when Laschet was North Rhine-Westphalia's integration minister between 2005 and 2010. These were years in which he became a main point of reference for the Turkish community. Yet the Ditib delegation for teaching in German schools goes far beyond the imagination of even some of Laschet's colleagues. Ditib is one of the largest Islamic associations in Europe. It manages and trains imams of some 900 German mosques that depend directly on Erdoğan’s government.  In fact, these imams are considered state officials for Turkey. In recent years, especially after the failed 2016 coup, Ditib has also been given espionage missions for the Turkish state. It was in 2017 when magistrates opened an investigation against the association that hunted down political enemies of the would-be sultan, but little evidence was found.

Better known as "Armin the Turk", Laschet is trying to clear himself of his detractors' accusations by claiming that the new education committee he just appointed will have no say in compulsory classes, but only in those where Islamic studies classes are optional. Is this supposed to be a discriminating factor? North Rhine-Westphalia is one of nine of the total 16 German states that permits pupils to take these optional courses, which are not limited to a trivial hour of Islamic religion, but are real courses also in Islamic history, doctrine and which aim to educate Muslims to fit into the life of a state that does not yet enjoy the principles of  sacred Islamic shariah law.

Ditib was founded in Ankara in 1984 as a branch of the Turkish Department for Religious Affairs called the Diyanet. Established in 1924, after the abolition of the Ottoman Caliphate, by the then-Kemalist government as a continuation of Sheikh ul-Islam (the authority once charge of religious affairs of Muslims during the Ottoman Empire), the Diyanet's main objective is to keep Islam and its people under state control through religious formation. Since the Department of Religious Affairs was created, state-financed mosques have been built. What is more, mufti, muezzin and imams have also been hired by the government which has taken care and continues to take care of their formation, all this with  salaries paid by German taxpayers regardless of their religious beliefs. Moreover, Friday sermons delivered by the imams in all Turkish mosques and in all other European nations are written ny Diyanet officials wherever their offices exist.

Entrusting the Ditib with the writing of German children's textbooks means entrusting new generations to Recep Erdoğan’s government. Moreover, it should not be overlooked that the Diyanet is not only answerable to the government, but also to the National Intelligence Organisation (MIT, Millî İstihbarat Teşkilatı), to which it passes on information it gathers on political opponents operating abroad. This means that it can be considered a body that is something in between an instrumentum regni and a secret service agency. The Diyanet - having an unlimited budget and roughly 150,000 employees serving in various capacities - has a massive sphere of influence. It is an institution larger than most government ministries. Under the current Turkish Islamist government, its powers continue to grow by leaps and bounds. Today, Turkish government authorities can determine, through the power of the Diyanet, where new mosques will be constructed, what their architecture and size will be, and so forth. The Diyanet, furthermore, detests Israel. In fact, its chairman Ali Erbas has dubbed it a 'terrorist state' and perceives Jerusalem as an “Islamic city.”  It is the department that has the most control over groups persecuting Christians, Jews and Yazidis. In Europe, it has already taken root in France, Belgium, Denmark, the Netherlands, the Balkans and Germany where it has its most powerful base.

Laschet's proposal comes in synergy with his education minister, Yvonne Gebauer, who just announced the revival of an hour-long Islamic class in schools. In 2012, when the country first began to accommodate the demands of the Islamic community, 1800 pupils enrolled in the course. In 2019, this figure jumped to 22,000. These figures are only for North Rhine-Westphalia. As of tomorrow, it may no longer be laypeople chosen by the state and trained in Islamic history who teach the course, but rather imams or others chosen directly by Diyanet officials. There are more than 900 schools across Germany offering Islamic religious instruction. In Hesse, since 2019, middle school children can take the subject "Islamic lessons", which is sponsored directly by the state and quickly becoming a model project for all of Germany. Islamic lessons in schools exist in practically all regions, except in the five eastern federal states.

According to a Mediendienstes study, in May 2020 there were already 60,000 German primary and secondary school students who had chosen to take the Islamic hour class. During the 2018/19 school year, there were almost 56,000 students; two years ago there were virtually 55,000  children who had taken the course. Since 2017/18, 35 schools have been added nationwide offering Islamic religious studies. The German state that holds the record is still North Rhine-Westphalia and, thus, Laschet's decision is not surprising. But there are some 364,000 Muslim students there, so there is still a lot of catching up to do.

Just look at the Turkey’s AKP government which is the natural result of decades of repression or forced assimilation of non-Muslims and non-Turks, as well as the institutionalisation and indoctrination of Sunni Muslims through public institutions and education. Is this the fate Germany has chosen for itself?