“May Day” for the United States: The First 100 Days of Biden and Harris

The first 100 days of the Biden-Harris Administration brings us close to “May Day.” Appropriately, may day (m’aidez) is the distress call sent out by those facing dire circumstances. The United States today finds itself at a difficult crossroads. This Administration is not only against life but the President does not appear to be in control. Whereas, Vice President, Kamala Harris, stands ready to step in should the occasion warrant. 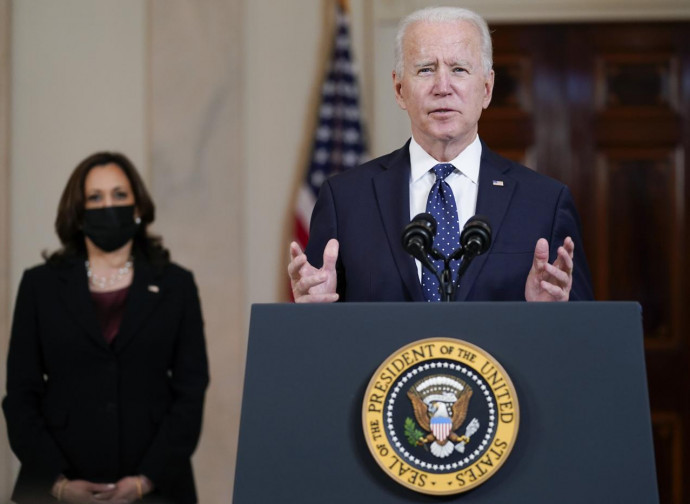 (First part of two) The first 100 days of the Biden-Harris Administration brings us close to “May Day.” Appropriately, may day (m’aidez) is the distress call sent out by those facing dire circumstances. The United States today finds itself at a difficult crossroads with massive undoing of key life-affirming norms and regulations by the new administration thus marking a radical departure from its predecessor.

On January 20, at his inauguration, President Joe Biden made a seemingly impassioned speech calling for national unity.
Two days later, the anniversary of the legalization of abortion by the Roe v. Wade Supreme Court decision, he began a demolition derby to undermine and undo key achievements of his pro-life predecessor, Donald Trump. Biden started by issuing a one-page statement praising Roe v. Wade in which he and Vice President Kamala Harris stated they were “committed to codifying Roe v. Wade” and pledged to appoint judges who respected its content. (The determination to codify Roe v. Wade had previously been presented in the 91-page Democratic Party Platform before the elections.) A few days later, on January 28 a more comprehensive “Memorandum on Protecting Women’s Health at Home and Abroad” extended the reach of reproductive rights to the rest of the world as described below.

These actions were non-starters to promote “national unity.” On the matter of abortion there is no room for compromise. Either one is pro-life or pro-choice.
Biden’s move came only a few days after President Trump, in the closing days of his reign, issued a proclamation on January 17 declaring January 22 as “National Sanctity of Human Life Day” where he named the unborn as “the most vulnerable in our society.”
Biden’s statement was only the first of dozens of proclamations, executive orders. statements, and memoranda signed by the new president thus ruling in an almost imperial fashion. Since day one he has been photographed at his desk in the White House oval office, signing all of the above.

“Hidin’ Biden” ….. Where are all those press conferences?

In the past, American presidents have been eager to appear at press conferences as this gives them maximum exposure and an occasion to explain their plans and policies.
While Biden has been capable of reading from teleprompters, squinting his eyes as he strains to read statements prepared for him, he may no longer be able to handle the customary intense questioning of lengthy press conferences.
The White House press corps eventually exercised enough pressure on presidential press secretary Jen Psaki, who covered for “a very busy” Biden, so that the president finally appeared for his first (and so far only) press conference on March 25. It was unlike any other prior presidential news conference. Biden read from several fact sheets, a spiral notebook, and index cards, as carefully chosen reporters asked soft questions – which the president struggled to answer as he shuffled papers to find the appropriate prepared answers.

As has happened at other public appearances, Biden occasionally did lose his train of thought and at times uttered some surprising remarks such as references to migrants besieging the US southern border having to cross the “Mexican desert” while coming from “Guatemala, Mexico, Guadalupe…”
While the American mainstream press has been unusually deferential to the lapses, gaffes and stumbles of an obviously semi-senescent Biden, the charade will have to stop at some point. To many observers Biden cannot last a full four-year term as President.

“Joey had a little lamb…”

With due apologies to the author of the children’s rhyme, when it comes to public appearances President Biden is usually trailed by Vice President Kamala Harris. When in the oval office signing documents or at various meetings, Harris is usually standing a few steps behind as if she is ready to step in should the occasion warrant. She follows him at every public event in a manner reminiscent of “Mary had a little lamb, etc…”

Harris’ function seems to be not only to accompany him, but also act as a keen observer. Given Biden’s apparent cognitive impairment (which the mainstream press carefully sidesteps), she gives the impression that she is more of a “president-in-waiting” gathering a few pointers before her day arrives.
Slip of the tongue references to the “Harris-Biden administration” during the election campaign and afterwards, perhaps can be considered as a harbinger of things to come. The timing may not necessarily be four years from now. Charades can have a time limit.

The new Vice President also has taken on presidential functions such as personally making the initial contact in meetings with foreign leaders. Harris was the one who greeted the first foreign government leader to visit the White House since Biden arrived, Japanese Prime Minister Yoshihide Sugo. The President and Vice President sat in at the formal meeting that followed.

A word about the last election

The November 2020 elections yielded some strange results that need to be placed in perspective. First, there were a record number of voters. Secondly, no US presidential candidate had ever won – or lost – an election with a record number of votes.
Last November an unprecedented 74.2 million votes went to Donald Trump. However, Joe Biden received 81.3 million votes as well as more electoral college votes by flipping five states – which is the deciding factor in declaring the victor.

Another important element of the Presidential election results is the composition of the voting. Last year more black men and Hispanics voted for Trump than in 2016. This may reflect the significant improvement in their employment status. Just before the pandemic hit, the US unemployment rate was as low as 3.5% in February 2020, the lowest in 50 years. According to the US Department of Labor, the black/African American jobless rate was 6.3% and the Hispanic/Latino rate only 4.8%. In December 2016, at the end of the Obama Administration, the latter two rates were 7.9% and 5.9%, respectively.

In the Senate, the Republicans lost two seats as well as their majority largely due to Trump’s complaints about presidential election results in Georgia which prejudiced the outcome for the two Republican candidates so that two radical Democrats won Senate seats. As a result, the Senate is now split, 50-50. The Democrats claim they have a majority but only because the Vice President can cast the deciding vote whenever legislative voting turns out to be evenly divided.
There is a different story to tell in the House of Representatives. Republicans gained 16 seats last November thus reducing the Democratic majority. Moreover, some of the Republican newcomers are women and pro-life. The Democrats now hold 222 seats and the Republicans 213. In the 2022 elections Republicans need to win five additional seats to regain a majority.