Maira and Huma sequestered in Pakistan. The sad fate of Christian child-brides

In Pakistan, the question of Christian child-brides kidnapped by Islamic men has for some time now caused a series of legal disputes. What has happened in the past few years with the case of Asia Bibi is nothing compared to what Maira Shahbaz and Huma Youmus are presently suffering,who are respectively 14 and 15 years old. Their judicial processes could seriously become a precedent for the Asian country and are confirmation of how much Islamic fundamentalists have been able to manipulate existing laws to their favor 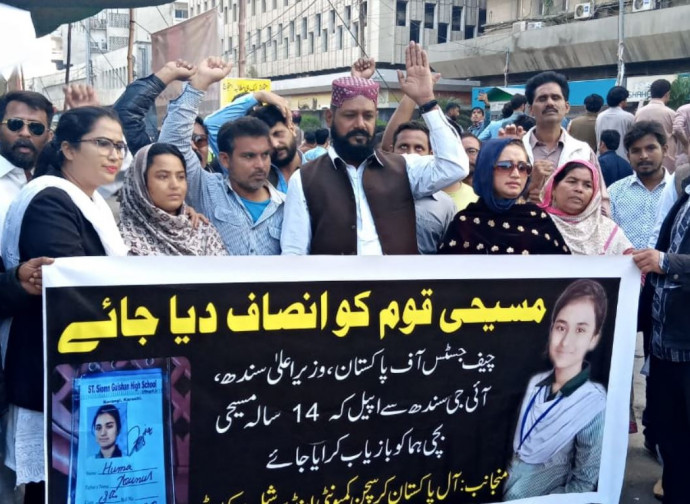 In Pakistan, the question of Christian child-brides kidnapped by Islamic men has for some time now caused a series of legal disputes. What has happened in the past few years with the case of Asia Bibi is nothing compared to what Maira Shahbaz and Huma Youmus are presently suffering,who are respectively 14 and 15 years old. Their judicial processes could seriously become a precedent for the Asian country and are confirmation of how much Islamic fundamentalists have been able to manipulate existing laws to their favor. The conflict between civil laws and sharia law is more than ever open and unresolved, but at the moment it seems that Islamic law is prevailing.

With regard to the Maira Shahbaz case, the sentence given by the High Court of Lahore last Tuesday was a real cold shower for the family of the 14-year-old from Madina Town. According to the court, since Maira converted to Islam, her marriage with Mohamad Nakash would be valid – a verdict that, in the opinion of the young girl’s lawyer, Khalil Tahir Sandhu, would be nothing other than an “Islamic sentence.” Maira’s parents and lawyer are now making an appeal, taking advantage of a current principle of the Pakistani legal system which says that a minor may not convert to another religion without the consent of the parents.

The drama of Maira and her family took place last April 28, when Mohamad Nakash and two armed accomplices broke into the girl’s house, kidnapping her and firing shots in the air as she escaped. Shortly afterwards, her mother was taken to the hospital in a state of shock.”I ask that my daughter be returned to us. I am terrified that I will never see her again,” the woman declared to Aid to the Church in Need shortly after her abduction. The Shahbaz family lives in conditions of extreme poverty, to the point that Maira was forced to leave school early to look for a job.

In the first instance sentence, the tribunal of Faisalabad had agreed with the kidnapper, who had declared that Maira was 19, thus an adult and suitable for marriage. Completely false, since Maira is 14, as proven by her birth certificate and other official documents that allowed the lawyer Tahir Sandhu to appeal. The kidnapper and self-styled husband of Maira thus raised a new quibble: according to Islamic practice, the marriage is valid so long as the bride has already had her first menstrual cycle.

Ten days ago, the Faisalabad court overturned the sentence of the first instance, decreeing that the girl was to be taken away from Mohamad Nakash and restored to a house-family, but without permitting her to resume contact with her parents. The man was thus accused of seizure and falsification of documents.

When the case was examined by the High Court of Lahore, the situation again turned in favor of Nakash, who based his argument on Maira’s conversion to Islam. Now the case awaits the appeal of the Shahbaz family’s lawyer, which, if it gets a negative decision, will appeal to the Supreme Court of Pakistan.

“With this sentence no Christian girl in Pakistan is safe,” commented Lala Robin Daniel, an activist for human rights. And Alessandro Monteduro, Director of the Italian section of Aid to the Church in Need, recalled that the case of Maira Shahbaz is hardly isolated. “Every year 1000 Christian and Hindu girls and women are sequestered in the same way in Pakistan,” Monteduro declared after the first sentence, “to which may be added the total absence of protection by judicial authority, which is often influenced by social pressure.”

The affair of 15-year-old Huma Younus is very similar. She too is Catholic and was seized last October by Abdul Jabbar near Karachi. The girl became pregnant by her kidnapper, who videocalled her parents, showing them the weapons he possessed and, on several occasions, threatening them with death if they tried to recover their daughter. The man also declared himself ready to falsely accuse Younus of blasphemy, following a pattern that is sadly often repeated, as the odyssey of Asia Bibi also testifies. Also in this case, the kidnapper falsified the girl’s documents, passing her off as an adult and attempted to use the principle of the first menstrual cycle as the element of matrimonial validity according to Sharia law.

So far all the sentences have been in favor of the kidnapper. Huma is defended by a Catholic lawyer, Tabassum Yousaf, a lawyer of the High Court of Sindh, who shared that he has been threatened with death for his legal work. “It’s not that I am not afraid for my life, but I consider assisting persecute Christians as a mission and a service offered to God and my Church. And threats won’t stop me,” the lawyer declared to Aid to the Church in Need.