Macron: product of EU and media has won, with the support of Islam

Emmanuel Macron is the second French President to win re-election. For political scientist Alexandre Del Valle, it was the support of the media and big business that counted. Le Pen's failed electoral campaign, which was over "normalised", also took its toll, as did the decisive contribution of the extreme left-wing voters who had voted for Mélenchon in the first round. And the Islamic vote counted, too. But what if Le Pen had won? "It would have been considerably more complicated for her to govern than it was for Trump" 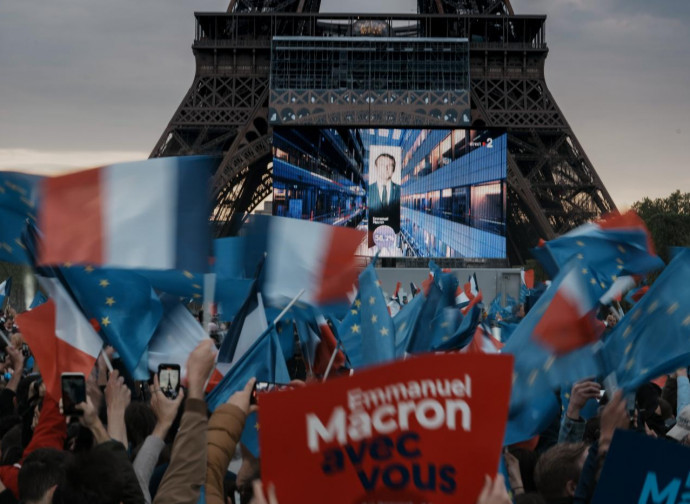 Emmanuel Macron has won the French elections and a second term, something which hasn't happened since Jacques Chirac. Whereas, Marine Le Pen has remained for the international media world, which by now has unchallenged jurisdiction over global consciousness, the youngest daughter of Jean-Marie Le Pen, the daughter of a Holocaust denier, the Islamophobe and populist who "leads an obtuse front against Europe". Still, hers remains a historic result: she took around two million more votes than last time.

The Daily Compass discussed the result with Alexandre Del Valle, political scientist, essayist, journalist, professor, and specialist in geopolitics and the Middle East. La mondialisation dangereuse is one of his latest works.

Would you say the result a foregone conclusion?
Macron is the man of the system. Instead, Mélenchon and Le Pen are the enemies par excellence. The man of Europe, of the multinationals, of industry, has won. The man of the media - and the media today are nothing more than the employees of large industrial groups. It was very difficult to reach a different outcome.

The "champion" of the extreme left, Jean-Luc Mélenchon, has given (without saying so explicitly) his endorsement to the "president of the rich", as he has called Macron for five years. Does this mean that Macron's opponents have not been able to challenge him, to call on the French people to take back what high finance, the "system", has taken from them?
The man from the radical left has simply been working on strategy: his goal is to become the prime minister of a cohabitation government.

How?
De Gaulle's Constitution is the most presidentialist in the democratic world. It gives the president even more power than his counterpart in the US. But when it happens that the majority of the government is not only an expression of the president, then there is French-style cohabitation: the sharing of excessive power giving much more leeway to the prime minister.

Enter Mélenchon.
Exactly. His is a subtle strategy. He said to himself: "I won't stand in Macron's way, I'd rather put a brake on votes for Le Pen. He will have to thank me in some way". Mélenchon knows that a part of his voters is not Trotskyist, but simply against the current “system”. This is why so many, even if they are rather left-wing, would vote for Le Pen. And the programme of the new Le Pen is a very proletarian, almost anti-capitalist programme.

In what sense?
The French socialists are woke, like Trudeau in Canada. They are based on a hyper-globalist mentality, on the side of transsexualism and homosexualism: at the antipodes of the Muslims. But the latter feel defended, paradoxically. Because, with the likes of Mélenchon, it is easier to open new mosques and break immigration rules. And this has created, without formal agreements, enormous support, from the Muslim Brotherhood to the socialist party. Hollande against Sarkozy, on the other hand, needed a pact.

Sarkozy also made a deal with the Muslim Brotherhood.
He created the French Council of Islam and put the Brotherhood at the head of it. He made a state deal. Yet they voted against him.

Why?
They understood that immigration would be hindered. Radical Islamists vote pragmatically. Better a leftist who roots for trans people than a reactionary Catholic. The calculation is not on ideology, but on who does not obstruct their expansionist strategy: their goal is the conquest of the West.

The great mosque of Paris with its Algerian rector supported Macron. Were the Algerians strong enough to change the outcome?
Algeria has every interest in using its community as a Trojan horse in French politics. Algerian immigration has been massive and today they are a minority that can easily be a fifth column, with ample capacity for interference.

Even in the last debate Macron didn’t even make an effort to appear less arrogant and aggressive. A total lack of empathy with the French people was evident. Does he feel his back is covered by the globalist elites?
They see him as the saviour of the European project. He doesn't have such a huge charisma like Sarkozy - only those who have heard him can understand what I'm talking about - but he is capable of catalysing the affection of young people by being a wokist, a French Trudeau. For Macron, the miniskirt, the veiled woman, and the transvestite are the same: he embodies the official ideology of the West; he doesn’t swim against the tide.

Throughout the election campaign, Islamic terrorism seemed no longer to be a problem, yet it used to be Le Pen's battle horse. So is this danger averted in France?
Marine has become a political professional. She has understood that for the average Frenchman, today, the enemy that the media let you perceive is the blond Russian, tsarist, fascist, Soviet, not the Islamist who places bombs.

Does the average French citizen no longer feel the danger of Islamism?
They are terrified of the banlieues and Islam in general. They are afraid of the civil war that could really happen between Muslims and non-Muslims, and so they hope that with a little multiculturalism like in Belgium, there will be no more problems of terrorism.

Is that why Le Pen didn't touch on the subject too much?
Marine has understood perfectly well that there is a more urgent, tangible fear: hunger. Wheat and petrol, along with purchasing power, are the new priorities that throw the Islam problem far into the distance, especially if you don't live in an Islamised neighbourhood. Even if Macron is completely on board with sanctions.

What would have happened if Le Pen had won?
It would have been much more complicated to govern than it was for Trump. She would have had the whole system against her, from the media to the European Commission. Just look at Orbán. The same week that he opposed sanctions against Russia and agreed to pay for gas in roubles, a mechanism took over to block Hungarian European funds. Just by chance. Marine would have been persecuted by the system in place.