LGBTQ lobby has already triumphed at the Synod

The wrestling match over a link to an American LGBTQ organisation on the Synod website - put, removed, put back - reveals just how influential the gay lobby is today at the top of the Church. It amounts to the official recognition of a group disavowed by the American bishops, condemned by the Congregation for the Doctrine of the Faith 22 years ago, but now promoted by Pope Francis. 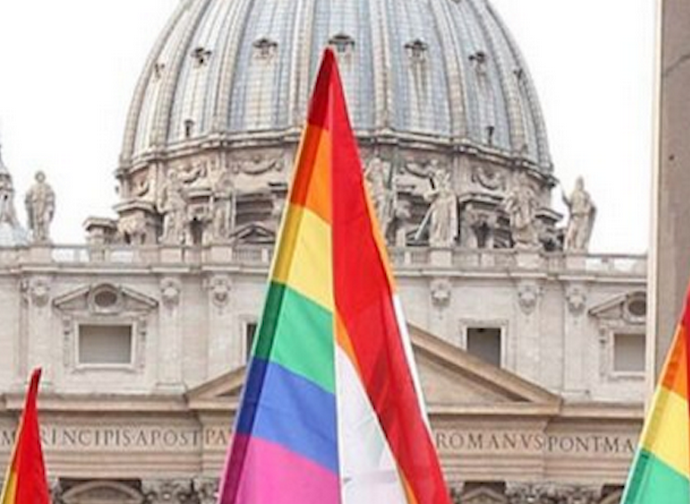 A link is worth more than a hundred theological and magisterial documents. This is the lesson that was taught recently by the Synod on Synodality, for which the preparatory way began last 9 October. The link refers to a webinar by New Ways Ministry, an American organization of LGBTQ Catholics, which is posted on the resources page of the Synod's website. Indeed: it was there, then it wasn’t and now it is again; a real marketing ploy.

The fact is, it was there but no one had noticed it (apparently few visit the official site of the Synod) until on December 6, when the ubiquitous Father James Martin, the greatest sponsor of the LGBTQ agenda in the Church, drew everyone’s attention to it with a tweet: the webinar on the Synod website is "a small, but historic step forward in the Church's relations with LGBTQ people," he wrote. Obviously there is no mention of the webinar’s contents - a very long, exhausting dissertation by the "theologian" Robert Choiniere on the theme of the Synod and on the Synodal Church and on the contribution that LGBTQ groups can offer - meaning the achievement lies in the fact there is an LGBTQ organisation present on the Synod website.

And not just any for that matter: New Ways Ministry, founded in 1977 by Sister Jeannine Gramick and Father Robert Nugent, was repeatedly denied recognition as a Catholic organisation, the last time in 2010 by the then president of the US Bishops' Conference Francis George. And previously it was Cardinal Joseph Ratzinger, as prefect of the Congregation for the Doctrine of the Faith, who "permanently" forbade the two religious "any pastoral activity involving homosexuals". The Notification of May 31, 1999, signed by Ratzinger with the full approval of Pope John Paul II, is interesting in order to understand what the core of the problem is and what the nature and purpose of New Ways Ministry is.

In fact, the document gives an account of the long, fruitless dialogue promoted by the Holy See with Sister Gramick and Father Nugent to bring them back to Orthodox positions. To no avail, the two religious rejected the Church's teaching on homosexuality, the recognition that homosexual acts are intrinsically evil and that homosexual inclination represents an objective disorder. It was clear from the outset that the true purpose of New Ways Ministry was - and is - to change the Church's doctrine on homosexuality. Just like the organisation Catholics for a Free Choice (now Catholics for Choice), founded in 1973 and also based in Washington, on the abortion and contraception front. It is also clear that the then Cardinal Ratzinger was referring to New Ways Ministry when in 1986 he denounced a powerful gay lobby within the Church, but with "close ties with those who act outside of it", which wants to "subvert" the teaching of the Church itself.

So it’s easy to understand why someone alarmed by Father Martin's tweet led on 7 December, to the link disappearing from the Synod's website. And at that point Francis DeBernardo, executive director of New Ways Ministry, decided to play his trump card: the two letters Pope Francis himself had sent to DeBernardo, one last May and the other in June: one expressing his appreciation of New Ways Ministry’s suffered history, the other expressing great participation in the pastoral work of the LGBTQ group and exalting the figure of Sister Jeannine Gramick ("a woman of worth who makes her decisions in prayer").

One can only imagine the turmoil this revelation brought to the headquarters of the Synod Secretariat. And in fact, after just a few days, Sunday 12 December, the head of Communication of the Synod Secretariat, Thierry Bonaventura, immolated himself "on the altar of hypocrisy" (Pope Francis would say) and wrote a letter of apology to the LGBTQ community, assuming all responsibility for the removal of the link due to unspecified "reasons for internal procedures".

Bonaventura, in a style reminiscent of the self-criticism sessions at the time of the Chinese Cultural Revolution, acknowledges that by so doing he "caused pain to the entire LGBTQ community". "I feel that I must apologise - continues the letter - to all LGBTQ people and to the members of New Ways Ministry for the pain caused, testifying with the two contributions below the firm will - not only mine but of the entire General Secretariat of the Synod - not to exclude those who wish to carry out this synodal process with a sincere heart and a spirit of dialogue and real discernment ". He continues with an invitation to LGBTQ groups to send their contributions to the Synod through a preferential route, a direct email address. And obviously the link to the webinar was immediately relocated to the resources of the Synod website.

The next day, with great magnanimity, Francis DeBernardo officially announced his forgiveness of poor Thierry Bonaventura: "These unprecedented apologies from a Vatican department - writes DeBernardo - correct the mistake made and amplify, even more strongly, the welcome that Pope Francis has extended to LGBTQ people ».

Any comment, at this point, seems superfluous, the facts speak for themselves. This going back and forth over a simple link has resulted in the Holy See officially recognising a group whose purpose is not the pastoral care of homosexuals (which the Church has never denied) but to promote the LGBTQ agenda within the Church by subverting its teaching. A true masterpiece of marketing, it is the triumph of the LGBTQ lobby in the Church. And we begin to understand better what’s the purpose of a Synod on synodality.