She is often seen today at the side of Warsaw’s Mayor Rafał Trzaskowski, a candidate of the left running for president of Poland. Her association, Pro Humanum, which promotes LGBT ideology, has received almost two million złoty in support from the City of Warsaw. Her name is Jolanta Lange, but it was recently discovered that her true surname is Gontarczyk. She is a former communist spy who, together with her husband, betrayed the trust of Father Franciszek Blachnicki (†1987), who died in forced exile in very strange circumstances and who was persecuted throughout his life first by the Nazi and then by the Soviet totalitarianisms. Today an investigation seeks to shed light on his death and on the role played by Gontarczyk, who was the last one to see him alive. 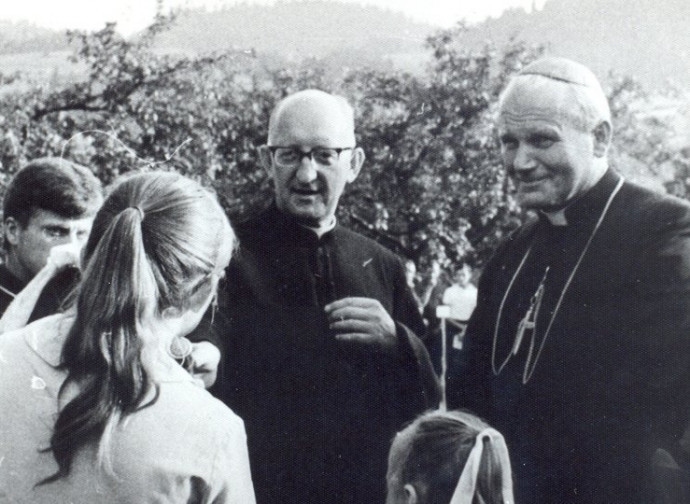 A recent photo shows the Mayor of Warsaw, Rafał Trzaskowski (currently a candidate of the anti-clerical and libertine left for the presidency of Poland) together with Jolanta Lange of the Pro Humanum association prior to the press conference on the 5th World Day of Diversity in Warsaw. Lange, who promotes LGBT ideology, has received almost two million złoty (about half a million euro) from the City of Warsaw for her cause.

Recently, however, it was discovered that the real surname of the promoter of “equality and diversity” is Gontarczyk, and that in the past this woman was a collaborator of the communist security services operating in West Germany. Together with her husband she was responsible for the surveillance of Father Franciszek Blachnicki, a Polish priest and founder of the “Light-Life” Movement, who was in exile in Germany because of his pastoral activity. The Gontarczyk’s were the last people to see Father Blachnicki before his sudden and mysterious death. The investigation of the involvement of this LGBT activist and former spy of the communist regime in the death of Franciszek Blachnicki, who has been declared Venerable by the Church, was recently taken up by the [Polish] National Memory Institute.

Victim of the Nazis

John Paul II often repeated that he had experienced two totalitarianisms: nazism and communism. Like him, many Polish priests born at the beginning of the 20th century suffered personal experiences of the hostility of these totalitarianisms toward religion and the Church. Among them was a charismatic figure of the Polish Church during the time of the communist regime: Father Blachnicki.

Franciszek was born in Rybnik, in Silesia, in 1921. When the German armies invaded Poland in 1939, igniting the Second World War, he participated in the defense of his country, but on September 20, 1939, he was taken prisoner. Fortunately he succeeded in escaping and he began working in the Polish underground. Unfortunately, on April 27, 1940, he was arrested by the Gestapo and taken to the German concentration camp at Oswiecim (Auschwitz) and given the number 1201. He remained there for 14 months, including about one month in the same starvation bunker where Father Maximilian Kolbe died.

In September 1941 he was taken to Silesia, where he was detained in interrogation prisons. On March 30, 1942, prisoner Blachnicki, who was barely 21, was condemned to death for his underground activities against the Third Reich. But after about five months on death row, he was pardoned. The death penalty was commuted to ten years in prison camps (the reprieve given to this young anti-fascist priest was the only known case in which the Nazis did not carry out the death penalty). During the following years, he was imprisoned in various Nazi camps and German prisons (Racibórz, Rawicz, Börgermoor, Zwickau and Lengenfeld) until April 17, 1945, when he was liberated by the American army.

The priest under communism

The war years and the hell of the Nazi prisons and camps, led to the maturation of a vocation to the priesthood in this young man. Consequently, as soon as he returned to Poland, on August 6, 1945, he entered the Silesian Seminary in Krakow. On June 25, 1950, he was ordained a priest by Bishop Stanisław Adamski, and he began to work in various parishes in the Diocese of Katowice. In 1957 he organized a social initiative against the plague of alcoholism called “The Abstinence Crusade.” About 1000 Catholic priests and over 100,000 lay people were involved in this initiative. At the time, the authorities tolerated alcoholism because it allowed them to more easily manipulate the population; hence in 1960 the “Crusade” was prohibited. In response, Father Blachnicki wrote a memorandum sent to both the civil and ecclesiastical authorities, criticizing the persecution of the Catholic Church in Poland and arguing that by impeding the “Crusade” the state was placing itself in opposition to the good of the people. As a consequence of taking this position, in March 1961 Father Franciszek was arrested on the charge of “spreading false news about the supposed persecution of the Church in Poland.”

He spent over four months in the Katowice prison (by a cruel coincidence, it was the same prison where he had been held by the Germans during the Nazi occupation). He was condemned to 13 months in prison and suspended for three years. There is an anecdote connected to Father Franciszek imprisonment. The priest shared his cell with another man who told him that he has ended up in prison because of vodka. Father Blachnicki replied to him with a smile, “I too, my son, ended up here because of vodka!”

Pioneer of the lay movements

In the difficult times of the Soviet regime, Father Blachnicki sought new forms of pastoral activity, particularly with the youth who were subjected to continuous communist propaganda. In 1954 he organized a 15-day retreat for the first time that he called “Oasis of the Children of God,” to teach young people how to live a really Christian life. In 1969, he added the idea of the “Living Church” to the Oasis experience. In 1976 the Oasis of “Living Church” gave life to the Catholic movement “Light-Life” (Światło-Życie). Beginning in the 1960s the work of Father Blachnicki became known, appreciated, and promoted by Cardinal Karol Wojtyła. The work of Father Blachnicki played an important role in preserving at least a part of Polish youth from the influence of communist ideology that was imposed on the nation by the regime: about two million young people participated in the activities of the Oasis who subseqently played a leading role in the Solidarność free union. And precisely because pastoral activity with youth broke the communist monopoly on the education of new generations, Father Blachnicki was perceived as a dangerous enemy of the system.

Together with Father Luigi Giussani, the founder of the Communion and Liberation movement, Father Blachnicki organized a gathering in Rome from September 23-27, 1981, with the representatives of 22 ecclesial movements, in order to deepen the relationship between the ecclesiastical institution and the charisms. Thanks to the success of this initiative desired by Father Blachnicki, this first world meeting of the movements with John Paul II was followed by other congresses in 1998 and 2006. It should also be said that the Oasis movement was the stimulus and example for John Paul II that led to the organization of the World Youth Days.

The mysterious death: At the hand of the communist services?

On December 13, 1981, while Father Blachnicki was in Rome, General Jaruzelski imposed martial law on Poland. The priest could not return to his homeland, where a warrant for his arrest awaited him. He thus decided to go to the “Marianum” Polish center in Carlsberg, West Germany. It was thus in Carlsberg that the international “Light-Life” evangelization center was founded, animated by Father Blachnicki. Father Franciszek also founded the Christian Service of the Liberation of Nations for the peoples of Eastern Europe struggling for liberation from the communist regimes. He died suddenly in Carlsberg on February 27, 1987, in very strange circumstances, although officially his cause of death was said to be a pulmonary embolism.

It was only at the beginning of the third millennium that extensive investigations were made to attempt to discover the cause of Father Blachnicki’s death. The investigations, conducted by the National Memory Institute from 2001-2005, demonstrated that Father Franciszek was under strict surveillance by communist security forces who used his two closest collaborators, the married couple Jolanta and Andrzej Gontarczyk, as spies.

The couple not only spied on the priest but also did everything they could to sabotage his work. For example, the “Maximilianum” publishing house founded by Father Blachnicki went bankrupt. It was only in February 1987 that Father Franciszek learned from a representative of the “Solidarność walcząca” (Fighting Solidarity) union who the Gontarczyk’s, whom he believed to be his trusted collaborators, really were.

On the day of his death, February 27, 1987, Father Blachnicki had a heated conversation with Jolanta Gontarczyk, and he may have been poisoned. At that time, there was not enough evidence to proceed with the investigation into the homicide. However, the doubts have never been dispelled. Recently, on April 21, 2020, the investigative division of the National Memory Institute in Katowice decided to reopen the investigation regarding the circumstances of the death of Father Blachnicki, which was suspended in 2006. As the director of the Institute, Andrzej Sznajder, has said “in reopening the investigation in April of this year, the public ministers have decided that a procedural verification of the relevant recently learned data was necessary, since this data was not known when the decision was made to suspend the process.”

The purpose of the process is clear: to verify whether Jolanta Lange of the Pro Humanum association – a “pro-diversity” and “pro-LGBT” activist, who was known as Jolanta Gontarczyk up until 2008 – was “only” a dangerous spy of the communist regime who operated against Father Blachnicki, or if she also played a role in his death.

The cause for Father Franciszek Blachnicki’s beatification has already been opened. On September 30, 2015, Pope Francis, receiving Cardinal Angelo Amato, then-Prefect of the Congregation for the Causes of Saints, authorized the Congregation to promulgate, among others, the decree regarding the heroic virtue of the Servant of God Franciszek Blachnicki, who thus became Venerable. In order to beatify the founder of Light-Life, a miracle occurring through his intercession must be recognized.