Letter on Consecrated Life, as ideological as Fratelli Tutti

A recent letter issued from the Congregation for Consecrated Life overturns the aim that guides virginal and religious consecration: the search for God. Instead, the document proposes the ideology of a horizontal brotherhood, where Jesus Christ is seen as an “optional” or, at best, a useful means in the wake of the encyclical "Fratelli Tutti" (Brothers All ), which is often cited and proposed as a model. 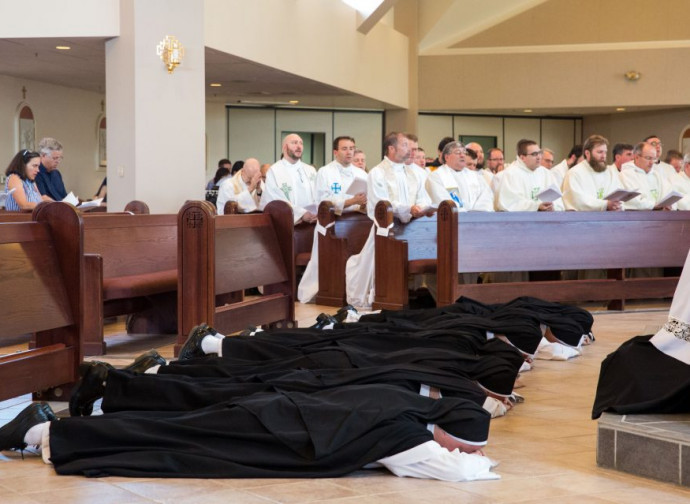 Once upon a time it was exciting to read about mountains in magazines or watch documentaries about them: the beauty of their landscapes, the wonder of their wildlife and vegetation, and even about adventurous  mountaineering stories. Then environmentalist ideology came along and all we read about now is related to carbon emissions, plastics, global warming, and so forth. The sheer beauty, purity and joy of mountain life has now fallen prey to other considerations: glaciers, peaks, valleys, streams, but which no longer sound their natural hymns of beauty. Whether these considerations are right or wrong matters very little: indeed, interest in mountains has taken a utilitarian and ideological turn and their enchantment has worn thin.

Religious life in the Church is akin to the world of mountains: it serves no profit motive, cannot be bent to serve ideologies, even the most noble ones, and it has no practical purpose. Religious life is solely concerned about  searching for God who makes Himself known and then retreats so as to be sought with even greater dedication and utmost zeal. The solitude, rugged terrain, the harsh climate, all increase as this search drives religious life further away from our populated centres of civilisation. This accounts for its allure and protects it from prying eyes as well as variety of abuse.

A recent letter issued by the Congregation for Consecrated Life, however, goes in the opposite direction. It reveals, if there were ever any need to do so, the total detachment of its authors have from the intimate reality of virginal and religious consecration. There is only one thing that matters in the monastic and religious life and which according to St. Benedict, must be continually tested during the time of novitiate: whether or not novices truly are searching for God (RB 58: 6). This is the only reason for joining consecrated life, and it must always be restored and ever kept at the centre of such a vocation, especially when spiritual darkness may dangerously push religious to seek out tempting alternatives.

In the letter such insidiousness becomes reality, with the irritating fact that it is not, as has often happened in history, the consecrated life’s means or good fruits that have displaced its core focus (contemplation, asceticism, praying the Divine Office, apostolic work), but rather the corrupt (and anti-Christian)  ideology of a horizontal brotherhood, where Christ is essentially an optional or, at best, a useful means.

This is the ideology at work in the encyclical Fratelli Tutti (Brothers All) which by no coincidence is repeatedly cited in the Congregation’s letter: "In the Encyclical Fratelli Tutti Pope Francis invites us to act together, to bring about a rebirth in everyone 'a universal aspiration to fraternity' (n. 8), to dream together (n. 9) so that 'in the face of present-day attempts to eliminate or ignore others, we may prove capable or responding with a new vision of fraternity and social friendship...'" (n. 6). In this vague language it appears that a sinister Masonic fraternity is sought, regardless of our adherence to "one Lord, one faith, one baptism" (Eph. 4: 5) and "one faith, one baptism" (Eph. 4: 6). and detaching the "one God the Father of all" (Eph 4:6), which no one has ever seen, from the One who alone has revealed His presence, that is, Jesus Christ (cf. Jn 1:18; 5:37; 6:46).

João Braz de Aviz and José Rodríguez Carballo's appeal to consecrated religious points precisely in this direction: "We ask all of you to place this Encyclical at the centre of your life, formation and mission. We cannot disregard this truth anymore: we are all brothers and sisters as, in fact, we pray, not necessarily conscious of it, in the Our Father, that 'Without an openness to the Father of all, there can be no solid and stable reasons for an appeal to fraternity' (n. 272)." Not the Gospel, not one's own Rules, but the encyclical becomes the new centre of consecrated life. The following clarification then indicates, so as to avoid any misunderstanding, that it is not a question of revealing the face of the one true God and that the "Our Father" evoked is not our own because He is the "Father of our Lord Jesus Christ" (Eph 1:3): "Brothers and sisters, towards all, regardless of faith, cultures and traditions, because the future is not "monochrome" (FT, n. 100) and the world is like a polyhedron that lets its beauty to shine through its different faces".

Consecrated life is clearly no longer interested in seeking the "monochrome" face of God in Jesus Christ, but in contemplating the multiple faces of the world. This is a complete reversal to be achieved with the usual strategy of opening up “processes to accompanying, transforming and creating; of developing projects to promote a culture of encounter and dialogue between different peoples and generations."

Religious communities unite precisely because they desire to converge around a single focal point to which they are drawn and which is at the origin of the very meaning of existence. Fraternity makes sense because we support and count on each other, because  we encourage one another and are aware being common links in the same chain pulling us to a single summit. The summit is the Bridegroom who has called and made it impossible for His bride to desire anything other than to encounter and be in union with her Spouse again: vox Dilecti dilectae. This is far removed from any ordinary beauty of the world and its various manifestations!

Fraternal life is thus subverted and corrupted. It is seen as the glimpse of a "dream" that has nothing to do with God's dream: the dream of reuniting everything in Christ. On the contrary, the Congregation’s letter exhorts religious to dream "as a single human family, as fellow travellers sharing the same flesh, as children of the same earth which is our common home, each with the richness of his and her beliefs or convictions, each of us with his or her own voice, brothers and sisters all!" (FT No 8). The same flesh and the same earth have become the new foundation of a 'humanitarian religion', as each remains true to his own beliefs and convictions. Long live all brothers and sisters, obviously we who are made of flesh and dwell upon this same earth.