Let's cry for Argentina. One default after another, a lesson for populists

Argentina has run the risk of its ninth default, which was avoided at the last minute only by an agreement with creditors. There remains the grave problem of the credibility and holding of public accounts. It is a lesson for Italy: we are not all that different. The Daily Compass speaks with economist Michele Boldrin 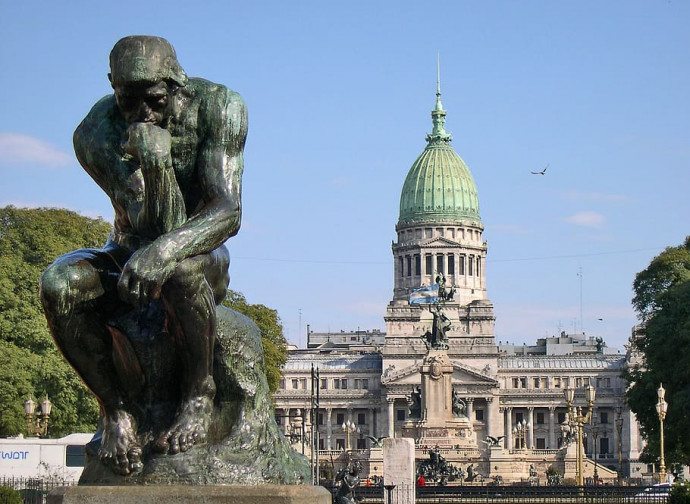 It would have been the ninth default of the history of the republic, but the government of Buenos Aires seems to have avoided it in the Cesarini zone, announcing the signing of an agreement with its creditors. The worst scenario seems to have been avoided thanks to the mediation of FMI and the availability of holders of securities: the umpteenth regional bankruptcy, in fact, would have had grave consequences on the entire regional economy, especially in a moment of unprecedented international crisis. For its part, during the grueling negotiations, the administration of President Alberto Fernàndez did not omit playing the propaganda rhetoric card of popular consensus. The Minister of the Economy Martin Guzman, an economist considered to have heterodox views, had branded his counterparts at the negotiating table with the slightly unflattering name “wolves of Wall Street.” After former President Mauricio Macri’s liberal parenthesis failed, the Casa Rosada returned into the hands of the Peronists, who are notoriously advocates of welfare and dirigisme policies. But Argentina, with almost nine defaults, is only the tip of the iceberg of a systemic condition of Latin America where the populist political culture has made the accumulation of public debt become an inseparable “traveling companion” for the majority of the national budgets of the region. What toll is all this taking on the real economy, past, present, and future? We asked this of Michele Boldrin, professor at Washington University in Saint Louis and one of the most well-known economists in Italy.

President Fernandez is celebrating after reaching an agreement with foreign creditors for debt restructuring. Is this optimism justified?

The real conditions of the Argentine people do not seem to me to be excellent: the economy is imploding. The creditors’ acceptance of the agreement is mainly due to the fact that the national finance is so bad that they fear the possibility of collecting zero. On the other hand, restructuring is a problem of credibility on the one hand and of a “hard game” on the other, because the country that goes into default can always decide not to pay you at all. Clearly if you pay zero, no one is willing to lend you anything any more, but if you have the fund ready to intervene, your bargaining power becomes strong.

In fact the mediation of the IMF was fundamental for the success of the negotiations. What is the reason for this line held by the organization directed by Kristalina Gheorghieva?

For some years now, the political orientation of the Fund – as of a whole series of international agencies – became very populist. The IMF can choose to make political mistakes, and then we will see what the conseqences are. Unfortunately this organization is no longer of any use, and I believe that it could even close: internally it lacks any evaluation criteria in terms of  the quality of the work, and everything is reduced to political dynamics. Its attitude of economic populism, which began at the time of the Greek crisis, continues, and the Argentine affair is the proof.

The country came one step away from the ninth default of its republican history, the third one in the last twenty years. Am I wrong, or is this becoming an established and almost acceptable scheme?

There is an entire literature beginning with Obstfeld and Rogoff on the countries with sovereign debt in foreign currency that declare partial and incomplete defaults and then begin to fail again. It is a complicated trick in which several different variables are at work: debt of this type always tends to yield more and the risk of default is already incorporated. So, if I am an investor who throws himself into such transactions, it is not certain that I have not calculated it. If it goes wrong there is also the loss of 40-50% of capital, so I have already registered my earnings. Then, when the situation settles, I do another round. For its part, the country that seeks default can leverage the threat of saying in the negotiations: “I am paying you zero.” In the end, whoever puts the money into it looks at the substance: in this latest Argentine case, if the creditors accepted the ageement with the government it is agreed to with respect to the obvious reason that they could have taken less. This is the underlying mechanism. But there is another problem.

The problem is one of credibility. What counts, in the end is the action of the agencies. And many multianationals have already announced their flight from Argentina. If the agencies leave, it means you are not credible, as happens in African countries. The government had a dispute with the creditors which, perhaps, it resolved and not without cost. The end. Meanwhile, the recession continues, businesses close, and the people leave. It is not like after the agreement has been reached there will be the distribution of loaves and fishes: tomorrow at Argentines’ tables there will be the same old gnocchi as yesterday.

Minister of the Economy Guzman is presenting the restructuration of the debt like a victory for the government...

It is not a victory. The nation has been in an income crisis for more than two and a half years, and the restructuring of the debt certainly does not mean that now Argentina will happily return to the international markets. It is one thing to receive loans from one or more international institutions, and another to become – let alone become again – attractive to the markets. It is very funny to see how for a country structurally prone to the abuse of public finance it’s enough to do a little public penance in order to be granted further credit. Then, cyclically, after a brief period in which it seems to have become virtuous, it begins to “unravel” and fall into error. Macri himself made a serious one: inheriting a very precarious situation from Kirchner, he was convinced that to avoid disaster it would be enough to focus on a kind of soft landing policy. And he was wrong.

Do you see similarities between the Argentine situation and the Italian one?

Argentina is the more extreme version of Italy. It has less inhabitants and it is geographically bigger, but everything else is the same: exagerrated public spending, an excessively large government, horrendous public social services, a bad school system, the tendency to make bonuses, very high tax evasion, and the emigration of the best young people. The only difference is that while the Italian economic sector is held up by manufacturing, the Argentine economy is based on the primary. Everything else is the same, but they were more unfortunate.

They are not lucky enough to be inside the euro and thus to be able to borrow in credible national currency. If we did not have the euro we would have to borrow in lire or in foreign currency, as they are forced to do because the national savings are not sufficient to finance the deficit at a reasonable cost. If we did not have the euro and the BCE we would be in the same condition as Argentina. Without the prospect of entering the single currency we would have gone into default in the biennium 1994-96. On the other hand, after the crisis of 1992 it’s not as if things worked out; it can only be said that they calmed down only when it became clear that we [Italy] would be allowed to enter the euro.

Speaking of default, why are debt crises so widespread and frequent in Latin America?

Colonialism left an absolutely bipolar social strcture in Latin America. The urban bourgeois of European origin, driven by a mix of nationalism and personal interests, decided between the first and second post-war periods to live in advanced countries that would permit them to have a standard of living, public services, and welfare comparable to European nations. A constant and generalized feature in Latin America – now shrinking in Chile and Colombia – is that wages in the public sector are much higher than in the private sector. Exactly like in Italy, but in an even more evident way. All this generated a system of debt determined by a parasitic urban sector. In this, Argentina is exemplary: even industrialization is parasitic with respect to agriculture. The rest of the economy operates in both technological and cultural backwardness, produces little income and thus ensures that the only solution is debt. In the Argentine case, then, efficient and productive agriculture was heavily taxed for long periods and this provoked political instability, with military reactions of the bourgeois country folk against excessive taxation. Unfortunately it is a historic prison that continues to perpetuate itself, because the Latin American political-cultural world is in the hands of the same elite of European descent, and the populist ideologies that are enemies of the meritocracy that represents an obstacle to their pseudo-equality have served up as a glue until now. If you keep telling the people that their poverty is not due to backwardness, taxes, and public spending that is too high, but rather to American imperialism and capitalism, this will always be the result.