Nadia Geerts, a Brussels-based philosophy teacher, militant atheist and radical secularist, wrote an article for Marianne magazine, expressing intellectual solidarity with Samuel Paty, a history professor beheaded by Islamists in France for having shown cartoon drawings of Mohammed in his classroom. Now, she is the one under threat. Who will the left stand with? Will a  multicultural Belgium come to her defence? 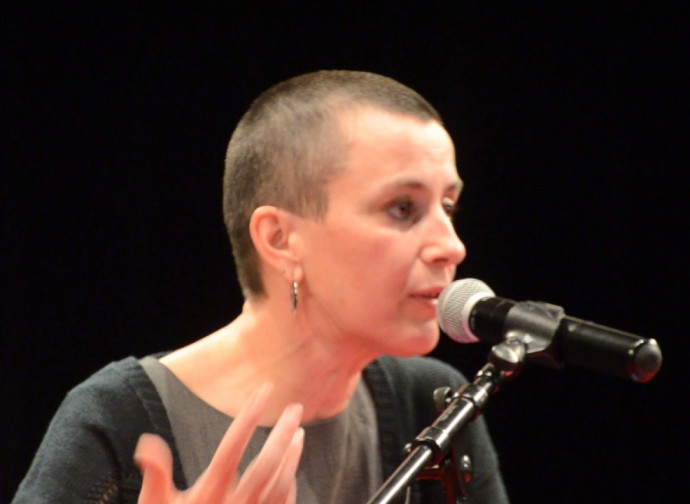 Nadia Geerts lives in Brussels. She is a feminist known for her activism in spheres of anti-racism and secularism. She teaches philosophy at Haute École Bruxelles-Brabant (HE2B) high school. Geerts also writes op-eds for Marianne, the famous French leftist magazine. The day after a professor's beheading, Geerts wrote I am Samuel Paty, a brief homage to a French colleague sacrificed on the altar of Islamism and which brought ridicule upon her name in the square of public opinion.

Very few people indeed shared her stance and desire to preserve the memory of the beheaded teacher. In short, what ensued was a personal Calvary for Nadia Geerts lasting three months. Just a few days ago,  Geerts plucked up the courage to denounce the 90 days of Mila-style persecution she had suffered.  During this time, she was called an Islamophobe, a racist, and soon after that she began receiving death threats.
Her photo appeared everywhere on social networks. Profiles with over 50,000 followers started accusing Geerts of "promoting white privilege" because of her support of the teacher beheaded by Islamists. Her public denunciation of the beheading was intended as a way of show, to some extent, her support of the school where Paty taught, including its administrators. – a  support that, in private, had evidently been a little slow in coming. Thus, on Thursday, the academic board where she teaches – and it is not known for how much longer - decided to issue a note expressing its full solidarity with Geerts. Meanwhile, the Wallonia-Brussels Federation Ministry of Equal Opportunities filed a complaint with  Brussels’ Public Prosecutor's Office, forwarding the threats and insults she had received.

"Now that all this hatred has been unleashed on me, how can I still be sure that my physical and moral integrity is guaranteed, as a teacher and as a citizen?," wrote Geerts, hinting that she will most likely not return to her place of work. Geerts is not naive. She knows the world of communications, and her blog post denouncing her persecution has even reached French readership. And yet, her school has abandoned her. The support she receives is merely symbolic, she says, and it has come months after the fact. No one has ever shared her tribute to Samuel Paty. No one, writes Geerts, has defended her from what she herself has called "excessive influence and interference by pro-Islamic activists both on social networks and in the world of education."

Geerts is a teacher, who until recently fought for the dream of a secular school system in Belgium. She has received awards, being held as a model by the entire educational community. However, she is not happy that from today her high school - as the headmaster has announced - will now support the freedom to wear religious symbols. Geerts is now a victim herself of the secularism that has left a huge void, which has been quickly filled by Islam. She now fears an attack similar to that which cost Samuel Paty his life: "With the return to school and timetable’s made public, every student will know where I am and at what time. And this could be communicated to anyone with bad intentions".

In recent months, the climate of hatred and violence has only intensified, although for Marianne magazine the attacks are all on Geerts simply because she is a feminist. The truth is that we are talking about Belgium, where half of the country's Muslims now live in Brussels. The Islamic population is more than 300,000, roughly 25% of the capital's population. This makes Brussels one of the largest Islamic cities in Europe. In Belgium, the problem of radical Islam originated in the 1960s, when Belgian authorities encouraged mass immigration from Turkey and Morocco as a source of cheap labour. Later, migrants arrived from Egypt and Libya.  Factories then closed, but immigrants nevertheless stayed and settled down in Beligium. Today, most Belgian Muslims are the children of third or fourth generation immigrants.

Before the emergence of the Islamic State, the best known Salafist group in Belgium was Sharia4Belgium, which played an important role in the process of radicalisation of the country's Muslim population. Sharia4Belgium was banned in February 2015, when its leader, Fouad Belkacem, was sentenced to 12 years in prison. Despite being one of the smallest countries in Western Europe, Belgium has become Europe's main source of jihadists now fighting in Syria and Iraq and waging  terrorist attacks throughout the Old Continent. "In 20 years' time", as stated in a 2008 Le Figaro editorial, "Brussels will be Muslim."

There are no recent statistics about the pressures on teachers in Belgian schools as there are in France, where Islam shapes teachers' curricula. But it is easy to imagine, under these circumstances, that the climate in Brussels is not all that different from in Paris. Geerts is, thus, only the latest victim of an anti-racism movement that has become ideological. It is not surprising, then, that only last Tuesday, the mayor of Ollioules, in France's Var region, saw his proposal to rename the high school "Eucalyptus" after "Samuel Paty" get rejected, due to a widespread  lack of enthusiasm. According to the France Bleu website, which conducted an internal poll, 100% of teachers, 89% of parents and 69% of students were opposed to the city's project. Was it the result of an unpleasant memory or because it was too great a risk to their personal safety?