The three siblings of Bethany had a special relationship with Jesus, one of faith but also of conviviality. And Jesus often stopped to eat at their home. Described in the Gospel of John is the thanksgiving dinner for the resurrection of Lazarus. 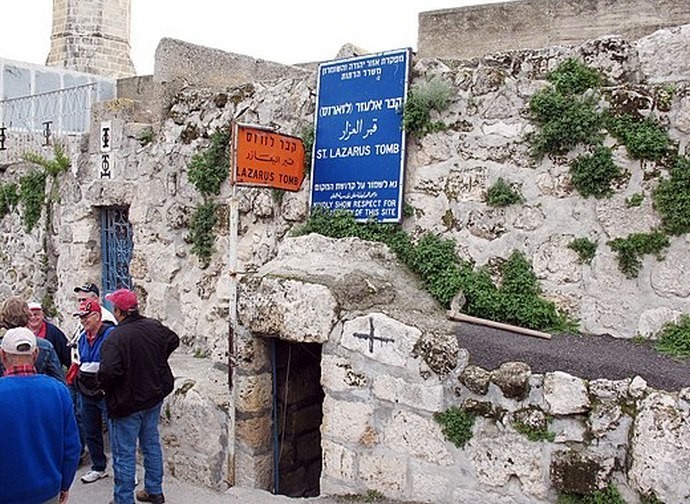 On the olive wood table are pieces of spiced lamb and finely cut chicken meat, chickpea paste, lettuce leaves and some wild herbs, onion rings, lemon slices, olives and pita breads. A carafe of wine stands in the middle and the men pass it around to fill the earthenware goblets.
The young woman serving stops to see if the diners have everything.
The man at the head of the table, with His white robe and His hair loose on His shoulders, speaks in a quiet voice. Everyone listens to Him with respect. 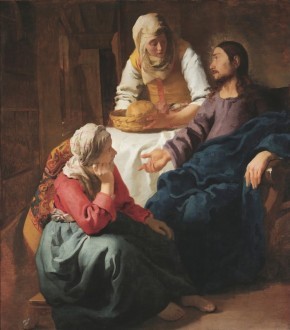 The girl, Martha, is excited: seeing the prophet Jesus in her home, who with a few disciples has accepted the invitation to dinner, fills her with joy. It is not the first time that the prophet has come to their home. They have had the honour of welcoming Him on other occasions and He had always appreciated Martha's work. But this time it is a special occasion and the girl feels the solemnity of the moment and her whole being is imbued with the importance of what she is experiencing.

Jesus takes a round thin flatbread (pita) and lays it on the earthenware plate in front of Him. The young woman smiles happily: she has prepared the pita breads herself and baked them on the stone. He takes some chicken meat, adds green leaves and onion and wraps it all in the pita. The men sitting around the table ask Him questions, which He is happy to answer as they share that meal of friendship.
Martha goes to the kitchen and brings a loaded cheeseboard that she puts on the table. Jesus smiles at her and she thanks Him for the miracle He performed on her brother Lazarus, who is also seated at the table.

Only twenty-four hours earlier, Lazarus was in his tomb sealed by a massive stone, made ready for eternal sleep. His sisters, Martha and Mary, had nursed him through his illness and in despair had sent for Jesus (John 11:1-46), in the hope that He would heal him. But Jesus, busy elsewhere, was able to arrive only four days after the death of Lazarus, when it was already too late. He had gone straight to the tomb, where He found the two sisters sitting and weeping. The sun filled the streets of Bethany with light and the tombstones looked almost white. 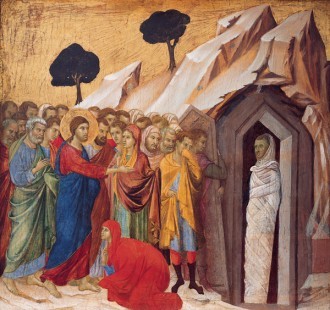 Jesus had the huge stone covering the entrance to the tomb rolled away and called Lazarus, ordering him to come out of the tomb. And Lazarus came out, dazed and with the ritual bandages still wrapped around his body. The crowd gathered in front of the tomb knelt before the divine miracle. And Lazarus walked home, flanked by his sisters and followed by the crowd.
The same crowd that was now packed in front of the house, waiting for Jesus to finish His dinner. So many want to see Him, touch Him, express loyalty or gratitude to Him. There were also a couple of invalids, waiting for Him to miraculously heal them.

Mixed in with the crowd were also three men, who had nothing to do with the others. They appeared stern and frowning; their clothes showed that they belonged to the class of priests and Pharisees. Annoyed, they left. That evening, they decided that Jesus should die, and with Him Lazarus and his sisters. We know the rest, at least as far as Jesus is concerned.

But the fate of Lazarus and his sisters is partly shrouded in mystery. What is known about them is that they were born and lived in Bethany, a town near Jerusalem. Lazarus was not a disciple of Jesus, but one of his most faithful followers. Both he and his sisters are present in the Gospels and, unusually, they are mentioned as hosts of Jesus, who visited their house, as on the evening described above (John 12:1-8), when they dined together after He had raised Lazarus. Among their dishes was shawerma, whhich is still popular today both in Israel and in Jewish communities in other countries (see recipe).

The end of Lazarus and his sisters is also partly shrouded in mystery. After this supper, Lazarus no longer appears in the Gospels or in any other New Testament writing. According to tradition, after the resurrection of Jesus and the first persecutions at home, Martha emigrated with her sister Mary of Bethany, her brother Lazarus, Mary Salome, Mary Jacobé and other disciples. 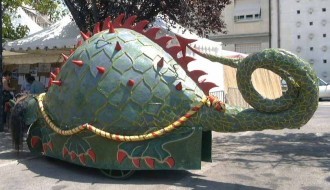 They landed in 48 A.D. in Saintes-Maries-de-la-Mer in Provence, where they brought the Christian faith. A popular legend says that the marshes of the area, the Camargue, were inhabited by a terrible monster, the Tarasca, which spent its time terrorizing the population. Saint Martha, simply with a prayer, shrank it in size, so much so that it became harmless, and led it to the city of Tarascona.

According to the Legenda aurea by Jacopo da Varazze (1228-1298), Lazarus went to preach in France with his sisters and became the first bishop of Marseilles.
According to an Eastern tradition, however, Lazarus became bishop of Citium (present-day Larnaca), on the island of Cyprus, and remained there for about thirty years. Already in the 4th century, this version became widespread and is supported by the discovery, in 890, of a tombstone with the inscription “Lazarus, the friend of Christ”.
The relics were later transferred to Constantinople and then to France by the Crusaders. In 1972 a marble ark containing human remains, believed to be those of Lazarus, was found under the altar of the church of Larnaca. According to this hypothesis, the transfer of the relics to Constantinople was only partial.

In the Catholic Church Saint Lazarus is remembered on 29 July together with his sisters Martha and Mary. In the liturgy of the Roman rite Lazarus is mentioned in the prayer In paradisum of the Mass for the Dead (Requiem). In this passage Lazarus is referred to as 'poor on earth’, because, according to the medieval exegesis, Lazarus of Bethany is the same man who, in the parable of Lazarus and the Rich Man (Luke 16:19-31), begs for alms at the door of a rich man.

Dedicated to St Lazarus, together with St Maurice, is the small church in the castle of Lierna (on Lake Como). Initially, the Empress of the Holy Roman Empire, Adelaide of Burgundy, from 951 to 973, used to reside in the castle of Lierna, and St Maurice was the patron saint of the Holy Roman Empire; to him she dedicated the cult of the little church of Lierna, which protected her during naval battles; for this reason, its apse faces inwards, it is small, and is not visible from afar.

On 22 January 1573, in this church in Lierna, Emanuele Filiberto of Savoia founded the dynastic Order of the House of Savoy, calling it the Order of Saints Maurice and Lazarus. Over the centuries, the village of Lierna maintained this protection and privacy as a place of retreat for royalty and nobles.
The Byzantine calendar celebrates Lazarus on the Saturday before Palm Sunday. In Russia, the Lenten fast is relaxed on this day and it is customary to eat caviar.

The uniqueness of the three siblings - Lazarus, Martha and Mary - lies in their relationship with Jesus, which was not only one of faith, but also convivial. And this is a human aspect of Jesus, son of God, but also man.