Lawrence, the saint who teaches the fervour of faith

Saint Lawrence is the patron saint of various categories of food workers, such as cooks, pasta makers, rotisserie workers and pastry makers. He is depicted as a young deacon dressed in the dalmatic. His iconographic attribute is the gridiron, because of the torture he suffered. In the story of his martyrdom, legends and historical truths are woven together, but his story certainly shows us the beauty of sacrificing oneself for the Lord.

- THE RECIPE: PASTA WITH BROCCOLI AND BREADCRUMBS 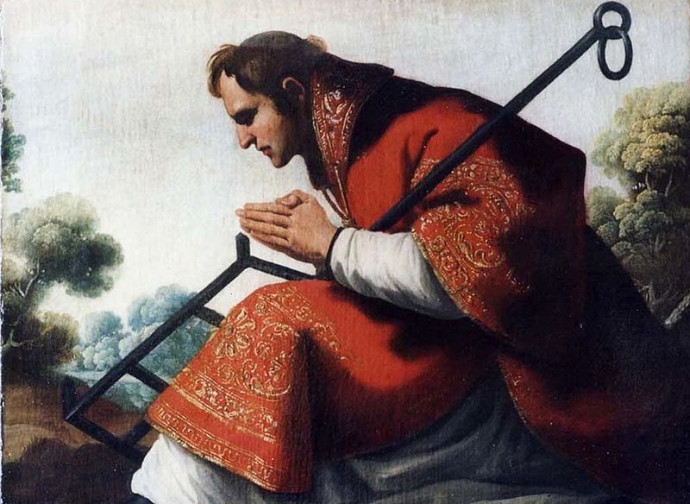 St Lawrence the Martyr is the patron saint of cooks, but also of pasta makers, rotisserie workers, and pastry chefs. In iconography, St Lawrence is depicted as a young deacon dressed in the dalmatic, with the attribute of the gridiron, indicating the technique of his torture. (The dalmatic was a garment used in Roman times, which then remained in use as a liturgical vestment consisting of a long tunic with wide sleeves that reached down to the knees. It is the habit of deacons, who wear it during liturgical celebrations. Like the chasuble for presbyters and bishops, it is the outermost garment). In addition, according to hagiographic texts, he was given the palm of martyrdom and the purse of the treasure of the Roman Church, which he redistributed to the poor.

Legend and historical truth mingle as details in Lawrence’s story and both serve to understand the Christian significance of the saint. He was born around 225 in the Roman Empire, in Hispania Tarraconensis (Aragon), in the city of Huesca (Osca in Latin), but his birthplace is uncertain; there are sources that state that he may have been born in Valencia, the birthplace of his parents. But Huesca is the birthplace more generally accepted by the sources. As a young man he studied theology in Zaragoza, one of the most prestigious centres of learning. One of the professors of this famous study centre was the future Pope Sixtus II. A mutual esteem was born between pupil and teacher, which would last until their deaths.

They moved to Rome and when Sixtus became Pope in 257, Lawrence was ordained deacon (he is also the patron saint of deacons). The Pope entrusted him with the administration of Church property and the care of the poor. For this mission, he is considered one of the first archivists and treasurers of the Church.

The Emperor Valerian (Publius Licinius Valerianus, 200-260) proclaimed an edict of savage persecution of Christian worship and gatherings in cemeteries. Many priests and bishops were sentenced to death, while nobles and senators who converted to Christianity were exiled. Among Valerian's victims were Pontiffs Stephen I (who had his throat slit on the papal throne) and Sixtus II (beheaded on 6 August 258); bishops Cyprian of Carthage (beheaded in northern Africa), deacons such as Agapitus and Lawrence. Only a few days passed between the death of the Pope and that of Lawrence, since the latter was martyred on 10 August 258. The martyrdom of Lawrence is surrounded, as mentioned, by legends combined with truths. The fact is that the sources indicate that he was condemned to death on a red-hot grill, which is why he is always depicted with a small grill. There is also a story that wants to show the power of prayer in Lawrence who, during the torture, is in such communion with the Lord that he does not even feel the physical pain and says to his tormentor: “I am already cooked on this side, you should turn me over”. Of course, it is difficult to imagine such a sense of humour, but perhaps that is what happened. The executioner turned him over and he died. This episode, contained in an ancient Passio, is also mentioned by St Ambrose in the De officiis ministrorum, in which he quotes the phrase with which the archdeacon of the Church of Rome, addressing his torturers, says: Assum est.... versa et manduca, “It is cooked... turn me over and eat”.

The veneration of Lawrence is attested as early as the 4th century. Constantine I, Roman Emperor from 306 to 337 (he who promoted the spread of Christianity), built an oratory on the site of his martyrdom, a building which was extended by Pelagius II (the 63rd Pope of the Church, from 579 to 590). A century after Constantine, Sixtus III (432-440) built a great basilica: it had three naves and the apse resting on the ancient church, on top of the hill where Lawrence was buried. In the 13th century Honorius III (the 177th Pope of the Catholic Church, from 1216 to 1227) united the two buildings, which form the basilica that still exists today. St Lawrence is the patron not only of the food trades mentioned at the beginning, but also of librarians, booksellers, firemen and glass workers. Many places of worship around the world are dedicated to him: apart from the Basilica of St Lawrence Outside the Walls (in Rome, see photo above), there are many churches named after him and even two cathedrals: in Alba, Piedmont (the saint's reliquary is part of the Cathedral Treasury), and in Sant Feliu de Llobregat, Spain (photo opposite).

Let us remember on 10 August to have a thought and to dedicate a prayer to this wonderful saint, who teaches not only the fervour of faith but also the beauty of sacrificing oneself for it. We too can make sacrifices, however small, like that of observing Lent.