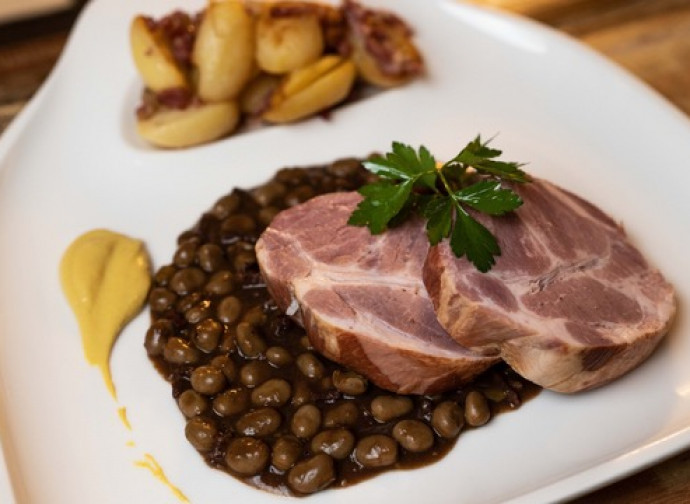 Our recipe today is a tribute to Echternach Abbey and by extension to its host country, Luxembourg. The typical Luxembourg dish is “Judd mat Gaardebounen”, or smoked pork accompanied by broad beans. Pork is, in fact, the most widely used type of meat in the country's diet.

The origin of the word 'judd' is unclear. One possibility, suggested by linguist Jean-Claude Muller, a member of the Grand Ducal Institute of Luxembourg, is that it derives from the Spanish word for bean (judía). Muller explains that in Galicia there is also a pork dish served with broad beans that is locally called judía. Muller theorises that the dish was brought to Luxembourg by Spanish troops in the 16th or 17th century. If this is indeed the case, then “Judd mat Gaardebounen” comes close in meaning to “Beans with beans”, which does not correspond to the reality of the dish. It has also been claimed that the term comes from Hebrew (judío) because “the dark colour of the beans reminded some people of the dark skin of Spanish Jews”. But this is all speculation.

The fact is that a document written by a traveller in the 14th century testifies that on his way to the Abbey of Echternach he spent the night after eating a delicious dish of pork and beans.

Return to the simmer for 30 minutes over a low heat and then add the chopped vegetables (carrots, leeks, celeriac), the whole onions (into which you have stuck the two cloves) and the bunch of herbs. Cook for an hour and a half on a low heat. Using a slotted spoon, remove any impurities that have come to the surface of the stock.

While the meat is cooking, place the broad beans in a pot of salted water. Start in cold water and bring to the boil. Cook for 5-10 minutes until the broad beans are tender. Drain, peel and keep warm. Note: If you can't find fresh broad beans, preserved broad beans, which can be found in all supermarkets, are just as good. In this case it is not important to cook them, just rinse them and use them directly.

Prepare the sauce: melt the butter in a saucepan. Pour in the flour and stir to obtain a reddish mixture (roux). Add to your roux 2 or 3 ladles of broth obtained from cooking the meat and stir. Add the broad beans to the sauce and cook for 10 minutes.

Remove the meat from the stock. Cut the collar into slices. Arrange the slices on a plate with the broad beans in the sauce and serve with roast potatoes, garnished with a few sprigs of parsley.