The recent comments of Archbishop Paglia, president of the Pontifical Academy for Life, caused such a stir. He decleared "heretic" whoever says that Judas is in Hell. But the Gospels, as well as many saints and popes, say the opposite. And also about the religious assistance to those who persist in asking assisted suicide, the words of Paglia contradict the Magisterium. 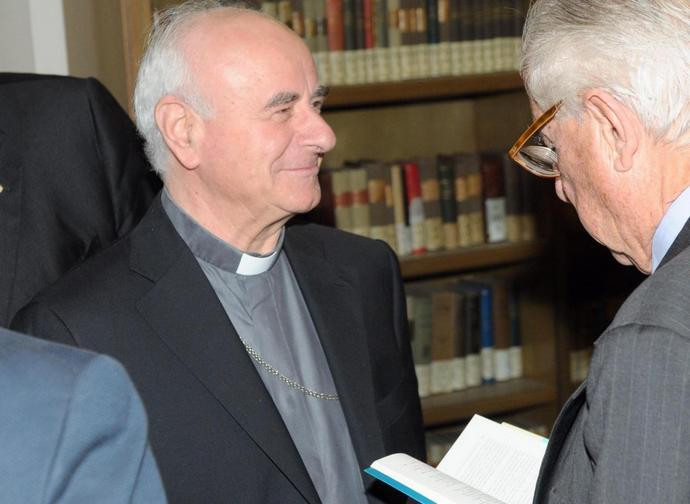 Jesus Christ is a heretic. Ah yes, dear readers, this is the sad truth. Or perhaps you doubt the assertions of Archbishop Vicenzo Paglia? His Excellency made a presentation on December 10 at a press conference preceding the international symposium Religion and Medical Ethics: Palliative Care and Mental Health During Old Age, organized by the Pontifical Academy for Life and the World Innovation Summit for Health, held in Rome at the Augustinianum on December 11 and 12 (see here).

Responding to several questions posed by a journalist, Archbishop Paglia informs us that “for the Catholic Church, if someone says that Judas is in hell, he is a heretic.” We have already had to hear several times from the pulpit (excuse me, I mean the ambo) of Santa Marta that Judas actually repented (April 10, 2016), that Judas is “the most perfect lost sheep” that the Gospel shows us (December 6, 2016), and, a few days later, that “poor Judas the traitor and repentant sinner was not welcomed by the shepherds” (December 13, 2016). Then we had the whole series of interventions on the interpretation of the capital in the Basilica of Saint Mary Magdalene in Vézelay, France, as if it represents the salvation of Judas – an interpretation that is based on the book of  Eugen Drewermann, Il Vangelo di Marco. Immagini di Redenzione [The Gospel of Mark: Images of Redemption], but in reality is in error.

The Gnostic theme of the salvation of Judas is, unfortunately, not new; the novelty lies in the anathema launched by Paglia, who must not have realized that he had thrown himself against Jesus himself, who, in speaking of Judas, left no room for doubt: “The Son of Man indeed goes, as it is written of him, but woe to that man by whom the Son of Man is betrayed! It would be better for that man if he had never been born!” (Mark 14:21). What is worse than not being born? Whoever holds the Catholic faith on the existence of Hell knows the answer.

The curse recorded by the Gospels was never made by the Master against any of the other disciples, even though they too abandoned him, nor against Peter, who denied him three times. Evidently Jesus, who is God, knew that the traitor would not repent. But this is not the only part of Scripture that leads us to have a not-too-optimistic view about the eternal destiny of Judas. Jesus, praying to his Father, addressed himself to Him with these unforgettable words: “None of them was lost except the son of perdition, in order that the Scripture may be fulfilled” (John 17:12).

It’s true that we have now learned from the Superior General of the Jesuits that, in the absence of imperial tape recorders, we don’t know exactly what Jesus said; but it will be conceded to us that these words demonstrate at least that the first Christian community believed – and how! – that Judas ended up in the deepest depths. All of them heretics.

The writers of the Catechism of the Council of Trent are also heretics, who, referring to the virtue of penance in paragraph 241, warned against that excess that is called despair: “Such seems to have been the case of Cain, who cried out, “My sin is greater than the pardon of God,” (Gn 4:13) and such was certainly that of Judas, who repenting, hanging himself with a noose, lost both life and soul together (Mt 27:3; Acts 1:18). Perhaps for Cain, but certainly for Judas. Anathema sit!

Saint Leo the Great was also a heretic, who in his 52nd sermon (his eleventh on the Passion) speaks of the despair of Judas and affirms that “the traitor could not obtain this pardon, because, as  the son of perdition, having the devil on his right hand, he reached the point of despair even before Christ had completed the sacred and efficacious work of universal Redemption.” And he adds, to avoid any doubt, that “the wicked traitor rose up against himself, not with the remorse of those who submit to penance, but with the folly of those who go to perdition. Thus it was that, having sold the author of life to his murderers, he also committed sin in the act of dying, and so increased his condemnation [in augmentum damnationis suae].” And we could continue thus with other saints and doctors of the Church. Obviously they were all heretics.

But why does Archbishop Paglia seek to anathematize the insensitive accusers of Judas in the context of a reflection on palliative care?

The Swiss Bishops’ Conference has decided to create doctrinal and pastoral guidelines on assisted suicide, which is rampant in Switzerland, with the document A Pastoral Approach to The Practice of Assisted Suicide (the French text may be downloaded here).
The bishops express their radical opposition of the Gospel to this practice and they affirm the duty to defend human life from conception to natural death. If suicide remains “an intrinsically evil act,” then assisted suicide is even more grave, inasmuch as it is a “premeditated, organized, and planned action.”

The document then addresses a delicate pastoral question: faced with various requests from persons who choose assisted suicide asking to be accompanied in this act by the presence of a priest, the Swiss bishops call for these persons to be accompanied as much as possible, in the hope that they will change their mind. But then they add that “the pastoral minister has the duty to physically leave the room of the sick person at the actual moment of the act of suicide.”

The reason for such an approach is explained with clarity: “Refusing, in this precise moment, to assist a person who voluntarily takes his life, the pastoral minister testifies with the facts to the option of the Church in favor of life. [...] Despite all of the efforts made, the presence of a pastoral minister at the side of  a person who deliberately commits suicide could be interpreted, perhaps after the fact, as support or cooperation: not only the family members involved and the associations themselves could interpret this action as an endorsement of assisting in the act of suicide, but society could think that the Church endorses these actions: the risk is invariably that of an obscuring of the public witness of the Church in favor of life.”
The Swiss bishops therefore find the right balance between giving human and spiritual assistance to the person and at the same time witnessing to the condemnation of assisted suicide.

Archbishop Paglia, with all the precision and delicacy of a bull in a china shop, responding to a question about the pastoral situation addressed in the document, offered expressions like this: “But nobody should be abandoned, in whatever situation they find themselves [...]. To accompany and hold the hand of someone who is dying is a great duty that every believer ought to promote, as well as the fight against assisted suicide.” Well then. While we are at it, why not stand next to a woman in the moment she is having an abortion? Or perhaps next to a hit man while he murders an innocent person? After all, the Lord does not abandon anyone.

Paglia then added: “I always do funerals for those who commit suicide.” Wrongly, because while it is true that the Code of Canon Law (can. 1184) currently in force does not explicitly mention those who commit suicide among the categories of those who must be refused ecclesiastical funeral rites, all the same it is true that there are however “manifest sinners, to whom it is not possible to grant funeral rites without giving public scandal to the faithful.” Faced with a suicide, especially if it involves the aggravating circumstances of being predetermined and refusing to reconsider, there is a need to at least take into serious consideration the possibility that this is precisely one of the cases foreseen by the Code of Canon Law.

Then, in the perfect style of [The Community of] Saint Egidio, clarifying that he had not “read the document [of the Swiss Bishops] in detail,” Archbishop Paglia sidestepped the argument, with the usual excuse of one who throws a stone and pulls back his hand: “This topic goes beyond the laws and I do not want to make a rule to be contradicted and so on. I would like to remove ideology from these situations forever and for everyone. [...] Let’s avoid getting stuck in ideological debates: what is most important is accompaniment.” Of course! Accompaniment... whether we are accompanying towards salvation or towards eternal condemnation matters little, the important thing is to accompany. And above all to put our brains on the shelf, otherwise we become ideological.

The moral of the story is that Archbishop Paglia exhorts us to accompany without a goal, never refusing a funeral to anyone who commits suicide, but not sparing the accusation of heresy against those who say that Judas is in hell. The question rises spontaneously: since the aforementioned canon also affirms that funerals are to be refused to “those who are notorious apostates, heretics, and schismatics,” does this mean that Paglia will refuse them to us, since we believe that Judas is in the unquenchable fire?