“With lockdowns and distance learning we have forced children into on-line addiction”. This is the word of neurologist Rosanna Chifari Negri, who raises the alarm with the Daily Compass: “It is the phenomenon of the on-line brain that affects the frontal lobe, the seat of decision-making and strategy, which becomes atrophic and loses neurons irreversibly. The thinning of the cortex means neuronal loss. It is not possible to fix the memory. All the children tested show loss of memory and attention and also have social psychopathologies”. 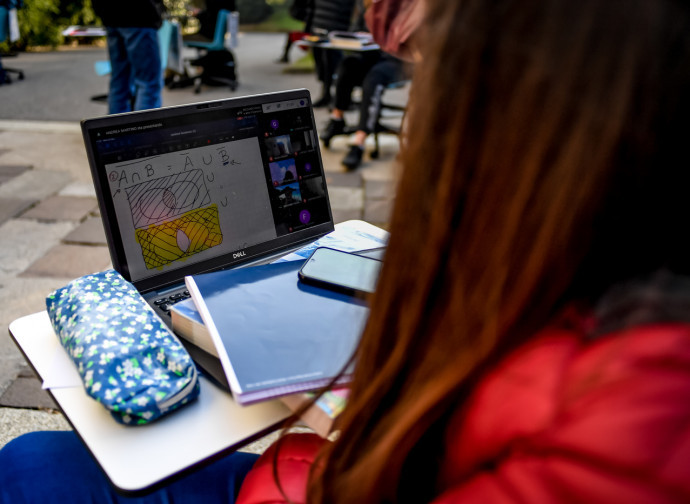 Nowadays, the only problem in the universe is called SARS-COV-2 and eradicating it has become the be-all and end-all. It matters little if deaths from other diseases have increased, if the economy is destroyed, if poverty increases, if the manifestations, even extreme ones, of psychic problems caused or worsened by the lockdown are there for all to see. The regulations in place have the same ‘wisdom and foresight’ as a person who, in order to kill a mosquito, starts shooting wildly, heedless of hitting other things, be it animals and people. The important thing is to kill the mosquito. The costs of the constant closures are devastating; it is mainly children and adolescents who pay the highest price. We spoke about this with Professor Rosanna Chifari Negri, a neurologist, author of over 70 scientific publications and invited speaker at international congresses, especially on the problem of epilepsy.

Doctor, can you tell us about your study?
I did a review of the international literature on the neurological damage of lockdown, especially on adolescents and young people. There were 768 scientific papers confirming the relationship between lockdown and mental health in young people. The damage observed concerns not only mood, i.e. depression, anxiety, behavioural disorders, etc., but also a 30-40% increase in addictions.

Which addictions have particularly increased?
In the adolescents and children’s group, especially screen addictions. Distance learning has not helped.

What do you mean?
Other colleagues, in different parts of the world, have published more than one work, showing that the ‘on-line brain’, that is, the brain that stays online for a long time, has organic damage. We usually tend to think that it is the intake of substances that causes anatomical damage; this is a fact that is now clearly established, even if we often do not realise the extent of the problem (I am referring to the legitimisation of marijuana, which has been suicidal). But exposure to the screen is no less dangerous. And with lockdowns we have forced kids into on-line addiction: with distance learning keeping them glued to the screen for several hours; then social media, to keep in touch with friends, since you can’t see them; and then Netflix.

Can you specify what these anatomical alterations are and what they entail?
The on-line brain ‘hits’ the frontal lobe, the seat of decision-making, of strategy, which becomes atrophic and loses neurons irreversibly. The thinning of the cortex means neuronal loss and the latter means a functional loss. One cannot retain memories, there is a decline in learning. All the young people tested show a loss of memory and attention (the same applies to adults) and also have social psychopathologies. There is also a decrease in vocabulary, which has been frighteningly reduced to 200-300 words, the ones they use for messaging.

In reference to the problems caused by lockdown, you spoke of a ‘discontinuity syndrome’. What is this?
It is a neologism to describe this emergency situation that we have been experiencing for a year now. It clearly does not yet have a DSM [Diagnostic and Statistical Manual] classification. It concerns those problems that we have described, caused by the interruption of routine, isolation, the interruption of work or school activities, in other words a sudden discontinuity with normal life. Prof. Crepet, with great common sense, made an appeal for schools to be opened, because distance learning does not rebuild that social environment that is fundamental to the structuring of a healthy personality.

What are the damages of smart-working on adults?
In April I will be giving a talk on this very subject for Studio Mascheroni, a law firm that interacts with companies. It’s going to be rather awkward, but I’m going to talk about the damages caused by smart-working and try to make it clear that actually avoiding this way of working will benefit companies in the long run. People who work in smart-working mode are more likely to experience burn out - a syndrome accompanied by a series of symptoms (lack of interest, exhaustion, lack of enthusiasm, and even depression) - and therefore perform much less well. Limiting and dosing smart-working could be a forward-looking attitude.

Have other addictions also increased?
Yes. Drugs, for example. One might ask: how, if they can’t go out, do they manage to meet the dealer? I think that asking the postal police this question would be of considerable interest and would uncover very daring strategies. There has been a 27% increase in the consumption of marijuana and other substances; I would remind you that the consumption of these substances can lead to schizophrenia, due to the altered formation of brain circuits. Alcoholism has also increased.

Do people also tend to eat more?
Yes, and this has a very specific reason. During forced isolation, there is an increase in the frequency of stimulation of the hunger centres at hypothalamic level, which leads to eating disorders, a sort of bulimic hyperphagia, which then obviously has an impact on health. Your diabetologist colleagues will tell you that there is an increase in dietary diabetes, in turn a fragility factor for those who contract Covid.

A dog biting its own tail. In addition to the lockdown, there is also the issue of constant uncertainty: everything changes every week. You can’t leave the region or the municipality, you go to school or stay at home, a certain business can stay open or it must close. What impact does this state of affairs have on the psyche?
Definitely an anxiety syndrome. Uncertainty leads to anxiety, which can have a depressive epilogue. Remember that when too much cortisol is produced, in repeatedly anxious situations, there is also a risk of memory loss and the phenomenon of so-called ‘freezing’. Equally serious is the attitude of giving up one’s freedom. We are passing on a terrible message: irrational and, pardon me, headless central management can do whatever it wants without any reaction. A technique reminiscent of Chomsky’s boiled frog.

What can you tell us about suicides or attempted suicides, especially in adolescents?
There has been an increase in both the carrying out and the ideation of suicide. The figure is worrying, and is absolutely objective and quantifiable. It is reported to us by tests carried out on the young people themselves by the Gaslini Hospital in Genoa, as attested by Prof. Lino Nobili. And this increase is not only found in children, but also in adults, for other reasons, including the loss of a job or the prospect of losing one. Cases in the news and psychiatric institutions attest to this.

An appeal?
This cannot go on; for mental health purposes, we are in a totally unhealthy context. The fight against the virus should not be done with lockdowns. At the February meeting, I talked about the Swedish model, which did not implement lockdowns and had no worse data than ours. And I am talking about real scientific data. Fear ends up lobotomising the people and making them uncritically subservient.