Iraq, praise for the Pope calls for an adequate response

Pope Francis' visit to Iraq, which illustrated that the road to dialogue is a viable one, has no doubt generated hope among the local population. However, it is now up to political and religious leaders to demonstrate their willingness to lay down their arms and fight corruption. For Christians, the desire to return to their homes and lands - previously occupied by Isis and now by Shiite militias - risks remaining a mere hope. 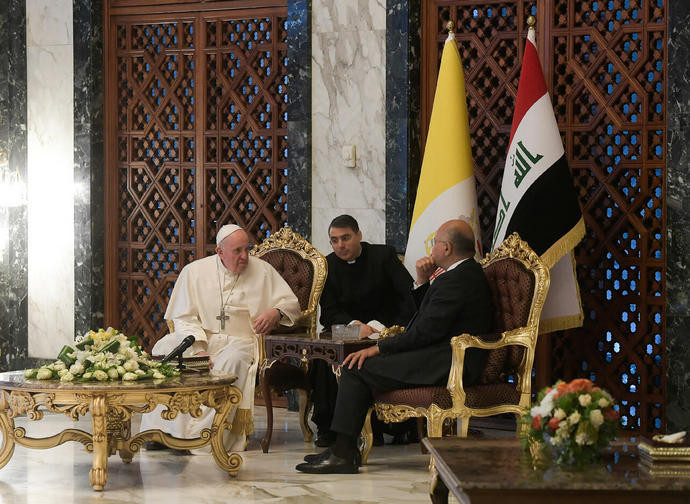 The enthusiastic words of the Patriarch of Babylon of the Chaldeans, Cardinal Louis Raphael I Sako, are enough to paint a picture of success of the recently concluded visit to Iraq by Pope Francis - who returned to Rome yesterday. Sako’s words inspire hope, first and foremost for the Christian population which has remained in the country. Sako spoke of an "Advent" for Christians and Muslims and of the "message of solace and peace" the pope brought to Iraq. Following these three intense days, the Patriarch was very confident about the positive impact that Francis’s visit will have, both politically and in terms of relations among the nation’s diverse faith communities.

It is an understandable position, considering the situation of Christians in Iraq: in 2003 they numbered 1.5 million, back when the Anglo-American invasion triggered the Second Gulf War. Today - after years of repeated civil war and ISIS domination – the Christian population has been reduced to a mostly scattered total of 400,000 (150,000-200,000 according to some estimates).

Beyond the content of the speeches, Pope Francis’s arrival was all that was needed to get the international community to remember this destroyed country and to recognise the right of Christians to inhabit this land. The pope’s strategy, now a proven one, was to avoid dealing with thorny issues (even avoiding in any way appearing as a Christian "advocate") so as to prioritise having personal meetings, giving weight to examples of inter-faith solidarity, and focusing on an invitation to all to use dialogue as a way of resolving problems.

Thus, in Iraq, after years of war, a wall of mistrust and hostility has been erected among the country’s various communities,  said Fr. Aisen Elia Barbar, the first Iraqi Salesian priest who is now working in Florence.  "The pope has loosened some knots, he has broken the ice. He has shown us that we can talk and respect one other. In this sense, his meeting with the Grand Ayatollah Ali al-Sistani was most significant. Although he refused to sign any common document like the one in Abu Dhabi, he acknowledged the pope in a very important way: he stood up to greet him, which is an unusual gesture that shows the dignity he sees in his interlocutor. Moreover, it is the first time in years that al-Sistani has been seen publically, so much so that in the past a whole host of rumours about his health were swirling around Iraq. There were also questions raised about the authenticity of some photos of them that were released to the public.

Positive reactions, from Muslims as well, tell us that this sort of gesture really was necessary. It was  sign of his nearness to Christian communities that have suffered, a form of embrace of all the other minorities that have paid so dearly for this war. It was a sign of his openness to dialogue with all the leaders of various communities and of the government.

If anything, there was some confusion regarding the substance that Pope Francis intended to use to complete such gestures. As confirmed yesterday during his return flight press conference to Rome, Francis says the way forward is that of the Abu Dhabi document and Fratelli Tutti, his encyclical  we have repeatedly criticised (see here and here) as well as his reference in Iraq about common Abrahamic filiation, which involves Jews, Christians and Muslims. We have already had the occasion to note this misconstruction (see here and here). Above all, Francis gives the impression of not fully understanding Islamic thought – a feeling reinforced by some passages taken from the flight’s press conference transcript  – such as those regarding their conception of God, Abraham, and society.

Where people have not spoken for a long time, getting back together and talking in person is certainly very important, and nothing can diminish the significance of what just happened in Iraq. However, in the long run, if the substance of the dialogue is not clear, then there is a risk of constructing arguments built on sand which leads to further misunderstandings.

In any case, the real challenge for Iraq begins now. "First of all, it is up to the political leaders and the government to change their strategy", said Fr. Aisen Elia Barbar: "The Church has done more than her fair share. Now  it is they who must show their real intention to disarm militias and put a stop to corruption.

This it is not to say that from now on the road for Christians is an easy one: "The repatriation of Christians from abroad is at the moment impossible, the social and economic conditions of Iraq will not allow it,” said Fr. Aisen. “But even for displaced people it is very complicated for them to return to their villages and cities: they are all good at talking, but there is a lack of essential services, electricity, work, safety. Most importantly, after ousting ISIS, it was the Shiites who took land and homes from Christians. Do you think Christians can simply come back and knock on doors to ask for them back? Based on these things, the answer to the Pope’s extraordinary gesture will truly be measured."

Nor should we underestimate the profound division that exists in the Shiite world: Ayatollah Ali al-Sistani represents a theological school that is opposed to the theocratic school of the Iranian ayatollahs, one which also has solid foundations in Iraq.

The possibility of bringing true peace to Iraq, of returning to a coexistence between the country’s various factions, must therefore reckon with several complex factors. Yet, it is above all up to the Iraqis to transform the extraordinary atmosphere of the pope’s visit into energy to rebuild their country and society.