A new episode of the rape of a girl in India has brought the spotlight back to a serious problem in a country which reported 33.977 cases of rape last year, an average of 93 per day, despite the fact that rape is punishable with the death penalty. The victims include even the tiniest children. But little will be resolved as long as the widespread mentality about the abortion of girls and the marriage of daughters does not change. 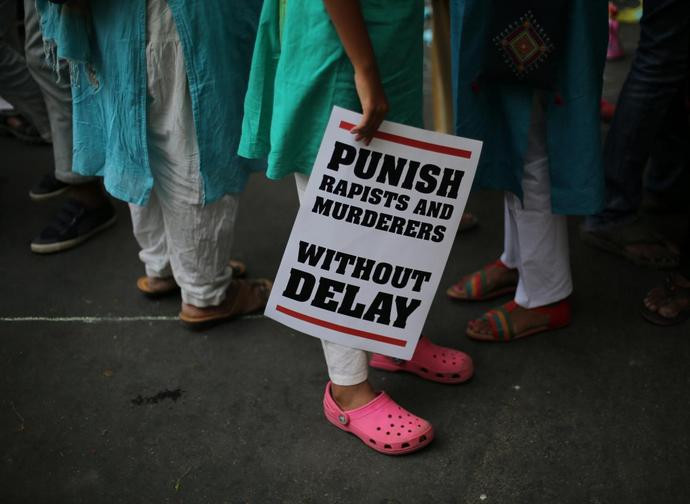 On April 22, a six year old girl was raped and blinded in the Indian province of Madhya Pradesh. The little girl was raped while she was playing with her friends right outside her house. Thanks to a tip, she was found by the police the following morning in an abandoned house in her village of Damoh not far from her home. Her wrists were tied together and there were wounds all over her body.

The police brought her to the nearest hospital to receive first aid and then to the hospital in Jabalpur where she is now recovering. The authorities of the district of Damoh immediately announced a 10,000 rupee reward for anyone who gave information leading to the arrest of the perpetrator. By following a trail of evidence, law enforcement arrested a 22-year-old man on the evening of April 23. The police revealed that the youth approached the girl and won her trust by offering her a caramel. The man confessed that he tried to gouge her eyes out so that in case she survived she would not be able to recognize him.

The local leader of the governing party Bjp, Uma Bharti, immediately demanded the death penalty for him. “We are talking about an act so inhuman that it is horrifying even to speak of it,” he said. “The trial ought to be expedited and the guilty man deserves the death penalty. Let’s all pray for the life of the victim.” Even Monsignor Felix Machado, the secretary-general of the Indian Bishops’ Conference, used harsh words: “It is an unforgivable act of brutal violence, a disgrace to humanity,” he said. “What impresses us is that this violence took place in a moment in which the world is terrorized by the pandemic, with the entire population forced to stay at home. This makes such a crime even more shameful.”

In India rapes occur frequently. The statistics from 2018 have just recently been published: 33,977 cases were reported to the police, an average of 93 per day. The victims are often children, even very little ones. On February 6, a 25-year-old man was arrested in Delhi who was accused of having violated a 5-year-old girl near the American embassy where her father worked as a servant. One of the most heinous cases also occurred two years ago in the same province of Madhya Pradesh. A girl was sleeping in the street along with her parents, who were balloon sellers, when shortly before dawn she was kidnapped, carried into the basement a few meters away and raped to death. Closed-circuit TV cameras filmed the culprit, a 21-year-old man who was a distant relative of her parents, who rode up on a bicycle, grabbed the girl and took her away. The tiny victim was only six months old.

There was one particular case of rape that caused particular dismay and made the entire country rise up. In December 2012 in Delhi a 23-year old female student was returning home on a bus with a male friend. Six men who were on board the bus beat both of them with an iron bar and took turns raping her. Then they threw them off the bus, naked and bleeding. Some passersby rescued them and called the police. The young woman died two weeks later.

Since then the rape law has been amended to include behaviour that previously was excluded, and in 2018 the government introduced the death penalty for anyone who rapes a minor. But the number of reported cases continues to increase. It is assumed that this increase is partly a result of the fact that more people are deciding to turn to the authorities and also because the number of women in the police force has increased. What is certain is that there is still a large number of victims, perhaps the majority of victims, who do not report the violence they have suffered because of fear, shame, the fear of stigma or distrust of the authorities. Only one quarter of the cases that are heard end with the accused being found guilty, and trials are very slow and often delayed. Between 2005 and 2016 only between 12 and 20% of the cases heard were bright to conclusion. In order to overcome this problem, in 2019 over 1000 trials were opened using an abbreviated process.

Certainty of punishment should serve as a deterrent, but many people think that a radical change of mentality is needed, that the violence will continue as long as women are considered the property of men. In 2013 the Archdiocese of Mumbai launched a campaign called “37 million lights” in order to raise awareness about all forms of violence against women. It was begun by lighting 37 million candles and lights in parishes because at the time that was how many more men there were than women in India. This is the result of the millions of girls who have been aborted or killed as soon as they were born in order to avoid the burden of raising them or having to pay for them at the time of their marriage, and also as a result of the higher death rate for women from suicide and domestic violence. The “37 million lights” campaign intended to oppose violence against women, especially by educating people about the dignity and sacredness of the human person: “crimes such as rape, murders for dowry, acid attacks, honour killings, and forced marriages for girls are all on the agenda – violence against women is as old as patriarchy.”

“Don’t tell your daughter not to go out, tell your son to behave well” was written on signs during the protests after the gang rape of the young female student that took place on the bus. On April 20 four of the six rapists were executed in the maximum security prison of Tihar, in Delhi. The fifth rapist was found dead in his prison cell in 2013 in an apparent suicide. The sixth, who was a minor at the time of the crime, was released in 2015 after spending three years in a reform institution, the maximum sentence for a minor. Death sentences had not been carried out since 2015.