Incarnation and Redemption are founded in the feast of the Epiphany

The adoration of the Child Jesus by the Three Kings and the gifts they offer Him attest to His true identity, the person of God the Son in whom divine nature and human nature are united for the salvation of the world. How contemporary the Feast of the Epiphany is, the feast of the light of Christ shining in Christian hearts for the salvation of the world! Today, the darkness that could deceive us and lead us away from the Light that is Christ has entered the Church itself. 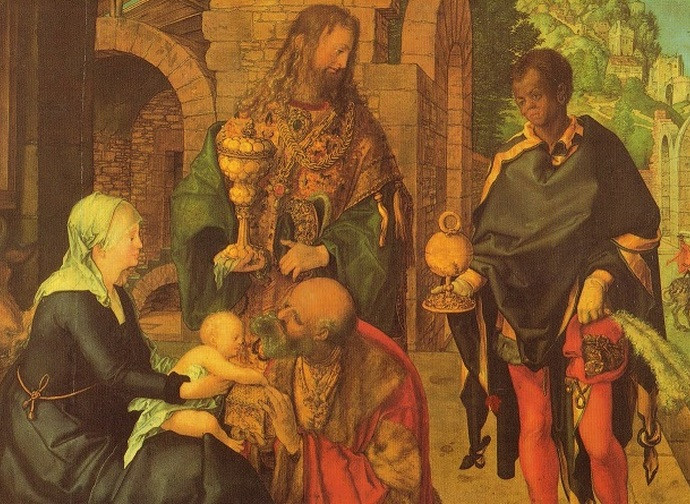 The great Mysteries of the Incarnation and the Redemption are inseparably linked. The Child Jesus is the Saviour of the world. For this reason, the Christmas star led the Three Kings to a manger in Bethlehem, in which Mary laid her newborn Divine Child and beside whom St Joseph, His putative father, watches over Jesus and the Mother of God, his true bride. Shortly afterwards, the Three Kings consulted King Herod about the place of the Messiah's birth. In fact, the Gospel relates:

And behold, the star, which they had seen coming up, went before them, until it came and stood over the place where the child was. When they saw the star, they were overjoyed. When they entered the house, they saw the child with Mary his mother, and they stood and worshipped him. Then they opened their caskets and offered him gifts of gold, frankincense and myrrh. (Mt 2, 9-11)

The adoration of the Child Jesus by the Three Kings and the gifts they offer Him attest to His true identity, the person of God the Son in whom divine nature and human nature are united for the salvation of the world.

The adoration of the Divine Child is in fact the adoration of the King of Heaven and Earth, the Messiah who alone saves the world from the tyranny of sin and death. The Three Kings and we ourselves are witnesses of the victory of the divine Light over the darkness of the world and its presumption to be divine, rebelling against God and His plan for salvation. We see, as the Three Kings saw, the fulfilment of the Word of God transmitted to us by the Prophet Isaiah:

Arise, clothe thyself with light, for thy light cometh; the glory of the Lord shineth upon thee. For, behold, darkness covers the earth, thick mist envelops the peoples: but the Lord shines on you, his glory appears on you. The people shall walk in thy light, and kings in the brightness of thy rising. (Is 60, 1-3)

In spite of the most violent manifestations of the spirit of the world, the unclean spirit which, by its nature, deceives and lies to us, leading us into the path of darkness and death, Christ, born in Bethlehem and worshipped by the Three Kings, has brought light to the world. It is the light that shines from His glorious Heart into our hearts, chasing away the darkness that leads to death and illuminating the way that leads to eternal life, to the heavenly home, which is our true destiny. Christ alive in the Church, uninterruptedly transmitted to us by the Apostles and their successors, who is the source and substance of our Catholic Faith, drives away the darkness that wishes to envelop and destroy us.

How contemporary the Feast of the Epiphany is, the feast of the light of Christ shining in Christian hearts for the salvation of the world! Today, the darkness that could deceive us and lead us away from the Light that is Christ has entered the Church itself. The response of many pastors to the crisis regarding the Wuhan virus has shown little faith in Christ and the salvation He offers us in the Church, especially through the Sacraments.
The faithful, looking to pastors for direction in a situation of such misinformation and confusion, have frequently been advised to follow what the State, with its supposed experts, says. Certainly the Church always respects the State and the truth demonstrated by science. At the same time, it has a duty to respond to the State with the awareness that its members are not only citizens of the earth but primarily citizens of Heaven. In the same way, the Church responds to the truth demonstrated by science with the charity of Christ.

We see the example of such a response to the truth of a very serious disease, the Black Death, in St Charles Borromeo and many other saints in times of plagues. It is not the State that teaches us how to respond, but we, following the sound doctrine of the Church, are called to be an example to the State.

In the Church today we hear much talk of the cosmos, of our place and even of Christ's place in the cosmos, as if the cosmos were the divine reality that illuminates and governs everything. We hear talk of an ecological conversion, instead of conversion to Christ, of a global worldly pact to save ourselves and our world, instead of God's eternal plan. At the present time, it seems that vaccinating the entire population against the Wuhan virus is the only way to save us from the plague.

It has even been said by some in the Church that vaccination is imposed on us by the very charity of Christ, even if reason, let alone faith, raises doubts. While the State threatens to make vaccination obligatory, even though, by its nature, it must be a personal choice, the Christian is bound to follow their well-informed conscience. It seems, in fact, that universal vaccination is a significant first step towards achieving a one-world government.

In many of these discourses there is not even a mention of Christ and the Mystery of the Redemptive Incarnation, or they even falsely present the mystery of Christ in the Church as subordinate to an idolatrous worship of creation itself, instead of the worship “in spirit and in truth” (Jn 4, 24) of the Creator. Mary's Divine Son, the Christ, is blasphemously presented as an element in the cosmos, which is instead held to be the true fullness of God's revelation to us.

We, with the holy Three Kings, worship Christ, the only Saviour of the World. Christ the Saviour never ceases to accomplish His saving work in the Church. He counts on each one of us, according to our vocation and our particular gifts, to bear witness, in every way possible, to the reality that we shall solemnly celebrate on the day of the Epiphany, namely that He alone is the fullness of God's revelation, that He alone saves us from sin and death, that He alone fills our hearts with divine grace, that He alone leads us on the way of the Cross that leads to our true destiny, the eternal life for which God the Father sent Him into the world, sent Him in our human nature.

The light of Christ that daily illuminates our hearts leads us, day after day, on the right path, to the worship of God “in spirit and in truth”, to the service of God according to justice, which anticipates the inauguration of “new heavens and a new earth, in which justice dwells” (2 Pt 3, 13) perfectly and forever. This is why we must not give in to discouragement or despair in the face of the lies, confusion and division that oppress society and even Holy Mother Church, but, with joy, we must take upon our shoulders, together with Christ, the suffering that is necessary in order to remain faithful heralds and disinterested servants of the great Mystery of the Redemptive Incarnation.

“The Magi, the first-fruits of the Gentile world, have been admitted into the court of the great King whom they have been seeking, and we have followed them. The Child has smiled upon us, as he did upon them. All the fatigues of the long journey which man must take to reach his God – all are over and forgotten; our Emmanuel is with us, and we are with him. Bethlehem has received us, and we will not leave her again; for in Bethlehem we have the Child and Mary his Mother. Where else could we find riches like these that Bethlehem gives us? Oh! Let us beseech this incomparable Mother to give us this Child of hers, for he is our light and our love, and our Bread of life, now that we are about to approach the Altar, led by the Star of our faith. Let us at once open our treasures; let us prepare our gold, our frankincense, and our myrrh, for the sweet Babe, our King. He will be pleased with our gifts, and we know he never suffers himself to be done in generosity., When we have to return to our duties, we will, like the Magi, leave our hearts with our Jesus; and it shall be by another way, by a new manner of life, that we will finish our sojourn in this country of our exile, looking forward to that happy day when life and light eternal will come and absorb into themselves the shadows of vanity and time which now hang over us.”(1).

In the Mystery of the Epiphany, in the Mystery of the Redemptive Incarnation, we find the source and the strength for the conversion of our lives to Christ, for the transformation of the world according to the salvific plan of God the Father, realised by God the Incarnate Son, through whom the Holy Spirit indwells the Church, indwells our hearts.

Led to the altar of the Eucharistic Sacrifice by the star, which is our Catholic faith, we offer our hearts, together with the Virgin Mother of Christ, Saint Joseph, the Putative Father of Jesus, and the holy Three Kings, to the glorious pierced Heart of the Lord. Our hearts, abiding firmly in His Most Sacred Heart, will become light in Him and will be light in our homes, light in our places of work and study, light to all whom we meet, and will drive away the darkness of confusion, error, sin, and death.