"I’m a smuggler, just like Moses." Stories of human traffickers

While hundreds of illegal immigrants have been arriving on Italian shores, the U.N. is pointing out the seriousness of illegal human trafficking, a business that earns transnational criminal organisations upwards of around $10 billion annually. Trafficking is not just tied to Mediterranean crossings, but to complex networks with dozens of bases set up along land routes spanning thousands of kilometres and with activities ranging from document forgery to marketing operations. What's more, human traffickers see themselves as do-gooders: “I make dreams come true,” says Kabir, a Pakistani trafficker. And a Siberian trafficker named Alexsandr says, "Moses was the first smuggler in history, I am just like him". 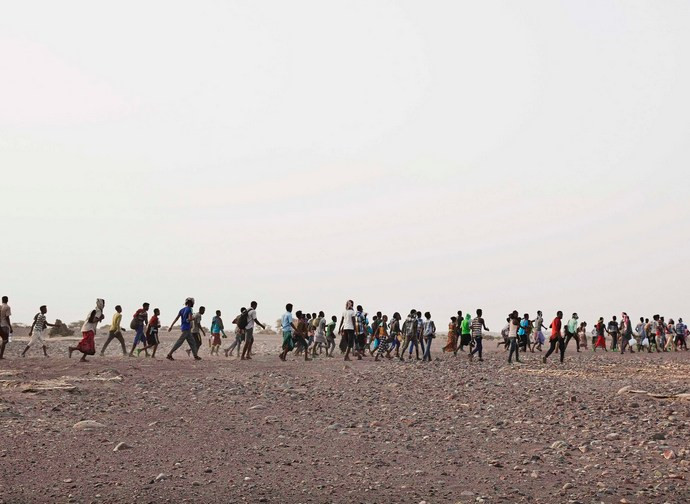 On 25 January, SOS Mediterranée's ship, Ocean Viking, landed in Augusta, Sicily. Aboard were 373 illegal immigrants who had started their journey by sea in four rubber dinghies. They had been transferred to the Ocean Viking while found off the Libyan coast. It is not known what became of the dinghies and who was operating them. It is likely that they returned to Libya, where they will organise new departures.

When we talk about illegal immigrants, we almost always neglect to consider the decisive role criminal organisations play, which no less than 90% of immigrants use to make the journey and reach various foreign destinations.

Most people only know about smugglers who pick up migrants on African and Turkish coasts and bring them to Europe. They know this, yet without realising that the human traffickers are part of complex transnational web of organisations with dozens of bases along land routes that span thousands of kilometres across four continents. These networks count on tens of thousands of staff responsible for a whole host of tasks, including finding potential clients and negotiating rates and payment terms. They also organise the various stages of the journey between countries and cities and for reaching drop off points after a Mediterranean or Atlantic crossing and, if necessary, arrange the transfer of immigrants to their preferred European country as the final destination.

The U.N. Office for Drug Control and Crimes (UNODC) explains that human smuggling follows the same dynamics as other transnational criminal trafficking organisations and, therefore, involves promotional activities, real marketing for attracting and convincing persons to emigrate while reassuring them about the journey and its outcome They provide enticing descriptions of  advantages of living in the country they seek as a final destination. In addition, traffickers in charge of making the initial contacts, in order to gain trust, usually rely on belonging to the same ethnic groups and communities of their migrant clientele . It is the traffickers who encourage many young Africans and Asians to emigrate by describing the paradise that awaits them abroad, while persuading their families that the journey is worth the cost, that the dollars spent will soon be recouped and that much more can be earned as soon as the family members reach Europe and start sending them back cash.

The UNODC estimates that human trafficking yields up to at least $10 billion in annual revenues. The activity makes heads of tracking organisations into millionaires and ensures attractive earnings for everyone involved. Indeed, the journeys cost thousands of dollars: figures that vary according to the length, difficulties to overcome, number of borders to cross, the means of transport used, the number of illegal documents  (travel, marriage, work, identity)  that are forged, counterfeit or obtained fraudulently and the overall risk of being caught by police border patrols. Moreover, the smuggling fares vary according to the emigrants, especially in terms of their economic status. More affluent migrants are ensured a safer and more comfortable journey.

Given the underground nature of trafficking, any available data are incomplete and, therefore, much remains to be understood about the running of the business. We know even less about the traffickers themselves:  who they are, why they chose such work, where and how they live. The few who agree to be interviewed under false names, justify their business, almost always claiming to be "helping others." Kabir, a Pakistani who for years has been bringing his fellow countrymen to Italy for around €7,000, says he keeps  €3,000- 4,500 for himself after paying his various collaborators. Kabir boasts: "Everyone wants to go to Italy. I help people, I make their dreams come true." A Siberian trafficker named Alexsandr says: "Moses was the first smuggler in history and I resemble him. I am like Moses."

A Syrian trafficker, Omar, even says he does two good things: he helps people live safely while waiting for the Syrian war to end and that it is his duty to provide for his family's needs. He is a 31 year-old married man with four children. He used to work as a bricklayer, but lost his job when the war broke out. He lived in a village near the Turkish border and decided to get into the illegal emigration business: "I have a family. In my situation you are willing to do anything to earn money,," he said. Omar knows full well he is conducting an illegal activity, but says, compared to other traffickers, he and his colleagues are altruistic and good people because they charge far less - as little as $150 per person while some groups demand as much as $500-$800 per migrant. Omar says his clients' young children travel for free and if someone is arrested he returns their fare. Omar describes his business as a "small 'company" with seven total workers, each with his own job and no boss. Omar explains that Syrian traffickers have unwritten rules. For example, he says, "Each group has its own routes. We can't use those of other traffickers. Our job ends when our clients cross the border and enter Turkey, while other groups have liaisons in Turkey who then bring immigrants to Germany, Sweden or other European nations.

The Afghan national, Elham Noor, brings his compatriots to Italy, France and Great Britain. He says he was himself once an illegal immigrant and that he paid $5,000 to be brought to Britain. While in Calais, France, one of the traffickers made a deal with him: €100 for every emigrant he put in contact with the organisation. He accepted and his career as a human trafficker began. Now each new client earns him up to a net $3,500. Noor returned to Afghanistan where his job is to find customers. His service is in high in demand since he has had great success and because he works for a large organisation. He acknowledges the human costs involved in trafficking, particularly shipwreck victims, but he says, his clients are aware of the risks of emigrating illegally. He admits the trafficking business pays well: $1,000 dollars for a journey from Afghanistan to Turkey, $4,000 from Turkey to Serbia, and another $3,500 dollars to reach Italy, totalling $8,500 in overall earnings.

Noor’s job is to make phone calls, organise money transfers and pay bribes to the Afghan authorities. At the time of his interview, last December, he said he was dealing with around 100 clients. "I apologise deeply to family members," he said. "if one of their relatives dies along the way. But I say from the beginning that anything can happen and they accept the risks. It is God who will decide whether to forgive me or not.”