Nine years ago on September 3, cardinal Andrzej Maria Deskur passed away. He was a close friend of Karol Wojtyla, ever since his days in seminary where the Polish saint manifested the gift of "infused prayer." Few people know that Deskur played an important role in the relationship between the future pope and Padre Pio. Nor is it very known at all that Deskur was commissioned by John Paul II to meet Sr. Lucia of Fatima to find out whether the 1984 Marian consecration had taken place as requested by Our Lady. The Daily Compass interviewed the director of Padre Pio TV, Stefano Campanella, who has gathered and studied Deskur's confidendential conversations with John Paul II. 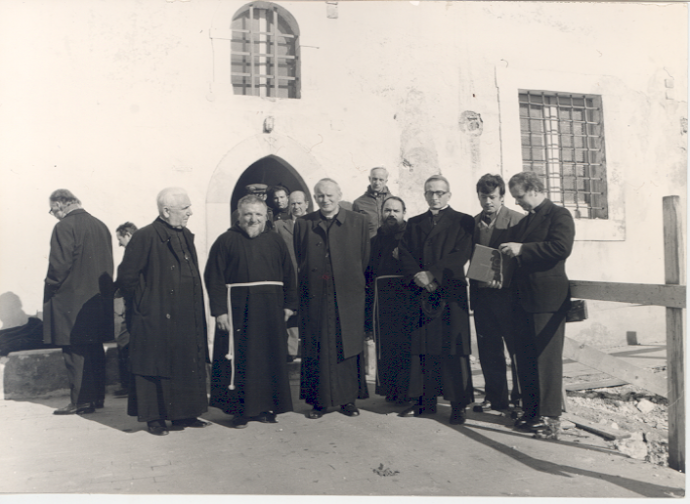 On October 17, 1978, immediately after his election to the papacy, John Paul II went privately to Rome’s Gemelli Hospital to visit a friend who had just suffered a stroke. The visit was officially considered the first papal "trip" outside the Vatican. On that day, the Polish pope released a very brief statement: "I came here to visit my friend, my colleague, Bishop Andrzej Deskur, president of the Pontifical Commission for Social Communications, with whom I have enjoyed so much good company and friendship. He was hospitalized with a serious condition a few days ago."

This is how the whole world found out about the close friendship between the newly elected pope and a polish bishop, Andrzej Maria Deskur (February 29, 1924  – September 3, 2011). The two men met at the end of the World War II in a Krakow seminary. Their lives then went in separate directions: in 1952 Deskur would come to Rome to serve in the Vatican Curia, where he distinguished himself as one of the most important figures and had worked introduced the Catholic Church to the world of mass media. Following his stroke in 1978, he was permanently bound to a wheelchair.

We can also learn just who cardinal Deskur was for John Paul II through a letter the pope sent him on his 80th birthday. We read: "On the day you are thanking God for your 80 years of life, I join you in my prayers of gratitude for all the goodness we have experience together by way of God’s Grace. I also personally thank you, above all, for the last 25 years in which you have accompanied my ministry to the Chair of Peter in a unique way: through the sacrifice of your suffering endured in silent devotion to Christ and His Mother, in persevering prayer and in a spirit of love for the Church, and through your sincere friendship and brotherly advice (...)."

Not everyone knows that Deskur played an important role in the relationship between John Paul II and another mystical saint of the 20th century: Padre Pio. We discussed this with Stefano Campanella, a prolific writer and director of Padre Pio TV.

Mr. Campanella, can you tell us why we are able speak about a “special” relationship that existed between Karol Wojtyla and Padre Pio? Do you know much about letters that the pope had written to Padre Pio?
Yes, Wojtyla met Padre Pio personally. The Polish prelate wrote him at least three letters. The letters regard two miracles obtained through the intercession of the Capuchin friar: the healing of Dr. Wanda Poltawska, a psychiatrist, and that of a lawyer's son. Both were from Krakow.

What role did cardinal Deskur play in the relations between John Paul II and Padre Pio?
On January 30, 2004 I had the honor of interviewing cardinal Deskur in his Vatican's apartment on the relationship between John Paul II and Padre Pio. The cardinal had directly witnessed some events that deeply connected the pope and the friar. He is also a person who was able to gather other facts in terms of conversations with John Paul II, because he was linked to John Paull II by a deep and long friendship that began in a seminary in Krakow. Deskur told me that Wojtyla's seminary companions realized they were dealing with a special young man. They discovered, in fact, that he had the gift of "infused prayer". He said, "During holy hour everyone turned around, looked at who was coming and going. He was the only one who never flinched." Deskur also revealed that Wojtyla had always been "very reserved about everything concerning his spiritual life."

After seminary, Deskur and Wojtyla's lives went in separate directions?
Yes, but they met again while attending the Second Vatican Council. Deskur, who had been called to serve the Holy See back in 1952 as undersecretary for the Pontifical Commission for Cinematography, Radio and Television, was assigned a Vatican apartment where he occasionally hosted his friend, the then-Archbishop of Krakow. One night, by chance, Deskur found the future pope in the room he used as a chapel. He was lying on the ground in front of the tabernacle with his arms stretched out in the shape of a cross while deeply immersed in prayer. This way of placing himself in deep dialogue with the Lord, which continued even after his election to the papacy. Those who read the positio for the Cause of Beatification and Canonization of John Paul II also reported that at least two witnesses said they saw the pope engaged in such intense personal prayer that it seemed like he was conversing with some invisible person in front of him – one time inside the Vatican Gardens and another in front of the Black Madonna of Czestochowa.

The first episode that links Wojtyla, Padre Pio and Deskur dates back to the period of the Council, right? Yes, because it was in November of 1962, while in Rome, that Wojtyla heard that his spiritual daughter and friend, Wanda Poltawska, fell seriously ill. Then Wojtyla remembered Padre Pio, whom he had already met in 1948. He thought of asking him to pray for the woman, the mother of four daughters. It was Deskur himself who facilitated his correspondence with Padre Pio. On November 17, 1962 Wojtyla wrote a first letter, which Deskur sent to San Giovanni Rotondo, with the help of his Secretariat of State, Angelo Battisti, who it turns out received spiritual direction from Padre Pio. Battisti delivered the letter to Padre Pio, who, after having read it, pronounced the now famous words: "You can't say no to this." A few days later, before her scheduled surgery to eliminate an abnormal growth of tissue, the woman underwent a new diagnostic examination which showed that the tumor had completely disappeared. This news immediately reached Wojtyla who felt obliged to thank Padre Pio. Hence, on November 28, 1962 he wrote a second letter which, again through Deskur and Battisti’s assistance, got delivered personally to Padre Pio. On that occasion the Padre Pio said: "Praise be to God!” And then he gave both letters back to Battisti, telling him to "keep these letters." The Vatican clerk put them in a drawer. And he found them by chance in the same month and in the same that Wojtyla would become Pope John Paul II.

There is yet another story?
Yes. In the fall of 1974, the former cardinal Wojtyla was back in Rome. Since the anniversary of his priestly ordination was fast approaching (November 1, 1946), he decided to commemorate the event in San Giovanni Rotondo and celebrate Mass next to Padre Pio's tomb. Deskur, who often organized cardinal Wojtyla's trips to Italy and accompanied him, organized the trip to Puglia with the help Pietro Gasparri, who was one of the directors of the “House for the Relief for the Suffering.”
Due to a series of unexpected events (November 1 was particularly rainy) the group made up of Wojtyla, Deskur and six other Polish priests was quite delayed. They didn’t get to San Giovanni Rotondo until around 9 p.m. Unfortunately, Wojtyla could not fulfill his wish to celebrate Mass at Padre Pio's tomb on the anniversary of his priestly ordination. So he did it the next day, staying in San Giovanni Rotondo until the morning of November 3, and then making an excursion to Monte Sant'Angelo.

So it seems, thanks to cardinal Deskur, that we are able to discover many extraordinary facts about John Paul II and his relationship with Padre Pio.
Deskur told me only part of what he knew because, as he explained to me, "other things I found out about in the confessional but I cannot talk about them." Anyway, among the things, he told me there were some very meaningful stories. One day the Polish bishop Jozef Michalik asked the pope to tell him something more about his relationship with Padre Pio. John Paul II told him about a special relationship they had struck right from the start. When the young Fr. Karol Wojtyla went to San Giovanni Rotondo in the beginning of April 1948, the Capuchin friar revealed to him what he had not confided and would never again confide to anyone, not even to his confessors. The secret was, namely, that in addition to the five wounds of stigmata and transverberation  ("piercing of the heart") , he also had a sixth wound on his shoulder, like the one Jesus gained by carrying the cross, the one that was caused by the patibulum (cross bar) on his way up to Calvary. It was the wound, he said, that " hurt the most" because it was "spewing puss", since it had never "been treated by physicians."
Back then I refused to write more about this. But when John Paul II was beatified, I felt free to publish other intimate details. The first, which I have already mentioned, was John Paul II’s gift of infused prayer. The other concerns Our Lady of Fatima. In 1997, Deskur went to Coimbra, Portugal at the urging of John Paul II to meet Sr. Lucia in order to ask her if the1984 act of entrustment and consecration to Mary, made together bishops all over world, had been done according to Our Lady's wishes. At the end of the interview, after gaining her full confidence, Deskur asked the nun if he should "report something to the Holy Father" on behalf of Our Lady. Sr. Lucia replied: "No need, because Our Lady already speaks to him directly.” And this is just more proof of John Paul II's mystical character.