If Ocasio-Cortez hurls abuse at the patron saint of lepers...

Alexandria Ocasio-Cortez has lashed out against a statue of St. Damien de Veuster, while referring to him as an example of "white supremacism." In reality, the great Belgian missionary went as a volunteer among lepers in Hawaii. And, after 16 years of charitable service, he himself died of leprosy. The words of this rising star among American Democrats confirm that Christianity is under attack. 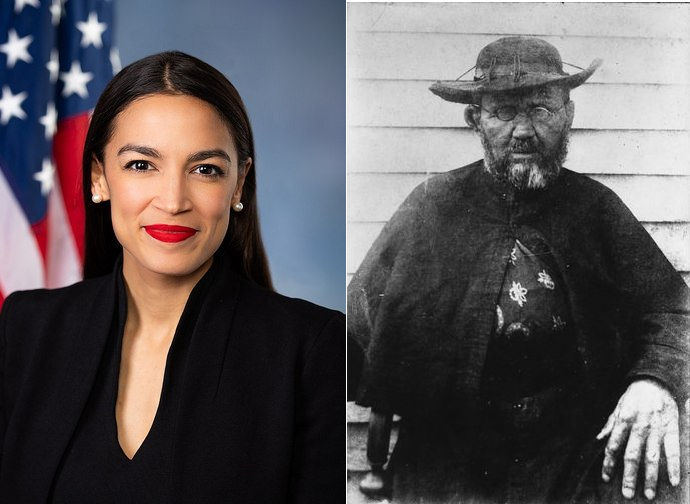 The iconoclast saga, initiated by the Black Lives Matter protests, has added an interesting new chapter. The young congressional representative Alexandria Ocasio-Cortez, champion of the (self-styled) anti-racist movement and rising star within the Democratic Party, has released a video on Instagram in which she branded St. Damien de Veuster (1840-1889), a Belgian missionary in the Hawaiian archipelago, as a "colonizer." She added that the presence of the statue of Father Damien in the Statues Hall on Capitol Hill in Washington is an example of "white supremacist patriarchy and culture."

Now, beyond the boring reuse of the words "white supremacism", all we have to know is a little of St. Damien's life to understand that the basis of statements like those of Ocasio-Cortez follows from  bad faith and/or ignorance. The first reason is self-explanatory, so it is good to dwell on the second, as several American Catholics have promptly done, including the auxiliary bishop of Los Angeles, Robert Barron. It was Barron who, in a couple of videos, recounted the history of St. Damien: a priest who volunteered in Molokai, while living and serving for the rest of his earthly life among lepers. So was he a "supremacist"? Yes, a supremacist of... charity.

A religious priest of the Congregation of the Sacred Hearts of Jesus and Mary, Damien landed in Honolulu in 1864 and was ordained a priest in the Cathedral of Our Lady of Peace that same year. In 1873, he asked Bishop Louis Maigret to go to Molokai, an island in Hawaii (never a Belgian colony), where for many years - by decree of King Kamehameha V and the Hawaiian Parliament - leprosy sufferers were sent and confined. He arrived on the “ghetto-island” on 10 May, the day on which the Church celebrates (making an exception to the 'rule' of dies natalis) his feast day. He was accompanied by Bishop Maigret himself, who introduced the Belgian missionary to the lepers by telling them that he would be "one who will be your father, one who loves you so much that he does not hesitate to become one of you; to live and die with you." His words turned out to be prophetic.

Damien remained in Molokai for 16 years, until his death on 15 April 1889, a holiday in Hawaii. He had found Malokai in terrible conditions, with a total lack of care, with the sick completely abandoned and dead left without burials. He took care of the spiritual and material needs of the lepers, making them understand their dignity as children of God, with the intention of "becoming a leper among lepers in order to earn all of them for Jesus Christ", as he wrote to his brother a few months after his arrival on the island.

The results were extraordinary. "Six chapels were built by 1875. He built a house for boys and then a house for girls. He bandaged wounds, made coffins, dug tombs, heard confessions, and celebrated Mass every morning," a biographical note reads in the Architect of the Capitol. He also taught and helped build roads, schools, hospitals, orphanages and farms.

By the end of 1884. he noticed he had developed leprosy, but this did not diminish his commitment which continued - with the support of four people who came to his aid, including Mother Marianna Cope, also a saint – until 1889 when he died at age 49. Every leper in Molokai, who already considered him a living saint, attended his funeral.

You don't even need to be Catholic to recognize the heroic nature of St. Damien’s virtues. Robert Louis Stevenson, the famous writer and admitted atheist, arrived in Molokai shortly after his death and spent eight days there. He observed with his own eyes and spoke with the island’s residents - of different faiths - to learn the details of the missionary's work. He then wrote a long open letter, published in a newspaper and polemically addressed to the Presbyterian Charles McEwen Hyde (who in a private letter to a friend, made public without his knowledge, had criticised the missionary),  praising Damien. Stevenson wrote that, certainly, one day he would be proclaimed a saint. A century later, Gandhi pointed to Damien as a source of inspiration. Recently, in 2005, two different surveys were conducted between the French-speaking and Flemish communities in Belgium  (one of the most secularized countries in the world). It ranked the missionary third and first among the greatest Belgians ever. Even Ocasio-Cortez's best-known party colleague, Barack Obama, a native of Honolulu, expressed his esteem for the saint in October 2009 at the time of his canonization.

Ocasio-Cortez’s words are, thus, a sign that extreme public aversion to Christianity is taking root, as has happened often since the coming of Our Lord. Following indignant reactions, the congresswoman’s office has partly corrected her mudslinging but without issuing an apology. The note states that Damien did works of "great good", but wonders why that statue represents a non-Hawaiian (strange for a party that is so pro-immigration) and why there is the under-representation of women and blacks, in reference to a new class struggle the left today has re-launched.

Following the iconoclasm invoked and used against St. Junípero Serra and even against the statues of Jesus and Mary, and after the desecrations and churches burned in the United States and the rest of the world, this latest instance confirms that there is a denial of history by political-cultural elites and movements which (behind an apparent demand for "justice" and "equality") are essentially anti-Christian. If they were really interested in “the least of these”, they would evangelize. Instead they fight against the truth. "The truth will set you free," as Jesus taught us. Here, instead, we have examples of destruction and lies, and we know - from the Scriptures - who the prince is.