Hurrah for Biden the Catholic: now the Church accepts abortion

Upon the American Catholic bishops sending a note of congratulations to abortion advocate Joe Biden, the Church now accepts abortion. One’s position for or against life is no longer a criterion for evaluating political behaviour. In short: abortion is no longer an issue for the Catholic Church. Today, we must sadly take note of this. Whoever has lived through the era of John Paul II, Evangelium Vitae and the battle against the "culture of death" will definitely feel a chill run down their spine. 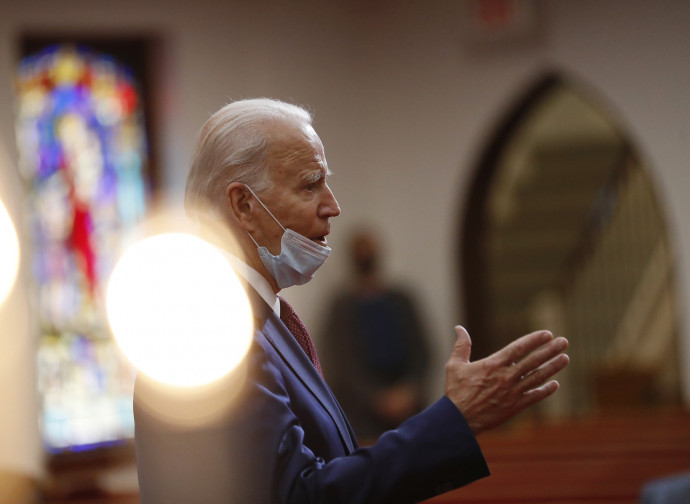 The American elections have made it clear that the Catholic Church now accepts abortion, considers it normal for a Catholic politician to include it in their agenda and believes that the position for or against life is no longer a criterion for evaluating behaviour, including political behaviour. Abortion is no longer an issue for the Catholic Church. Today, we must sadly take note of this, just as we had to do recently regarding the legal recognition of homosexual couples. The last barriers of defence are now being broken down from within.

Naturally, there is no official document from the pope or bishops stating that abortion is morally and politically licit. Of course there isn’t one... But in the case of the American elections, the Church's indifference to abortion has been made official. Abortion, therefore, becomes an irrelevant issue, undeserving of any moral and political condemnation. U.S. presidential candidate Joe Biden has expressly stated time and again that he is in favor of a woman’s right to abortion until the ninth month of pregnancy and the right of children to freely decide their sexual identity. During the election campaign, therefore, without doubt it was Biden who was the pro-abortion rights candidate who even wanted to expand them. Biden was also the candidate in favour of gender theory, and not just as an abstract ideology or some make-believe hypothesis, but as part of a veritable set of rights to be protected by the state. For presidential candidate Biden, Catholicism and abortion are not at odds with each other.

Clarifying any confusion was Biden's selection of Kamala Harris as the vice-presidential candidate. Harris is a former Attorney General and her legal career is clear evidence of her desire to fight against pro-life culture in the United States, and by any means necessary. Hence, not only Biden, but the full electoral ticket, had an unmistakable identity.

Already back in 2008, when Obama chose Biden as his vice-presidential running mate, the then-Archbishop of Denver, Franciscan friar Charles Joseph Chaput, said that advocating abortion was a grave political error. Chaput said he was convinced that any politician guilty of this, like Biden, should not be given Holy Communion. During the recent election campaign, Cardinal Raymond Burke readdressed this subject again, reiterating the same argument that pro-abortion politicians should not receive the Eucharist.

Despite this, we witnessed the Catholic Church helping to back Biden throughout the presidential election campaign. It was not just the American Catholic Church that supported Biden, but the Vatican as well. Even the famous documentary Francesco was full of political judgments in Biden’s favor. But the most disarming support came via a congratulating the Democratic candidate on his victory (even though it is not yet final and certified). José H. Gomez, Archbishop of Los Angeles and president of the U.S. Conference of Bishops, in the note made reference to Biden’s Catholic faith, linking him back to John F. Kennedy, the first Catholic American president.

The bishops, therefore, recognized Biden's Catholicism, while ignoring any contradiction there is with his moral and political positions against life. They confirmed him as Catholic, despite any of his potential abortion policies. The American bishops, in so doing, argue that it is possible to be Catholic and finance Planned Parenthood which sells aborted foetuses (as became well known in a lawsuit when Attorney General Harris did all she could to protect the global abortion organization). The bishops certainly did not say that abortion is good, but they proudly underscored the Catholicism of a politician who makes abortion the centrepiece of his political agenda. They testify to the compatibility of the Catholic faith and abortion; thus, for them abortion is acceptable, it is a good thing. Or in the very least, the American bishops are saying abortion makes no difference to them, that it doesn’t matter whether or not it is part of any political platform. It is as if nothing could deny the Catholicism of anyone who embraces such an agenda.

Archbishop Gomez's brief statement contains only one very general final reference to the question of life, which has always been of primary importance to any political platform. Gomez says he is happy Joe Biden is Catholic, but  does not mention what this means in politics. He congratulates Vice President Kamala Harris, while stressing she will be the first woman to hold this office, as if this were in itself some sign of merit, despite extensive evidence of her fight against life in the womb. Gomez's note appeals to the common good which is impossible to pursue together with a president in favour of abortion, yet Gomez still considers it possible. Finally, Gomez expresses hope for national unity. Yet unity is made possible by good ends sought together: if a political candidate proposes evil within his platform, a certain and irrevocable evil such as the legalised killing of innocent life, then he cannot promote any true unity.

The United States Bishops’ Conference note issued by its president formalizes the acceptance of abortion, now a part of everyday Catholic life. Whoever has lived through the era of John Paul II, Evangelium Vitae, and the battle against the "culture of death" will certainly feel a chill run down their spine.