He had decided to go deer hunting, his great passion, rather than go to church for the Good Friday services. At that point, he had no idea what was about to happen to him. Or that he would become St Hubert, the first bishop of Liège. 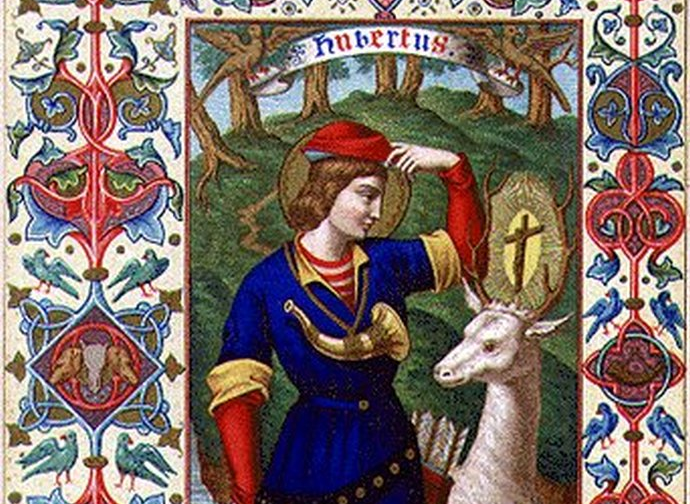 The young man inhales the pungent air of that March morning in 680 AD, filling his lungs, while he tightens his horse’s reins, made of precious leather with silver studs. He is trotting out of the city and looking down on the world. He smiles as he sees the crowd heading towards the church. They are all dressed in their Sunday best, with a fitting demeanour, only today is Friday. The man feels sorry for them, as they are going to have to listen to the priest's boring words for two hours, while he is going to spend a beautiful morning hunting deer. He feels privileged to be able to hunt the deer. In fact, it is the preserve of the nobility, whose members are trained in this type of hunting, which requires special talents. And he is an excellent hunter, not least because he spends most of his time hunting which gives him considerable experience in the field.

From a noble family (he was born around 656, the eldest son of Duke Bertrand of Aquitaine), Hubert (this is the young man's name) had spent his youth in Metz, as count palatine at the court of King Theodoric III (651-691), King of Austrasia (so King of all the Franks). Here it is worth opening a parenthesis to talk a little about Theodoric, who, together with Clotarius III and Clovis III, are considered by History to be 'the idle kings', i.e. manipulated by their mayors of the palace. 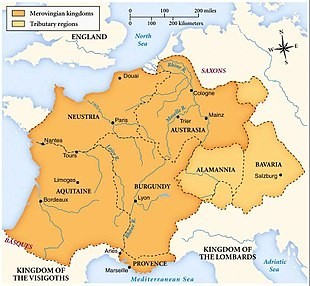 The “Mayor of the Palace” (Latin: maior palatii) or “Majordomo” (maior domus), in Merovingian and later Carolingian Gall, was the official who supervised the royal palace, at that time the real administrative heart of the kingdom. Well, poor Theodoric was overthrown by his mayor of the palace, Ebroinus. Not liking the king's allies, he caused them to scatter far and wide. This is the reason why our Hubert left Metz and moved to the court of Pippin of Herstal (640-714), Mayor of the Palace of Austrasia: this was a territory which formed the north-eastern part of the Merovingian kingdom of the Franks between the 6th and 8th centuries. The kingdom extended to the north-east (hence the name Ostreich or Eastern Kingdom), as far as the border with the Saxons, on the banks of the Rhine River. So, welcomed by Pippin of Herstal, Hubert led an idle life, devoting himself to his main passion, hunting.

Let us return to that day when we see him on horseback, looking forward to the pleasure of hunting. Hubert had left the city behind him and was now entering the dense forest, so familiar to him. He takes in the scent of the land, the shrubs sprouting leaves and buds, and the birdsong which give him an intense feeling of well-being. He smiled and raised his head to sense which way the wind was blowing: for deer hunting, the hunter had to be upwind and he strictly followed this rule, which was one of the main reasons for his success in deer hunting. He arrived at the edge of a clearing and dismounted there. The horse moved away a little. Hubert boasted that he had trained his horse to stay behind him, against the wind, and in silence. He positioned himself behind a thick juniper bush (he preferred this plant, an evergreen), knelt with one knee on the ground and held up his bow and razor-sharp arrow, ready to shoot. He could smell the scent of the juniper bush and felt an inexplicable excitement.

He did not have to wait long; soon a deer appeared in the clearing and started to cross it. Hubert waited patiently: he wanted the animal to turn around so that he could shoot it in the forehead: in this way it would die instantly. Only then would the hide remain intact, the meat exquisite, and the antlers undamaged. An arrow in the side of the animal would kill it eventually, but it would run for a long time with the arrow in its side: the toxins would invade its body, making the meat tough, and the hide would have a hole in the most valuable part. In addition, the deer could spoil its antlers in an attempt to free itself from the arrow.

A few moments later the deer turned and looked the incredulous Hubert straight in the eye. Between its majestic antlers the deer held a golden crucifix, studded with stones. It looked at him and from its large eyes a tear ran down the fine fur that covered its quivering muzzle. Hubert as if hypnotised, had his finger bent over the arrow, and a pain in his outstretched arm that held the bow. He had the impression of reading the deer's eyes and seeing Creation in all its splendour. The complexity of the animal, the details of its body, and the strength it gave off made him feel insignificant, helpless and unworthy of such beauty. He slowly lowered his arm, dropped his bow and arrow and stood up. He whispered, asking for forgiveness from the deer (which in Christian iconography is a symbol of Christ overcoming the devil). The animal turned and with two leaps disappeared from the man's view. Hubert remained motionless for quite a while. His heart was beating wildly, his brow beaded with a light cold sweat, and his whole body ached. He was overcome by a feeling of nausea, which turned into exaltation: he knew what he had to do.

So, on that March morning - it was Good Friday - his life changed forever. When he returned to his palace, he astonished everyone by deciding to renounce all his possessions and his title in favour of his younger brother Odo, who thus became Duke of Aquitaine and Gascony. That was not all: Hubert decided to become a priest. He placed himself under the spiritual direction of Lambert, Bishop of Maastricht, studied theology, and was ordained a priest.

His preaching made him famous: people came from all over to hear him. He became Lambert's main assistant. Lambert was killed in 706, by order of Pepin of Herstal (thus becoming a martyr and a saint). Hubert succeeded him and founded the diocese of Liège, of which he became the first bishop. He also had Lambert's body moved to the cathedral he had built in his new episcopal see. Hubert accomplished a great mission of evangelisation of the eastern parts of Belgium (Brabant, Ardennes) with his preaching. 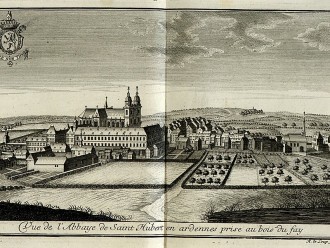 But soon fate was lurking: while fishing in a boat on the Meuse River, Hubert had a serious accident that left him with injuries. An infection invaded his body, but he survived for just over a year. He was buried in Liège in the Church of St Peter. In 825 his mortal remains were transferred to the Ardennes, to the abbey of Andage. The Huguenots destroyed his relics in 1568.

In the Middle Ages, his veneration as a saint was widespread: he was invoked against dog bites, but also against rabies. His tomb was the destination of numerous pilgrimages by people from the four corners of the world. St Hubert is the patron saint of hunters, archers, butchers, furriers, turners, opticians, metalworkers, founders, mathematicians, and hunting dogs. He is celebrated on 3 November, the day of the transfer of his relics.

His story tells us about the revelation of things hidden to human view that is sometimes superficial towards essential things. But it is also about redemption, and the ability of human beings to improve and change their lives when they least expect it.