How WHO and Bill Gates are taking control of our health

What lies behind making vaccination the priority? A mammoth operation of power and public and private funding which, in collaboration with the WHO (World Health Organization) the World Bank and Gavi, has received support from the wealthy elites such as Bill Gates. The Daily Compass interviewed Pier Francesco Belli, an expert in health governance, who said: "The European Union 'ceded' political control of epidemics and infectious diseases to the WHO, which is bankrolled by Gates and favours specific emergency procedures. Gates knew that making a GMO (Genetically Modified Organism) vaccine would take very little time, unlike traditional vaccinations. Teaming up with biotech companies to create a vaccine implied a whole new enterprise for pharmaceutical companies. This is exactly what happened." 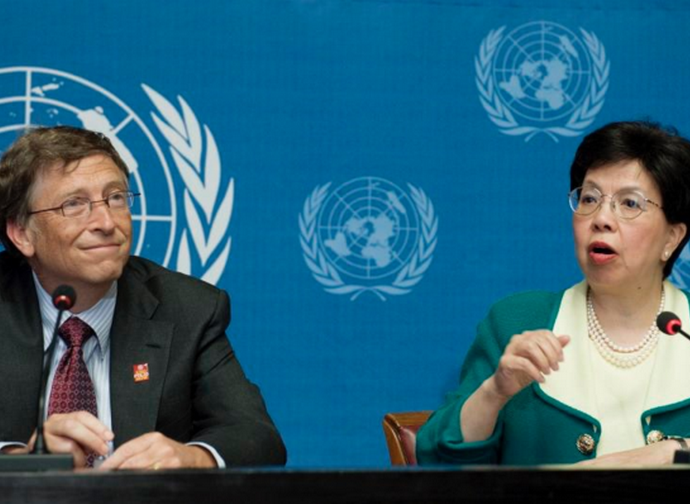 Vaccines are here, there, and everywhere. Never mind their adverse, often deadly side effects. Nor does it matter very much that we have no meaningful data on their efficacy, safety and durability. It hardly matters that they are unable to prevent getting infected and  the spread of contagion. Neither does it seem to matter much that Covid-19 can be cured in other ways or that the vast majority of people thought to be infected actually have mild symptoms or none at all. Why are we witnessing now a new form of "therapeutic overkill?" To answer this, we asked Prof. Pier Francesco Belli, an expert in health governance and Chairman of the INCER Institute's Commission on Health Risks and Ethics.

Prof. Belli, to better understand what is happening now in terms of managing the Covid pandemic, how far back in time do we need to go?

Let's start in 1998, when via Decision no. 2119, the European Union required its member states to coordinate with the WHO for the management of infectious diseases and epidemiological monitoring. At the same time, national epidemiological and prevention centres responsible for monitoring outbreaks were gradually dismantled, while dozens of coalitions, committees, and organisations sprang up in their place.  All of these became 'global institutions’ and included people from the Bill & Melinda Gates Foundation, the WHO, and managers of world-class public health centres for vaccination and disease control. Furthermore, all these were linked to local WHO partner centres. In Italy alone there are 29 WHO partner sites (one is at Rome’s Spallanzani Hospital, which serves as the National Institute for Infectious Diseases).

So why is this a problem?

Because, as we shall see, these centres respond more and more to the dictates of NGOs than to the Ministry of Health’s Centre for Disease Control and Prevention, which by now has effectively lost its mission of managing communicable diseases and health emergencies.

Can you tell us more about the situation in 1998?

In that year, at the Rockefeller Foundation Centre in Bellagio, the World Bank, the WHO, Bill Gates and UNICEF all met for [firming up] the Gavi-Alliance. This was none other than one of these global partnerships for pushing immunisation through vaccination programmes. Gavi has thereby become the new guarantor of infectious and communicable diseases, with the member countries simply serving to finance the alliance. It must be understood that the WHO was previously funded by [a percentage of] GDP of individual countries. However, when the global stock markets crashed in 2008, weakening the various allied countries, many of them reduced their WHO funding. It was at this point that Bill Gates stepped in, either directly through his foundation or indirectly through Gavi (which he funded). Gates thus became a major WHO financier, but with "earmarked" intentions.

What do you mean by “earmarked”?

I mean for "restricted giving" purposes. It is a money management restriction: I give you this money for this specific purpose. So, in this way, Gates controls the WHO, which then controls the monitoring networks of countries. And for what particular agenda? That government money is no longer directed towards primary prevention, but towards vaccines (secondary prevention).

In practice, does this mean global organisations decide the lines of prevention in the various countries, bypassing their internal authority or strongly conditioning it?

Exactly. Consider, for example, the Global Virome Project (GVP), an international organisation established in 2016, once again at the Rockefeller Foundation in Bellagio. Sitting on the board of this organisation is Dr. Jennifer Gardy, who is director of the department of data surveillance and epidemiology at the Bill & Melinda Gates Foundation's malaria team. And she is not alone. Now, the GVP is committed to identifying 99% of unknown viruses of animal origin which have the potential to become epidemics so as to better respond to future pandemics and facilitate countermeasures such as vaccines through the use of revolutionary technologies. Basically, they control the taxonomy of viruses and they are in charge of everything. They are so expert that folks would believe them if they were to say Christ died in his sleep! These are massive organisations, global coalitions. They distort the institutional duties of sovereign nations in terms of the prevention of transmissible infectious diseases and epidemiological oversight. They accumulate power and [control over] public and private financing which, in partnership with the WHO and Gavi, is used to shift the focus of prevention decisively towards vaccinations.

Is this where the devising of emergency procedures played an enormous role?

The EUL (European Union[1]  ) emergency procedure was devised by the WHO after 2015, in the wake of the Ebola outbreak. The European procedure, designed on the basis of WHO guidelines, is called CMA (Conditional Marketing Authorisation). But one has to understand the context: pharmaceutical companies had been plummeting on stock markets for a few years. Bill Gates then began to scoop up biotech start-up shares all over the world; practically, all of them were  GMO manufacturers. What was the huge advantage? In light of the emergency procedure, Gates knew that making a GMO vaccine would take very little time, unlike what it takes of traditional ones. Teaming up with biotech companies to create a vaccine would mean whole new enterprise for pharmaceutical companies. Interestingly, Germany became a partner in major national biotech companies such as BioNTech and CureVac, where of course Bill Gates (through Gavi) was also involved, with roughly $745M directly financing the development of GMO-based vaccines. Merkel had thus facilitated the inclusion and implementation of the CMA emergency procedure.

What does this procedure involve?

It treats us as if we were all terminally ill, because the temporary authorisation for one year (renewable) is given for ‘compassionate use'. With this authorisation, experimental vaccines may be used, without the manufacturer having to provide any risk assessment, even after its release on the market. What is more, these are GMO vaccines, despite the fact that GMOs are banned in Europe. The vaccines made by Moderna and Pfizer-BioNTech (BioNTech is a GMO start-up) are for all intents and purposes GMO vaccines. Gates, by the way, also wields power at Pfizer, which he has funded with more than $17 million in grants given in September 2016 (see here).

Are you saying, the European Parliament had to depart from GMOS rules in order to greenlight these vaccines (see here)?  This rationale of ‘compassionate use’ is unbelievable.

Yes, it's madness. A young man aged 35, who is athletic, who is in perfect health, from this perspective is already a potentially dead or terminally ill. Therefore, he must take the vaccine. I would like point out that from 2011 to 2014 the Bill & Melinda Gates Foundation funded Italy's Superior Institute of Health to the tune of more than $2M to produce new vaccine techniques, including the GMO enzyme Luciferase in full violation of relevant legislation. It is clear that the ultimate aim of the WHO has been to apply the EUL procedure with the aim of making available unlicensed, unchecked GMO vaccines. These are vaccines that are not present in the European Pharmacopoeia (the pharmaceutical code for quality control of drugs) and that will still be authorised as long as the WHO itself, where Bill Gates' influence is decisive, decides to maintain the current state of emergency and with the endorsement of European norms.