How Blessed Franz succeeded in remaining faithful to the Truth

Franz Jägerstätter, beatified in 2007, knowing that Nazism was incompatible with Catholicism, refused the oath to the Führer, government allowances for his family, and compensation from the state. His popularity with his neighbors in his village changed into hostility against him; everyone turned against him, even his parish priest and his bishop. He had only the Bible and his wife to support him, even though she knew that the farm would fall apart and that she and their daughters would be branded forever as the family of a traitor. 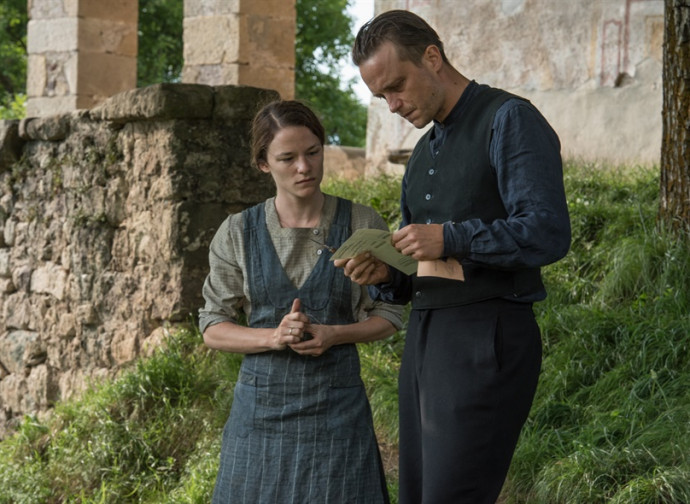 A Hidden Life is the latest film by Terrence Malick, a director of cult who is so perfect and sought after that he produces an average of one film every ten years. Although he is not a believer, this time he wanted to try his hand at depicting a Christian, Franz Jägerstätter, whom the Catholic Church has beatified. He is famous as a martyr of Nazism, executed for his refusal to swear the oath of fidelity to Hitler.

In the first place we note how unusual it is that a Hollywood director has chosen to make a film that, instead of focusing on the Holocaust for the billionth time, recalls that Nazism also had other victims. It is still a film about the “silence of God,” but it seems like a sort of response to Martin Scorsese’s Silence: there two Jesuits apostatise from the faith under pressure in Japan in the 17th century, whereas here a peasant father of a family chooses not to submit. And then we come to the protagonist, whom the director undervalues in order to concentrate on his interior dilemma (so that the viewer can remain uncertain whether he is a fanatic or a saint).

He is Austrian, born in the country village of Sankt Radegund in 1907 to a teenage mother. He worked as a farmer in Bavaria and as a miner in Styria. In 1933 he returned to his hometown and was known for his cheerful bravado and his love for brawls and revelry. He was handsome, spirited, and courted by the ladies which results with a servant girl becoming pregnant. Two years later, he met the love of his life, Franziska, who married him and helps him put his life in order. Franziska was devoted to prayer, and under her influence Franz began to read the Bible each day. In short, he became fervent in his faith and became the sacristan at his parish church. Franziska gave him three daughters, one after the other.

Franz was transfigured; the discovery of the faith gave him a joy that he had never had before, his farming goes well, and his family was paradise for him. But it was too good to last. With the Anschluss in 1938, Austria came under the control of Hitler’s Germany. Franz, who was well-informed, knew that Nazism was incompatible with Catholicism, and he began to act accordingly: he declined the offer to become the Burgermeister, refused the family allowances and even the government compensation he was offered to make repairs after a hailstorm. Little by little the popularity he enjoyed in his native place turned into distinct hostility. The people condemned him as a fanatic, as being obsessed, a troublemaker who would only end up drawing the regime’s malicious attention to Sankt Radegund.

His wife also suffered from being ostracized, and even their little daughters: none of the other children wanted to play with them any more. Everyone turned against him; even the parish priest told him to give up, and even the bishop of Linz. Everyone except his wife, who was the one responsible for his conversion. The situation made Franziska feel desperate, but through her tears she remained at her husband’s side and encouraged him to persevere in doing what he thought was right. She knew well that without him their farm would fall apart and that she and their daughters would be branded forever as the family of a traitor. But even if she did not completely understand his decision, she sided with him. In fact everyone  should be envious of having such a wife – what an enormous grace!

At this point everything becomes worse: Germany wars against the whole world and Franz was called to serve in the army. Franz, who did not want to contribute to Hitler’s conquests, presented himself for service, but when he was asked to swear the personal oath of fidelity to Hitler, he refused. Prisons, tortures, and interrogations followed, but he would not yield. In order not to create an embarrassing precedent, they offered him the possibility of serving in the medical corp. But he had the same question: Do I still have to swear fidelity to Hitler? When he was told he did, he replied that then he would not serve. They sent him to Berlin to appear before a tribunal of the Reich as a resister and, even worse, as a dissident. Those who visited him, even his lawyer, tried to persuade him with moral blackmail: why don’t you think of your children? Why can’t you just pretend to swear? The penalty is death, and you will leave your family to starve and be branded as traitors forever. Are you sure that your position is not just a result of your pride, which you are confusing with adhering to your religious faith?

But as he read the Bible daily, he considered the story of Eleazar, the elderly Jewish man who refused to eat pork during the time of the persecution of Antiochus: he too had it suggested to him that he should pretend to eat pork in order to save his life, but he thought of the bad example he would thereby give to young people if he yielded. The death penalty in the Reich was administered by guillotine, a holdover from the Napoleonic occupation of Germany. Franz Jägerstätter offered his neck on August 9, 1943 in the Brandenburg district of Berlin. He was beatified in 2007 for his martyrdom suffered in hatred for the faith. Franz was a Third Order Franciscan and he had even performed good military service in the Austrian army. But at the hour of the referendum on the union of Austria with Germany he was the only one in the entire district of Sankt Radegund who voted no. No to pagan Nazism, and, later, no to the war it set off.

Malick’s film is three hours long and bears the unmistakable style of its director, which leads the viewer to ask what would lead a young man whose life is completely happy to risk everything in the name of loyalty to a principle. Many scenes are dedicated to depicting the torment of a believer who, like the biblical Job, is surrounded by “consolers” who urge him to give in, blaming him for his stubbornness and for his insensitivity to his wife and daughters, whose fate would be bitter because of his choice. In the film, the famous German actor Bruno Ganz, who recently passed away, appears in a “cameo” playing an old official who is the only one who seems to understand Franz’s dilemma, but in the end, abandons him, albeit reluctantly, to his fate. The depiction is a tribute to the old-fashioned German army officers who did not have any sympathy for Hitler but who obeyed the Fatherland (even if it had ended up in questionable hands).

Much of the dialogue remains in the original language, which increases the film’s pathos. In the parts that are translated, however, there are a few gems like this one of Franz’s sayings that the director puts in the mouth of one of his fellow prisoners: “Dark times will come when men are more intelligent; they will not fight the truth, they will ignore it.” He was not thinking of Nazism, which was dark enough by itself. He was thinking of what would come after.