In Judaism, horse meat is considered “impure”. For Christians, however, the roots of this prohibition go back to the 8th century, when Gregory III, following the victory of Charles Martel in the Battle of Poitiers, banned the consumption of horse meat. His successor, Pope Zacharias, confirmed the ban for reasons related to the pagan sacrifices of the Germans. Traces of this aversion to horse meat remain in many Christian areas. 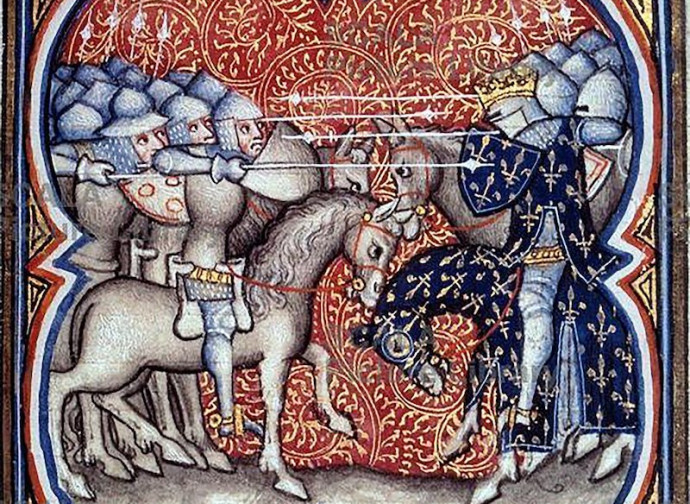 From the point of view of food history, the beginnings of Christianity are closely intertwined with Judaism and its traditions. The first Christians were Jews, so it is understandable that they respected the dietary rules that they grew up with. And for them edible animals were divided into ‘pure’ and ‘impure’. For almost two centuries, ‘impure’ animals were absent from the Christian table, but between the end of the 2nd century and the beginning of the 3rd century A.D., the veto was relaxed and Christians began to eat meats that until then had often been considered ‘illicit’, such as pork. However, two great taboos remained: meat from animals immolated for sacrifices and horse meat.

The early Christian centuries were also a time of mass conversions of pagans to Christianity. They had the habit of animal sacrifices to ask for the mercy of their gods for various aspects of daily life: drought, war, health, misfortune, natural disasters and so on. Among them was the custom of eating the meat of animals sacrificed: in reality it was a ‘business’ of the temples, which sold that meat to the people.

On the subject of meat sacrificed to idols, St Paul says the following in his First Letter to the Corinthians: “... we know that an idol is nothing in the world, and that there is no other God but one”(1 Corinthians 8:4). He then goes on to say:

“All things are lawful for me, but not all things are helpful. All things are lawful for me, but not all things edify. Let no one seek his own, but each one the other’s well-being. Eat whatever is sold in the meat market, asking no questions for the sake of conscience; for the earth is the Lord’s, and all that it contains. If a non-believer invites you to dinner and you want to go, eat whatever is placed before you, asking no question for reasons of conscience. But if anyone should say to you, ‘This was offered to idols’, do not eat it, for the sake of the one who warned you and for the sake of conscience; of conscience, I say, not yours, but the other’s. For what reason, indeed, is this my own? For why should my freedom be subjected to the judgement of another’s conscience? If I partake of the table and give thanks, why should I be reproached for what I give thanks for?” (1 Corinthians 10:23-30).

Sensitive to conversions, Paul exhorts a great openness of spirit concerning food: “Welcome among yourselves those who are weak in faith, without questioning their hesitations. One thinks he can eat anything, but the other, who is weak, eats only vegetables. Let not him who eats despise him who does not eat, and let not him who does not eat judge him who eats; for God has received him”. “I know, and I am persuaded of it in the Lord Jesus, that nothing is unclean in itself; but if anyone holds anything as unclean, it is unclean to him. Now if your brother is disturbed by your food, you are no longer acting charitably. Beware, therefore, of spoiling with your food one for whom Christ died! Let not the good that you enjoy become a cause of blame! For the kingdom of God is not a matter of food or drink, but it is righteousness and peace and joy in the Holy Spirit”. (Romans 14:1-3, 14-17).

We mentioned above that another taboo food is horse meat. For Judaism (and indeed Islam), horse meat is considered an “impure” food. For Christians, however, this prohibition is rooted in history. In the 8th century (732 to be precise), Charles Martel (c. 690 - 741) and his Frankish knights, all on horseback, heroically curtailed Muslim expansionism in the vicinity of the French city of Poitiers. The battle took place in a region between Tours and Poitiers, which is why it is called either the Battle of Poitiers or the Battle of Tours. The overwhelming victory did a great service to the Frankish leader, praised by all as the saviour of Christendom, the ‘hammer that broke the Muslims’ (hence the nickname ‘Martel’, which means ‘Hammer’).Thanks to this victory, Charles Martel opened up a path that led straight to the empire for his family: in fact, Charlemagne, the first emperor of the Holy Roman Empire, crowned in 800, was his grandson.

Returning to the Battle of Poitiers, Matthew Bennett writes in his book “Fighting Techniques of the Medieval World”: “Few battles are remembered 1000 years after they have been fought [...] but the Battle of Tours is an exception [...] Charles Martel turned back a Muslim advance that could have conquered Gaul if it had been allowed to continue”.

Pope Gregory III (Syria, 690 - Rome, 741), grateful to Charles for his victory over the Muslims, observed that quadrupeds proved too valuable to be trivially slaughtered and so he put an end to the consumption of horse meat in an Epistle. Zechariah, who succeeded him on the papal throne, raged even more vehemently against the consumption of horse meat. His real motivation was to discriminate against the German invaders who ate meat immolated for the cult of Odin. The pagan sacrifice thus became the real reason for the food ban.

Also in the 8th century, Saint Boniface (c. 680 - Dokkum, 5 June 754), bishop of Mainz, Anglo-Saxon Benedictine monk, missionary in Hesse and Thuringia, considered the apostle of Germany, was horrified at the sight of the banquets based on horse meat held by the Germans. He did not hesitate to use sermons to convince the local populations to see the nobility and usefulness of the horse and its role in accompanying man in everyday life, thus managing to convince the masses to give up this food. Traces of this aversion to horse meat still remain in many Christian areas, which consider the horse ‘impure’ or ‘abominable’ from a religious point of view, and in this unknowingly agree with Islam and Judaism.

It must be said, however, that the Church reconsidered the consumption of horse meat as ‘licit’ at the time of the Russian retreat (1942-1943), when men exhausted by hunger and cold had no choice but to eat their horses.

Nowadays, there are butchers who specialise in selling horse meat; there are slaughterhouses that slaughter these noble animals and people who eat them. There are parents who feed their young children horse meat, which is considered to be richer in protein than other meats. But let us not forget that in the Middle Ages the horse was a friend and ‘confidant’, an animal capable of living in symbiosis with man. Like the dog, faithful and loyal, the horse should not, in my opinion, be used as food. This is why, once again, there is no recipe to accompany this article. We will make up for this next week, when we will start a new cycle of articles, dedicated to the recipes of the regions of origin of the great saints of the Catholic Church. Until then, let’s try to look at horses from a different perspective: they are a true wonder of nature and not food to be served up on a plate.