Hong Kong: the new law to squash the press 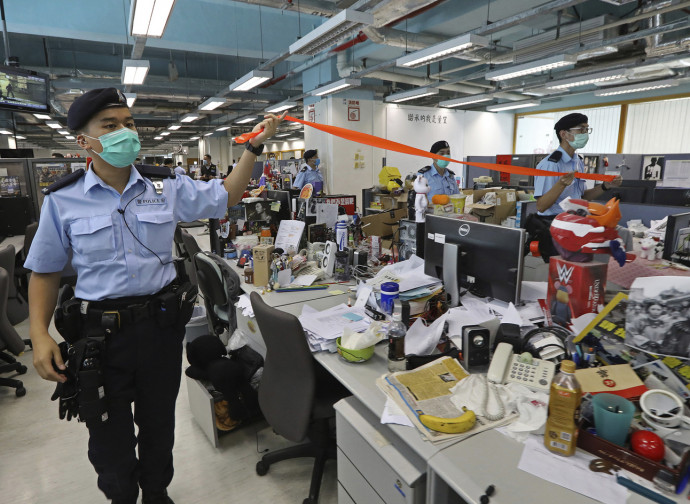 In a spectacular raid, broadcast live on video, a hundred Hong Kong police officers entered the Apple Daily’s headquarters, which has lead the way for the island’s democratic uprisings. The newspaper’s publisher, Catholic entrepreneur Jimmy Lai, was arrested together with his son Ian. Police are still looking for Lai’s other son, Simon, as well as the manager of the Next Digital publishing house, Mark Simon, who broke the news on the raid and the arrests. Lai is being made a prime example of China’s new National Security Act, as imposed by Beijing on the territory of Hong Kong. Thus, Hong Kong police are beginning to follow orders from the Chinese central government.

Chinese authorities accuse Jimmy Lai and his media associates of being Western infiltrators, insubordinates, and enemy propagandists. According to the English language Chinese newspaper (loyal to Beijing), the Global Times, Jimmy Lai's publications serve to "instil hatred, spread rumours, offend the authorities of Hong Kong and the motherland for years." The new Chinese Security Law, in theory, should punish those guilty of "subversion, secession, treason, sedition", but a raid so highly publicized at the headquarters of the principal opposition newspaper is proof that the law will also be used to end freedom of expression and, above all, to lay blows to the key figures of dissent. Lai, the entrepreneur and publisher, had already been arrested three times before yesterday and there are currently four charges were pending against him, mainly for organizing illegal assemblies, during the Umbrella Revolution (2014) and protests against the extradition law of 2019. Now, with the new law, Lai risks imprisonment on the high charge of "collusion with a foreign country."

Lai fled China while seeking refuge in Hong Kong when he was just 12 years old. "I had never seen so much food [laid out] for breakfast as when I arrived in Hong Kong”, he confided in an extensive interview with Robert Sirico, for the Acton Institute, this past June. “From those days on I began to approach the concept of freedom from the concept of abundance of food. Freedom also means not no longer being hungry". Starting from literally nothing, Lai had managed to build up a real retail empire, which he had always understood as "a service for the needs of others." In the past Lai was very optimistic about developments in mainland China. He continued to fly back and forth to China for business until he radically changed his attitude and ideas following the Tiananmen Square massacre of 4 June 1989. From then onward, he began his activism for freedom. In 1990, Lai launched his first newspapers which were an immediate success. He launched them to fill a void: everyone was afraid of the communist regime and even practiced self-censorship so as to avoid offending the Chinese government. According to Lai, his openly anti-communist commitment in the press was, therefore, about "a combination of a passion for freedom and a business opportunity, because nobody dared speak openly about power in China.”

1997 was the year that Hong Kong was given back to China and many people on the island began to be seriously afraid. In that very same year Lai, already an established entrepreneur and publisher, converted to Catholicism. "The greatest influence came from my wife, who prayed every day," he says while recalling his big decision. "In 1997, my conversion seemed completely natural to me, even though I had never thought about it before. I had always fought for freedom, but I had never before conceived my struggle as part of a higher mission. I knew it was right, I hadn't yet realized why.” Lai was already a friend of Cardinal Joseph Zen, then Archbishop of Hong Kong. It was Zen who baptized him.

The story of the Hong Kong entrepreneur and publisher is proof that no one can be safe. After being a VIP chased by paparazzi and tabloid magazines, he has now become a dissident chased by police who have always kept a close watch on his home and intimidated his visitors. Recently, Lai paid a $1000,000 fine the crime of illegal assembly. Now if one is arrested under the new security law, China will impose a ban on travel outside of Hong Kong.

"What the authorities are doing recently is arresting the most prominent dissidents so as to intimidate everyone else to prevent two million people from taking to the streets again," Jimmy Lai explained. Moreover, "The very existence of the new National Security Act alone is frightening people. They are now becoming much more cautious. The most searched for word on Google is emigration. People are looking for ways to emigrate. Fortunately, Boris Johnson has promised to grant at least 3 million passports. It was a great help, at least the Honkongers know that there is a place to go to."

The small territory of Hong Kong, whose population is about one hundredth of that of the People's Republic of China, is nevertheless very dangerous in Xi Jinping's eyes. "We are like an outpost of Western values in China," Lai explained in his interview, "and we can spread these values to the Chinese on the mainland. So far, it has also been the only place where religion has been truly free, where Christians could pray without submitting to "Sinozation" regulations (religion with Chinese characteristics, in other words, communist). Until now. But from now on, the music is also changing for the Church. This is seen in the letter to the Catholic school principals sent by the Diocese of Hong Kong, in which they are asked to teach students the new National Security Act and the new norm for the Chinese national anthem so as to cultivate the "correct values" regarding national identity and to prohibit any "politicization." The repression of thought, therefore, will arrive in Catholic schools, which until now had been at the forefront of the 2019 protest.

All this takes place on the eve of the renewal of the agreement between China and the Vatican, scheduled for the end of September. One wonders in what spirit China will approach the negotiations, as it is clearly violating an international treaty that guaranteed full autonomy to Hong Kong. Furthermore, we will see how it will affect the Vatican’s own dealings with China after having seen how easily Beijing violates such agreements or uses them to its own advantage while trying to transform the Church into another propaganda arm of the Communist Party.