Here's what Obama would have done with today’s riots

“What would Barack Obama have said or done today for the George Floyd crisis to restore order, justice and healing?” This is the question many people have wondered in these days of fierce criticism of President Trump. In fact, a similarly tragic incident took place during Obama's presidency, in 2015 with violent protests in Baltimore. You would be surprised to know that Obama acted quite like Trump but with one big difference: the current Republican president has done much more to help the African American community. 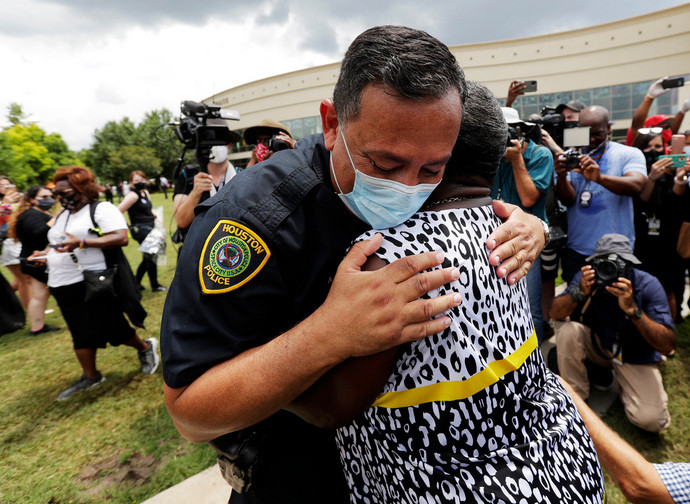 Ever since Donald Trump became President of the United States, Democrats in America have waxed nostalgic about their former White House hero, Barack Obama. They remember Obama as the gentile, rational, inclusive statesman while they vilify Trump as the crass, irrational, “Divider in Chief.”  Perhaps they are not extreme polar opposites for every political agenda?

During America’s ongoing bloody George Floyd protests, Democrats have often yearned for the good old days and wondered, “What would our beloved black ex-president have said or done today to restore order, justice and healing?”

Well, we’ll never really know for sure. Indeed, we cannot put President Obama in a time warp, having him reappear in the trappings of his presidency starting last May 25, when riotous violence and chaos erupted throughout America.

However, it is actually possible to have some indication of how Obama might have reacted were he still sitting in the Oval Office. This is possible, because towards the end of his 8-year term a similarly tragic incident took place. A young black American was likewise killed by brutal police malfeasance. The year was 2015. The man was Freddie Gray, Jr. And the city filled with arson, beatings, murders and looting was Baltimore, just an hour’s drive north of the nation’s capital.

Before we get to how Obama responded to the parallel Freddie Gray crisis, here is a little of the backstory.

On April 12, 2015  a 25-year old man was arrested in a poor district of Baltimore. Municipal police claimed that while patrolling a drug-infested neighbourhood, Gray caught their attention and began running. According to the report signed by arresting officer Garrett Miller, Gray “fled unprovoked upon noticing police presence. The defendant was apprehended …after a brief foot chase. [There was] a knife clipped to the inside of his pants pocket. The defendant was arrested without force or incident. The knife was recovered.”

Eyewitnesses disputed Officer Miller’s report. As we read on National Public Radio, child witness Kevin Moore described Gray as being violently detained and "screaming for his life." Moore said a policeman knelt on Gray's neck while others were bending his legs backward.  "They had him folded up like he was a crab," Moore said. "He was all bent up."
Other witnesses heard Gray say he “couldn’t breathe” and ask for his “asthma pump.” In fact, some of the six officers were criminally indicted for not giving Gray immediate medical attention.

What happened next was the fatal final act. Officers shackled Gray’s hands and feet and made him sit in the back of their van without a seatbelt. On their way to the police precinct, a sudden hard application of the van’s breaks caused Gray to lunge forward out of control and smash his head and back into the metal interior. This provoked a severe spinal cord injury. After a week in coma, Gray passed away. Some had blamed that the alleged kneeling on Gray’s neck had caused him to easily suffer a fatal spinal injury.

All six officers involved in the arrest were charged, yet all were acquitted in court. Curiously three of the six officials indicted were black, including an African American woman: Caesar Goodson Jr., William Porter, and Alicia White (see photo below). 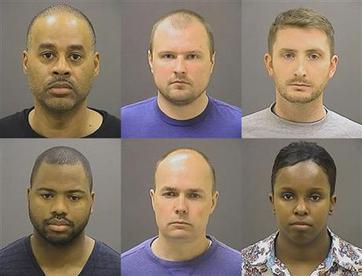 According Gray’s Wikipedia page, a week of widespread civil unrest then ripped through Baltimore:

“On April 25, 2015, a major protest in downtown Baltimore turned violent, resulting in 34 arrests and injuries to 15 police officers. After Gray's funeral on April 27, civil disorder intensified with looting and burning of local businesses and…a drug store, culminating with a state of emergency declaration by Governor Larry Hogan, Maryland National Guard deployment to Baltimore, and the establishment of a curfew.”

Unlike the George Floyd protests, the murderous riots for Freddie Gray’s tragic death were limited to one city and received only a fraction of national and global media attention. Also unlike, Floyd’s death, since the case involved the inhumane treatment by three black officers, the radical left-wing Black Lives Matter and Antifa movements had considerably softened their response across America.

Given the similarities between Minneapolis and Baltimore, how did President Obama respond five years ago?  In an April 28, 2015 White House rose garden press conference, Obama spoke with conviction the night after the Baltimore riots began. What follows is an abbreviated transcription, highlighting some of Obama’s reactions and proposals (see 14-minute  C-SPAN recording)

“First, obviously our thoughts continue to be with the family of Freddie Gray. Understandably, they want answers. And the DOJ [Department of Justice] has opened an investigation. Second, my thoughts are with the police officers who were injured in last night’s disturbances. It underscores that that’s a tough job and we have to keep that in mind, and my hope is that they can heal and get back to work as soon as possible.”

“There’s no excuse for the kind of violence that we saw yesterday. It is counterproductive. When individuals get crowbars and start prying open doors to loot, they’re not protesting. They’re not making a statement. They’re stealing. When they burn down a building, they’re committing arson. And they’re destroying and undermining businesses and opportunities in their own communities that rob jobs and opportunity from people in that area.”

Obama explains what he told Maryland’s top politicians the day before: “So it is entirely appropriate that the mayor of Baltimore…and the [state’s] governor…work to stop that kind of senseless violence and destruction.”
While Obama acknowledged that some had come to protest peacefully, he was generally outraged: “It’s…a handful of people taking advantage of a situation for their own purposes, and they need to be treated as criminals.”

What was Obama’s plan for reform? Well, he had no wish to “federalize” all police forces and, certainly, there was no mention of “defunding” them, as today’s radicalized “communist-crats”, like Senator Alexandria Ocasio-Cortez have decried. Obama said:

“Now, the challenge for us as the federal government is that we don't run these police forces. I can't federalize every police force in the country and force them to retrain. But what I can do is to start working with them collaboratively so that they can begin this process of change themselves.”

Obama then recommended a federal grants program for police “body cameras” which could help provide transparent witness accounts in a court of law, to dispute both the false testimony of police and indicted suspects. “It wouldn’t solve every problem, but would make a concrete difference in rebuilding trust,” he said and help make “sure that the overwhelming majority of effective, honest and fair law enforcement officers … [ are] able to do their job … because it…will put a stop to those handful who may be not doing what they're supposed to be doing.”

Lastly, Obama had some final economic words of wisdom. “We can't just leave this [crisis] to the police. I think there are police departments that have to do some soul-searching. I think there's some communities that have to do some soul-searching.” He said without “making any excuses for criminal activities”, the Baltimore violence was not just a reaction to corrupt or inept law enforcement. Obama stated it is the poor communities themselves that are also to blame.

In “impoverished communities … where children are born into abject poverty… [where] they’ve got [bad] parents often because of substance-abuse problems or incarceration or [because they] lack education themselves ….it’s more likely that those kids end up in jail or dead, than they go to college.”
“In communities where there are no fathers who can provide guidance to young men; communities where there’s no investment,….the drug industry ends up being the primary employer.”
“If we think that we're just going to send the police to do the dirty work of containing the problems that arise there without [us] as a nation…[asking ] what can we do to change those communities….and give those kids opportunity, then we're not going to solve this problem.”

While there is much more to Barack Obama’s heart-felt discourse, the former Democratic president sounds a lot like the Republican incumbent Donald Trump. They are much more similar than Obama’s allies in power today would want us to remember. Like Trump, Obama was wise enough not to call violent protestors “protestors” but by their real names: “thugs” and “criminals.” They both sought to defend “peaceable assembly” as proclaimed in the U.S. Constitution’s sacred First Amendment. Just like Trump, Obama was quick to order an immediate independent investigation of the Gray case by his Department of Justice. Like Trump, Obama did recognize that the deeper, more systemic issues plaguing black America has much more to do with fatherlessness, drug use, education, entrepreneurial opportunity in their own neighborhoods and robust economic development across the nation.

The two latter factors define how Obama and Trump stand miles apart. It is the Republican who has clearly won this victory for African Americans, reaching in 2019 the lowest black unemployment  rate in U.S. history and created numerous commercial “opportunity zones” in their business districts. Trump is of the same party as Abraham Lincoln who won their liberty from slavery, a life for dignified work, protagonism, and citizenship in 1865.