Here's the damage from online distance learning. And they call it "normal."

Studies from Gaslini Children’s Hospital in Genoa, Scotland, France, and the Italian Journal of Pediatrics conclude that young students and children are developing behavioral and regression problems during lockdowns and because of online distance learning. In addition, there is evidence of depression, stress, breathlessness , sleep deprivation, separation anxiety, and reduced interaction with parents. Parents are inclined to accept this "sacrifice" thinking it will soon pass. But it's shameful the mass media are relentlessly reporting this situation as the "new normal." 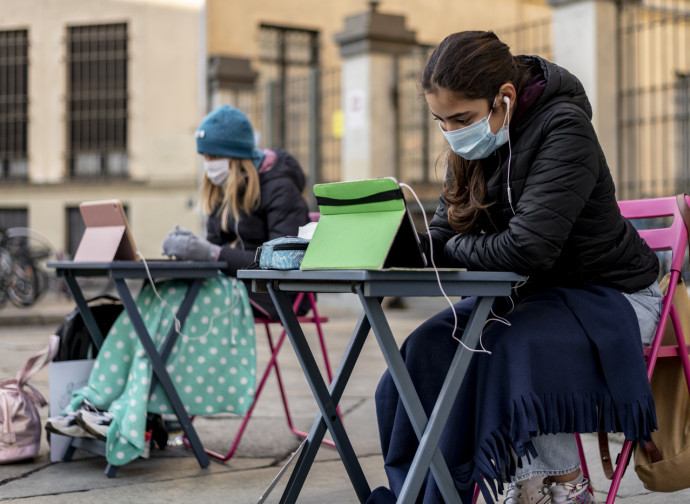 At last we have some data that enable us to answer an important question: what are the effects of lockdowns and online distance learning on children and adolescents?

Let's start with a recent study conducted by Gaslini Children's Hospital in Genoa on 6800 individuals throughout Italy. The study concluded that behavioral problems and symptoms of regression have occurred "in 65% and 71% of children respectively under or over 6 years of age.” The research states that “regarding children under the age of six, the most frequent disorders are increased irritability, irregular sleep, and anxiety (agitation, separation anxiety) while, for children and adolescents aged 6-18, the most prevalent disturbances concern "somatic issues” (e.g. anxiety and somatoform disorders such as feeling breathless) and sleep irregularity (difficulty in falling asleep and waking up to start online lessons from home)."

It is important to point out that "difficulties in falling asleep and  waking up" are generally associated with depressive trends, while "sleep disturbances" are now considered to be linked to prolonged electronic screen-time. The movement of images, bright colors, strong light, and electromagnetic waves all work to alter human circadian rhythms, reactivating our bodies to stay awake. In youth aged 6-18, "a significant alteration of sleep patterns has been observed along with a tendency to ‘phase delay’ (teenagers going to bed much later and unable to wake up in the morning), becoming a sort of domestic "jet lag." In addition, increased emotional instability, irritability and mood swings have been observed in this older population segment.”

A worldwide survey has found that in children aged 6-18, a whole host of behaviors are connected to lockdowns. These include uncertainty, fear, isolation; sleep disorders, nightmares, loss of appetite, restlessness, inattention (inattention, not disattention) and separation anxiety.

In Scotland, lock-downs seem to have caused symptoms similar to PTSD (post-traumatic stress syndrome), a disorder usually caused by a traumatic, catastrophic or violent event. Typically, PTSD is a syndrome soldiers suffer after being involved in situations of dramatic military casualties. In addition to this, stress, worry, anxiety and loneliness have been detected. In France, stress, depression and anxiety all have been observed among youth.

To all this we must add other damage, not experimentally detected. This is caused by the lack of sport, physical movement, deprivation of sun and open air, all of which are essential for children's balanced psycho-physical development. We also know the importance of peer groups in the development of minors, but we cannot say as of yet what the consequences of its deprivation will be.

Let us now focus on online distance learning (ODL). ODL makes use of IT devices (computers, tablets, cell phones) and can be live or involve pre-recorded lessons. I myself am employing this method of teaching and can assure you that students’ attention spans, compared to "in-classroom lessons” drops dramatically in the "live" version of  online instruction (and even more so in pre-recorded lessons). If we add technical difficulties caused by faulty internet connections, program "holds", and the varying functionality of external devices (web-cams, microphones, headsets ...), we can gather an idea of what this mode of instruction is like. This is not to mention students’ joking around ("Teacher, I can'tttt hearrrrrr!!!!") and the looming presence of their parents.

As if all this weren't enough, we must include the ill-effects of using media devices for several hours a day (which the Gaslini research already accounts for). The Italian Journal of Pediatrics recently published a report on the use of IT devices in children under six years of age. The result is an significant reduction of math scores, attention deficit, and great loss of efficiency. Other related problems are obesity, sedentariness, unhealthy eating behaviors, headaches, neck and shoulder issues, sleep disorders (as discussed above), ocular damage (fatigue, irritation and dryness of the eyes), and diminished interaction between children and parents. Indeed, all these disturbances, as we have said, concern preschoolers. However, don't they also affect school-age children?

To my knowledge, many parents can confirm what this research has found. In short: the situation is very worrying, even dramatic. Parents might accept all this because they are convinced that it is part of a temporary sacrifice they must make while waiting for a return to normalcy, a return to in-class school, games, relationships, open air activities, and healthy physical movement. I don't want to delude anyone, but the mass media, right from the beginning of this situation, came up with a new buzzword: "the new normal." Nobody likes conspiracy theories, so the simultaneous and massive use of this phrase might just well be a coincidence: an idea that came suddenly and simultaneously to politicians and journalists alike. Even if this were so, why shouldn't we believe them? What if this really is the "new normal"? What if we are really experiencing the "new school" (in addition to the "new health care")?

Maybe so. But, dear parents, I therefore must ask you: “Have you ever considered home schooling?”