“The Global God Divide” is the new report of the Pew Research Center that interviewed more than 38,000 people from 34 different countries in 2019. It shows that the world is still very believing: 45% openly recognise the necessity of believing in God. It is a deeply-rooted conviction in nations like Islamic Indonesia and the Catholic Philippines (96%), much less in Europe (22%), but still present in the United States (44%). Italy gives bad signals, while the former USSR very good ones. 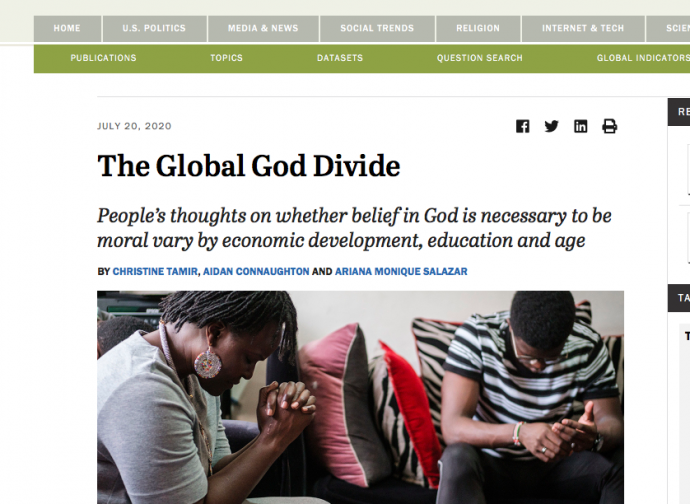 Is the planet becoming secularised or not? Does the world population still have faith? And what importance does it attribute to God in daily life? An attempt at providing answer to these questions is made in the new forty-page report issued by the Pew Research Center, “The Global God Divide.” The study, undertaken in 2019 by means of telephone and also face-to-face interviews, comprehensively interviews 38,000 people coming from 34 different countries and six different continents.

In short, it is a true and proper photograph of global religiosity, which, we reveal right away, has held some surprises. In fact, despite the forecast – and perhaps the hopes – of some, the first fact that has emerged from this work is that the world still has faith, indeed it has a great deal of faith. The proof is the fact that almost one out of two people (45%), in conflict with a personal and privatised version of the Creed, openly recognises the necessity of believing in God in order to live uprightly and have good values. It is a deeply-rooted conviction in countries like Islamic Indonesia and the Catholic Philippines (96%), much less in Europe (22%), but still quite present in the United States (44%).

A second fact emerges from “The Global Divide,” and that is the proportion of the world population according to whom religion and God play an important role in life: 62%. A bit lower, but not by much, is the amount of those who attribute importance to prayer: 53%. Now, since those who openly declare the importance of religion and prayer are notoriously only a part of the total number of believers, what the Pew Research Center tells us is that the world today is not simply religious – it is very religious. The sociologist Rodney Stark had already observed this, based on other data, in his book The Triumph of Faith (2015), but we now have another confirmation, flying in the face of the many prophets of secularisation.

Is everything alright, then? Not exactly. In fact, in this global panorama of faith there are also some shadows. And alas, the shadows are right in Italy, which based on the data at hand emerges substantially as a country that is turning its back on God.  There is no other way to explain how only 30% of our co-nationals maintain that there is a link between faith and morality, a percentage that is higher than that of France (15%) and England (20%) but less than that of Germany (37%) and Greece (53%); in any case, it is a very disheartening figure for a nation that in the collective imagination has Catholicism as one of its identifying traits.

Even with reference to those who declare that God is important in their lives, Italy is literally collapsing (down 21% from 1991 to 2019), while instead the countries of the former USSR are clearly recovering, like Russia (from 40 to 46%, +6), Bulgaria (from 41 to 55%, +14) and Ukraine (from 50 to 62%, +12). These last numbers certify an aspect of great relevance: the reversibility of secularisation and secularism. Suffice it to recall here that, under the Soviet regime, the frequency of attendance at places of worship was irrelevant, since it concerned less than 5% of the population. Yet today, in those countries that lived for decades in the grip of atheism, religiosity is flourishing again.

Yet Italy, home to the Vatican, the Pew Research Center confirms that it is now mission territory, even in need of evangelisation. How it was possible to have reached this point, obviously, is a question that all pastors should be asking themselves, beginning with the ecclesiastical hierarchy that for years has undertaken to fall in line with the dominant culture, softening the tones and smoothing out the homilies to the point that they have now become sterilised philanthropy. This does not take away the fact that each of us, right now, is called to evangelise: the Gospel calls for it and a spiritually anaesthetised people demands it. In contrast to a world that as a whole, as we have seen, remains very religious.