George Floyd, the true story of the victim and icon of the revolt

By now, the entire world knows who George Floyd is, the Minneapolis resident and African American killed last May 25 by means of inhumane police detention. He has become the iconic life to defend by militant Black Lives Matter, Antifa mobs rioting throughout America and by some peaceful protestors. But do we really know much about George Floyd beyond the facts of his tragic death? 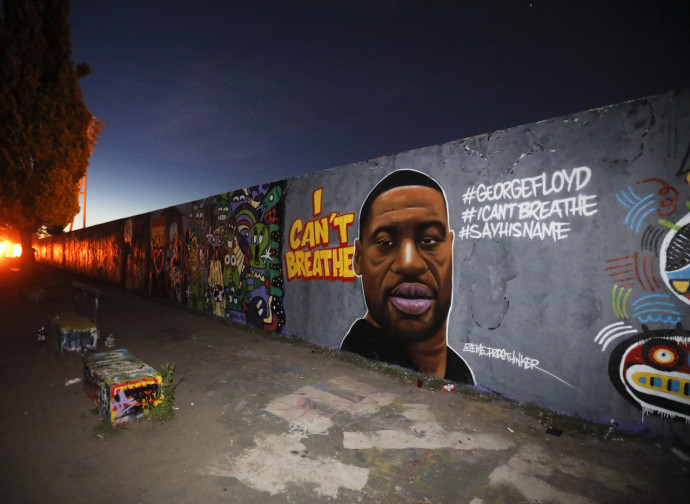 By now, the entire world knows who George Floyd is, the Minneapolis resident and African American killed last May 25 by means of inhumane police detention. He has become the iconic life to defend by militant Black Lives Matter, Antifa mobs rioting throughout America and by some peaceful protestors. All of them are calling for a revolution in American law enforcement.

However, do we really know much about George Floyd beyond the facts of his tragic death? While we justly mourn him and pray for his grieving family, we are discovering ever more about Floyd’s life, a human life that is being defended by both licit and illicit means.

What follows are some basic facts about George Floyd’s life.  Time was taken to research evidence, since so little was known about him before last week. The sources include Floyd’s own Wikipedia page as well as official reports from coroners, courts, and police in addition to various mainstream news outlets and untainted social media videos. The intent is not to depict George Floyd, God rest his soul, as neither a saint nor a sinner. The intent is to simply shed some light on facts which not all media are willing to cover under one single news headline.

Early Life, Friends and Studies
George Floyd’s Wikipedia page states he was born in Fayetteville, North Carolina, but was raised in Houston, Texas. At least six foot four inches (1.92 meters) tall, he was an athletic person. He was a star athlete at Yates High School, playing for both football and basketball programs. His school companions remember him as a “gentle giant” who, while a ferocious competitor on the field, was quiet and reserved person off it.  According to NBC News, after high school, “Floyd attended South Florida Community College…from 1993 to 1995 and played on the school’s basketball team. But he returned home to Houston before graduating.”

Among his lifelong friends was former NBA player Stephen Jackson, who grew up with Floyd in metropolitan Houston. In an NBC News interview, Jackson described Floyd as his “twin”, because of their strong physical resemblance. He said he affectionately remembers Floyd never having used him for his professional stardom and money. Jackson said he was one his favorite friends and always made a point of seeing Floyd when flying into Houston. He said Floyd had always “generously, genuinely supported” him “without any motives.” Jackson said Floyd “only called [on him] when he really need it.”

In Minneapolis, Floyd was not a loner. In his new city, he had apparently made many friends who admired him for his “beautiful spirit”.

Peace-loving Family, Children and Relationships
Not much is known about Floyd’s family. Some media outlets have mixed reports about how many children he had by way of different relationships. According to his Wikipedia page: “He had five children, including two daughters living in Houston, ages 6 [Gianna who lives with mother Roxie Washington] and 22 [Connie], and an adult son [Quincy] from Bryan, Texas. The names of the other two children are not revealed.

Quincy, aged 27, had an estranged rapport with Floyd and didn’t immediately recognize his deceased father on television. As Chicago’s WGNTV news site reported: “[Quincy Mason] Floyd said he was a young child, about 4 or 5 years old, when he last saw his father. It wasn’t until after Memorial Day when news of George Floyd’s death in police custody in Minneapolis made it to his son". “I didn’t recognize who it was until Mom called and told me,” he said. “She said, ‘Do you know who that guy was?’ I said no. she said, ‘That’s your father.”

In the same WGNTV post, Floyd’s children Connie and Quincy called for peace and “denounced  the violence that has unfolded in other cities.”
“The violence is not the right way to do it,” Connie Mason Floyd said. “Now, this is beautiful, but the violence, it won’t solve nothing.”
“Tearing up things, it’s not going to solve anything,” Quincy Mason Floyd said. “My dad is in peace and we have to be the ones to deal with all this stress. It’s going to be tough to get over this day by day.”

Terrence encouraged the crowd, instead, to channel their anger with the power of their political vote and to educate themselves.
George Floyd himself, in a posthumous Twitter video, revealed his anti-violence and religious views. He complained about a young black “generation that is clearly lost… You youngsters are just going around and just busting [sic, firing] guns in crowds, [with] kids getting killed…Come on home… One day it’s just going to be you and God. You are going up or you are going down. You know what I am saying?”
Curiously in Floyd’s autopsy , an “11 cm….blue tattoo of a pair of praying hands” was noted on Floyd’s abdomen, a sign that he valued spiritual prayer.

Floyd was not married at the time of his death. He did leave behind a girlfriend, Courteney Ross, a young white woman who said she was “heartbroken,” as Sky News reported. “Waking up this morning to see Minneapolis on fire would be something that would devastate [him]," Ross told the Minnesota’s Star Tribune. “He loved the city. He came here [from Houston] and stayed here for the people and the opportunities. … Floyd was a gentle giant. He was about love and about peace.”

Floyd’s work
According to an NBC report, due to the COVID economic shutdowns that led to many layoffs in Minnesota, Floyd was unemployed at the time of his arrest. He formerly held two jobs as a bouncer at Conga Latin Bistro and worked as a truck driver. It is not known whether he was involved in uncontracted labor or illegal activities to earn his keep. Floyd, like all American citizens, surely received a stimulus check ($1200 per adult and $500 per any dependent child under 17 for gross income under $75,000) from President Donald Trump provided he had he filed taxes for 2018 or 2019.

Before moving to Minneapolis from Houston for a new start in life, Floyd had several odd jobs, including car customization and was an aspiring rapper for the group Screwed Up Click, while spending some significant time in Texas’s prison system (see below) for convictions that included a major felony as well as the possession and intent to sell illegal drugs.

Floyd’s Health
Minnesota’s Hennepin County medical examiners’ report has been released on Floyd’s death. It states he had died at 9.25 pm on May 25. His cause of death, according to the signing pathologist Dr. Andrew Baker, was “cardiopulmonary arrest.”

Interestingly, the report notes Floyd had previously tested positive for COVID-19  on April 3. Nasal swabs performed on his corpse revealed that he still had traces of 2019-nCoV RNA. It is questionable whether, if asymptomatic, he should have been still sheltering at home to prevent spreading contagion. An ABC News article states:
"Since PCR positivity for 2019-nCoV RNA can persist for weeks after the onset and resolution of clinical disease, the autopsy result most likely reflects asymptomatic but persistent PCR positivity from previous infection."

The coroner’s toxicological exam stated Floyd was intoxicated with synthetic “fentanyl” and had traces of other “psychoactive substances” such as methamphetamine, THC, and morphine. According to Wikipedia, The opioid Fentanyl is used “as a pain medication and together with other medications for anaesthesia. Fentanyl is also used as a recreational drug, often mixed with heroin or cocaine. It has a rapid onset and its effects generally last less than two hours… Common side effects include vomiting, constipation, sedation, confusion, hallucinations, and … to poor coordination. Serious side effects may include decreased breathing,…, low blood pressure, … or coma.”

According to ABC News, one of the 4 indicted Minneapolis officers, Thomas Lane, had “asked Floyd if ‘was on anything,’ [as he had] noted that there was “foam at the edges” of his mouth.
Finally, the same Hennepin County autopsy confirmed Floyd did have serious underlying health conditions, including severe “arteriosclerotic heart disease”, “hypertensive heart disease”, a “clinical history of hypertension”  and a “left pelvic tumor” which it claimed  as incidental.

Floyd’s Criminal Record
Floyd, unfortunately, was an ex-convict. He had an extensive criminal record of drug possession, the intent to distribute and sell controlled substances, theft, and aggravated armed robbery. According to the full criminal justice system records obtained from the Daily Mail, between 1997 and 2007 Floyd had a total of 9 official charges that included a conviction and 5-year prison term served for “aggravated robbery with a deadly weapon” of a Texan woman named Aracely Henriquez. We read a summary of the court records:

"Floyd had at least five stints in jail. In one of the charging documents, officials noted Floyd had two convictions in the 1990s for theft and delivery of a controlled substance, but it is not clear if Floyd served any time for either of those offenses… The final straw for Floyd came after serving five years in prison in 2009 for aggravated assault stemming from a robbery in 2007 where he entered a woman’s home, pressed a gun into her stomach and searched the home for drugs and money, according to court records.”

Floyd had pled guilty to the 2007 aggravated armed robbery charge. A second armed suspect in the case was assigned by  Floyd to guard Henriquez while he searched the house for drugs and money. According to the court’s statement, she was “struck in the head and side areas…with his pistol after she screamed for help.”

Conclusion
In the end, it is difficult to form a complete picture of any one citizen’s life, much less one as complicated and relatively unknown as George Floyd’s. What is certain and sad is that  the 46-year old Floyd still had plenty of time on his earthy clock to make amends for his past and have a flourishing future. What’s more, Floyd’s family is clearly peace-loving and adamantly against the escalating violence dishonoring his name, faith, and nation. It is becoming more and more evident, that many black families like Floyd’s would much rather see a cultural war, one based on moral reform and true Christian love, as opposed to an ideological one, with mob-led and hate-filled political bias. For the Floyds, the lives of one and all matter and they deserve our most sincere prayers.