From Fatima to Brescia, the story of a special statue of Mary

The statue of Our Lady of Fatima which has been on loan to the The Daily Compass tells a largely untold story that exudes both mystery and faith. It has been treasured by a family in Brescia for 55 years and was brought to Italy by a spiritual son of Padre Pio who held a particular devotion to the Blessed Virgin. He obtained the statue after making an “ardent” request to the rector of the Shrine at the Cova d’Iria in Fatima. This is the story.... 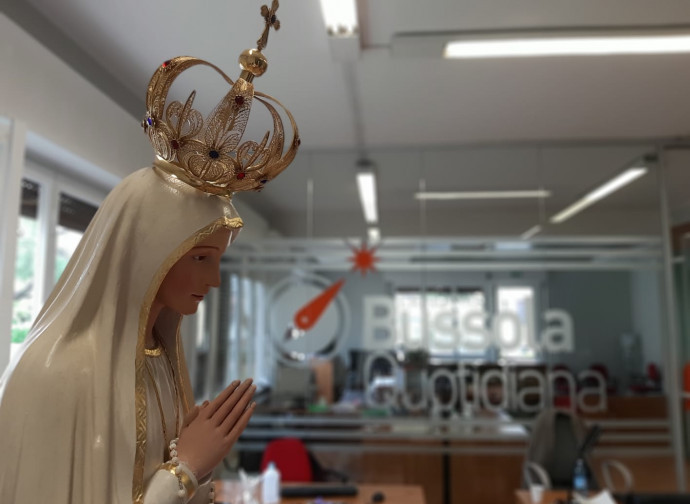 When you look at her up close, she appears in all her beauty, especially in the delicate features of her face and her eyes, which are truly life-like. It is one of the smallest statues – at least with respect to its size – of Our Lady of Fatima that is presently outside of Portugal but was once kept in the Shrine of the Cova d’Iria. This is the story of that statue which was brought to our chapel at the editorial office of The Daily Compass from May 26 until June 6. The Daily Rosary prayed by the staff at 12:45 and which is livestreamed on Facebook, was prayed before her during this period of loan.

The statue is about five feet tall, weighs about 50 pounds, and has been kept by a family in Brescia for 55 years in a chapel inside their home. Its story is unique and while it is clear in its essential features – with all the official documents to prove it –  in others it is shrouded in mystery, linked to a spiritual son of Saint Pio of Pietrelcina named Paolo, who passed away at the beginning of 1999. His surname is omitted as a matter of family privacy. We need to offer a few preliminary words about Paolo, who, as a true disciple of Padre Pio, sought to imitate his hiddenness. “He was a consecrated celibate layman, with a profound devotion for the Blessed Mother,” his brother tells us, “but we don’t know what the consecration was because he revealed so little about himself.” Starting in his youth, his brother adds, “Paolo had begun to help the sick, especially those who were dying, assisting them until their death.” When he was 23-24 years old, he left his native land and said goodbye to his family in order to better dedicate himself to serving the elderly and the poor. «He often said to us: “There is more money in my pockets than in many businesses. My cashier is Saint Joseph. When I have people to assist and I don’t have the money to help them, I spend the night in prayer before Saint Joseph, and in the morning I always receive what is necessary”».

One day, during his travels, Paolo went to San Giovanni Rotondo to meet Padre Pio. The Capuchin brother said to him: “Listen, tomorrow go back to Brescia, because they are waiting for you to go to Fatima.” Paolo obeyed, and when he went back home, he received a phone call. Four people, including a woman whom he knew, told him to get ready “because tomorrow we are leaving for Fatima.” It was his first time at the Portuguese shrine.

In 1965, he returned to Fatima once more in the company of his four friends from Brescia. It was September 13, 1965, the eve of the opening of the fourth and final session of the Second Vatican Council, presided over by Paul VI, who was from the town of Concesio, also in Brescia.  The little group brought a beautiful Golden Rose, made by local jewellers, as a gift for the Blessed Mother. The Rector of the Shrine, Antonio Borges, who had already received a Golden Rose in the name of Pope Montini earlier that same year, expressed his deep appreciation.

Paolo immediately took the opportunity to make his ardent request: to bring the Pilgrim Statue of Our Lady of Fatima to the land of Paul VI. Stunned, the Rector Monsignor Borges declined. But Paolo would not be stopped, and he asked if instead it might be possible to bring back to Italy the statue from the Chapel of the Apparitions, the first one to be made, work of the sculptor José Ferreira Thedim in 1920. Once again the rector of the Shrine was forced to say no in spite of himself. An account of the story is found in several Portuguese newspapers of the time.

But that night something changed. As Paolo’s brother explained to The Daily Compass, “the next day the rector told Paolo that he had been unable to sleep all night and that he had made a decision. He could not give him either of the two statues he had asked for, but he could give him a third statue of the Blessed Mother that was venerated in the Shrine. And this is the statue that still today, 55 years later, is kept by my family.” On that day, September 14, 1965, Holy Mass was celebrated at 5:30 p.m. in the Basilica of Fatima in spiritual union with the council Fathers who were gathering in Rome. Afterwards there was solemn exposition of the Blessed Sacrament and the recitation of the Rosary for the success of the Council.

According to an article written at the time in the newspaper Novidades, “After the Eucharistic benediction, a procession was organized with a beautiful image of Our Lady along the road to the chapel, accompanied by all of the faithful who completely filled the Basilica. The image was carried [on the shoulders] by members of the commission from Brescia with two ladies on the side who carried the Golden Rose offered to the Shrine.” Once they arrived at the Chapel of the Apparitions, followed by many pilgrims who obviously knew nothing about why this particular procession was being held, “the monsignor-rector offered some words of explanation about the unexpected ceremony, and then he crowned the Image of the Most Blessed Virgin that was going to leave for Italy the next day [September 15].”

“At the end,” the account in Novidades continued, “everyone sang the Salve Regina with great fervor, while the Image of Our Lady was placed on the column that indicates the place of the 1917 apparitions.” To crown the proceedings, Monsignor Borges sent a telegram to Paul VI: “Most Blessed Father, the group of pilgrims from Brescia, together with the faithful of the Shrine of Fatima, offer to the Most Blessed Virgin a Golden Rose, imploring her maternal protection over the Ecumenical Council.”

On September 15, 1965, the statue left for Italy. And for almost 36 years it never left Paolo’s family home, except for a couple of “outings” within the parish. “My brother used to joke and say: ‘The day will come when if you want to see her you will have to go to her.’” Paolo had also received a personal prophecy from Padre Pio, who revealed to him once that “when you are 60 your life will undergo a significant change.” We don’t know exactly what the saint from Pietrelcina was referring to, but we do know that Paolo died when he was 60 years old, just a few days before his 61st birthday.

Another certainty involves the special link that this statue has with the Capuchins. For decades now they have celebrated one or two Masses each month in the family chapel where the statue is kept. And they are the ones who initiated the practice of peregrinatio Mariae outside the parish. “The first pilgrimage,” Paolo’s brother explained, “took place around 2001 at the request of a Capuchin whom we knew well. The friar had come to celebrate Mass in our chapel, and when he returned to San Giovanni Rotondo, he asked me: ‘Will you give me the Blessed Mother during the month of May to bring her to Sabbioni di Crema?'”. This is the place where there has been a Capuchin convent since 1575.

From that time on, this splendid statue of Mary, who visibly speaks to us of the love of God and of the Heavenly Mother we each have, has been brought to various places in Lombardy, and also (by boat) to Emilia-Romagna. She is always welcomed with great joy, and she always reciprocates with both visible and hidden graces. 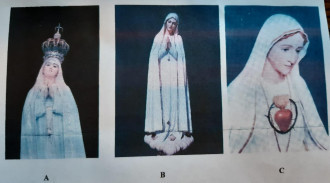 The statue is in accord with what has been termed “Model B” (see photo). There are three fundamental models for Fatima statues. They are models that have been made over the years – based on the descriptions given by Sister Lucia – by José Ferreira Thedim (1892-1971), who completed the original statue (see “Model A”) in 1920. Mind you, when people speak of “12 copies,” they are referring to the statues that are similar to the first example of the Pilgrim Statue of Fatima, completed in 1947, and not to the 1920 statue, which is instead kept almost permanently in the Chapel of the Apparitions (it is brought out each year on May 13 and on special occasions).