From communist to Franciscan, by way of Medjugorje

An anti-clerical communist, Ercole went to Medjugorje to follow his girlfriend (a divorced woman with children) who had converted. There, thanks to the Blessed Mother, he saw the lie he was living and also God, who held out His hand to him and led him to enter the Franciscan order with the name Brother Cristoforo. In this interview with The Daily Compass, he shares his dialogue with the visionaries on the secrets, the crisis of the Church, and the battle which awaits us before the Triumph of the Immaculate Heart of Mary 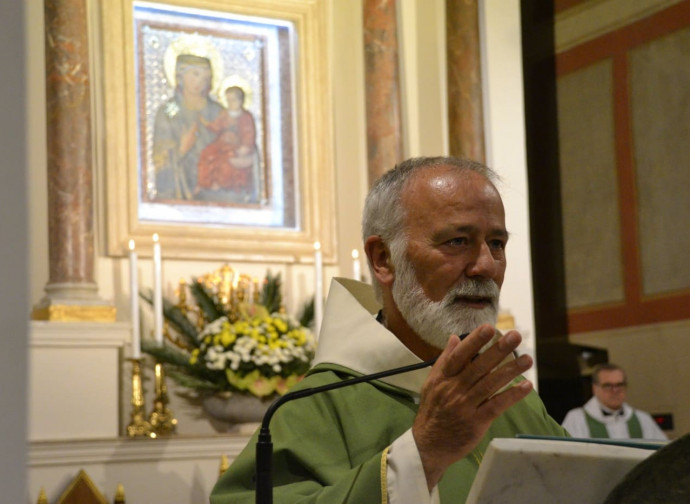 The Sanctuary of Fonte Colombo [in the mountains near Rieti, about 80km northeast of Rome], is one of those places where you breathe in a tiny foretaste of heaven. There is still a friary here, where seven Franciscan brothers live.

One of the brothers shares his personal vocation story with us: Father Cristoforo Amanzi, O.F.M., is now 65, but as a young man he spent at least 16 years outside the Church. Then, in a sudden and unforeseen way, he went to Medjugorje. It was not exactly a pilgrimage. Ercole (this is his baptismal name), who was 32 years old at the time, went there to meet up with his companion at the time: a young woman, separated from her husband with two children, who had recently begun a process of conversion. This was not at all pleasing to Ercole, whose intention was to meet up with her, stay a couple of days, and then continue with her on a vacation at the seaside on the Dalmatian coast. But things went very differently. The woman, who had decided to leave him because she was already married, tried to encourage his conversion with the help of some of the pilgrims who were accompanying her.

During a conversation with a religious sister, Ercole had a truly mystical experience: “When I gave her my hand, I no longer saw anything but four letters written on a black background, as brilliant as the sun, spelling out the word GESU.” The next day was spent in reflection, at the end of which Ercole decided to climb Mount Krizevac. The next morning, as he took the first steps, he tried to recite the Hail Mary, the only prayer whose words he could remember. “After a short time I became lost in my thoughts, and during the climb I saw in my mind the most important episodes of my life. I saw clearly what had happened: the errors, my own self-betrayal, my sins. It was an illumination, an examination of conscience, which I became fully aware of only later. During the last stretch of the way, as I drew near to the cross, I heard a male and paternal voice which said to me: “This is what you have done; I propose another life to you.” In one moment I understood everything: God exists; he had patience with me, he always loved me, he was giving me the possibility of loving, of starting over.”

So what had happened in the sixteen preceding years of Ercole’s life? “I had begun to progressively distance myself from God around the age of 16,” Father Cristoforo told The Compass, “in full awareness that I had decided to change my attitude.” Christianity, in his perception, had become incompatible with “the necessity of defending myself from arrogance and abuse of power. I wanted to become more aggressive and behave like everyone else. But in fact I was betraying myself.” The young Amanzi grew up in a family in Abruzzo of humble extraction; he obtained a degree in statistical science when he was 29. When he was about 25 he registered with the Italian Communist Party (PCI) in his area: “At that time everything pushed in that direction,” he recalls. “The goal of a more just society seemed within reach, and in communism I too saw an answer.” This choice confirmed Ercole in his anti-clericalism. “At home, only my mother remained Catholic. Papa did not practice his faith because he had to work, while my sister also grew distant from the faith. Only my mother continued to pray, but whenever she tried to talk about topics of faith, nobody wanted to talk about it with her. But, “Since I did not have a point of reference in God, I felt the importance of having earthly points of reference for my life: work, politics, sports, friendships, romantic relationships. Later, when I experienced God, I realised how fragile these earthly points of reference are.”

Upon entering the Order of Friars Minor in 1990, Ercole Amanzi chose the religious name Cristoforo. By reading the story of Saint Christopher, he discovered that the liturgical feast day of the saint coincided with the date of his conversion: July 25, which, moreover, is the feast day of the patron of the parish of Medjugorje, Saint James. And there is an even more significant coincidence: at the dawn of Christianity, the cult of Saint Christopher replaced the pagan cult of the demigod Hercules….This discovery was decisive!

Taking the Franciscan habit and changing his name, Father Cristoforo walked along the way traced by the “poverello” of Assisi, to whom he is dedicating a video-catechesis series at Cristiani Today in order to teach people about the authentic Saint Francis as he is described in the Franciscan sources, not the Francis of clichés based on environmentalism and poverty.

A place where Franciscans are present in large numbers is Medjugorje itself, where Father Cristoforo returns often as a pilgrim guide, along with members of the Franciscan fraternity which he founded, “Madre della Riconciliazione e della Pace.” The name of the fraternity stems from what happened to Marija Pavlovic on June 26, 1981: the Blessed Mother appeared to her weeping with a Cross behind her, saying, “Peace, peace, peace, only peace, be reconciled with God and with each other…Through Marija, the Blessed Mother asked for peace, not as the world gives it but as her Son Jesus gives it. If people do not pursue this reconciliation and this peace, if they do not attain self-acceptance, their restlessness risks producing wars, both small and great. The invitation of the Queen of Peace is an urgent one: be reconciled with God through Jesus, who reveals the authentic face of the Father, One and Triune. The Madonna says: lay aside all your hatred and grudges, go beyond the offences suffered, focus on what is important, because this life is only a breath compared to eternity: it is a succession of occasions that the Lord gives us so that we can grow and mature in humble and wise love, the love of Jesus. In order for this to happen, we need to believe in Him.”

Like so many others, Father Cristoforo sees in the messages of Medugorje a continuity not only with the messages of Fatima but with all the Marian apparitions from the Rue de Bac [where the Blessed Mother appeared to Saint Catherine Laboure in Paris in 1830] to today: “There is no need to disregard what has happened in Medjugorje. The contents of the messages are completely in line with the sound doctrine which the Church has handed down for 2000 years. If there had been problems from the doctrinal or moral point of view, the Church would have already closed Medjugorje down. The messages may be synthesized in five points that completely conform to the Catholic Tradition: Prayer, the Word of God, Confession, the Eucharist, and Fasting.”

How close is the time of the ten secrets? “In 2007, I asked this of the visionary Vicka, who replied to me that they would arrive “neither early, nor late.” Father Petar Liubicic, the priest who must reveal them, is now already over 70 years old. On August 25, 1991, in Medjugorje, in one of the apparitions, the Blessed Mother said that she was there to bring to fulfillment what she had begun at Fatima, where she announced, “My Immaculate Heart will triumph.”

Against the background of the secrets, which are presumably drawing ever closer, there is “a disturbing situation, with humanity and the Church experiencing difficulties, where anti-Catholic laws and attitudes are constantly increasing.” According to Father Cristoforo, the weakness that is found in the Church is the fruit of relativism: “Many say that we believe in Jesus, but each person describes His Face in a different way, and thus we find ourselves divided. We need to return to gazing on the one authentic Face of Christ. And who can show us his face if not His Mother?”

“I believe,” the friar concludes, “that we are not far from the Third Secret, the indelible sign that people talk about. It should be the cause of many conversions, but it will not be enough to give us a time of peace in the immediate future. It will be a time of faith but also of trials due to those who will not believe. These latter will be ever more aggressive. In the end the Immaculate Heart of Mary will triumph. Aware of this, we must persevere in faith, remaining united and firm in prayer and charity, like the first Christian communities.”