Éric Zemmour, a journalist and essayist of Algerian Jewish origin, could really become the new reference point for French Catholics if he runs in the next presidential election. Macron is the first 'post-Christian' president who considered the national religion of France as one of many cults. While the France of the institutions and the media has slipped to the left, the people are becoming increasingly conservative Catholic. Zemmour, though not a Christian, is well aware that without the Church France would be lost. 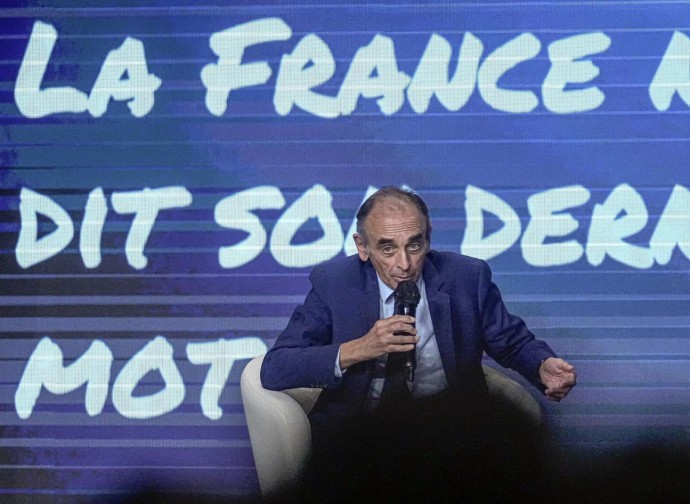 Have French Catholics finally found in Éric Zemmour (journalist and essayist, of Algerian Jewish origin, born in 1958) a leader they can trust? It would seem so from the enthusiastic welcome he has received, for example, from the many veterans of the Manif pour tous, which in Hollande's time had mobilised a large part of France against same-sex marriage. They lost the battle, but it showed how important French Catholicism was to the people, while the institutions and the media considered it a dying "social reality". Politically, the Manif pour tous mobilisation was anything but successful: not only was the law introduced, but in the subsequent presidential election, in 2017, the leader closest to them, the neo-Gaullist François Fillon, was soundly defeated - whereas Marine Le Pen, who had not participated in any of the anti-gay marriage demonstrations, gave Catholics very few guarantees.

Catholic electors in the second round either abstained or gave their vote to Macron. It turned out to be a big mistake: the current president is the first authentically post-Christian French head of state. Hollande, heir to the old masonic anticlericalism of the socialists (with the exception of Mitterrand, who wanted a religious funeral and never opposed the Church), was in any case within the horizon of Christianity, even though he fought against it: indeed, precisely for this reason. For Macron, on the other hand, Catholicism is not 'the enemy', to use a famous formula by Leon Gambetta. It is simply one of the many religions that make up the French "multicultural" landscape, a substantial minority, certainly to be protected, as he proclaimed on the occasion of priests killed by immigrants or Islamists, or after the Notre Dame fire: but more or less as one protects pandas.

Now, it is true that the number of those who participate in religious services and even more so in the associative life of parishes is in rapid decline. However, as two recent studies show, one by Philippe Portier and Jean Paul Willalme on religion in contemporary France (La religion dans la France contemporaine, Colin, "Religion in contemporary France") and one by the political scientist Dominique Reynié (Le XXI siècle du christianisme, Editions du Cerf "The 21st Century of Christianity"), quantity does not kill quality: Christians are becoming a minority, but much more combative, reactive and aware of what is at stake than they used to be. Basically, this confirms a prediction (or prophecy) of John Paul II and especially of Benedict XVI.

Precisely because they have become more "identitarian", so to speak, French Catholics do not want to be protected but want their voice to be heard in the public sphere, and they certainly no longer trust the remnants of the various French-style Christian democracies, now embodied by Bayrou, who is completely subordinate to Macron. Precisely because of this greater sense of pride in calling oneself a believer, the hostility of Hollande's time is always better than Macron's indifference: the fact is that no candidate or pre-candidate warmed the hearts of believers until the arrival of Zemmour.

Zemmour is a Jew, a creed he practised until 2013, but he has been repeating for years that he is "steeped in Catholicism". And it is indeed so, because being a Gaullist nationalist, Zemmour knows very well that the history of France, which does not begin in 1789, would be non-existent without the Catholic Church on the one hand and Catholicism on the other, both as popular devotion and as impregnation in high culture, and literary culture in particular. Reading his books, the latest La France n'a pas dit son dernier mot ("France still has not said the last word") but above all, as far as religion is concerned, the previous Destin Français ("French Destiny") one sees that he belongs to the tradition of what Maurice Barrès, a right-wing novelist and parliamentarian at the beginning of the 20th century, called "Catholic atheists". Personally non-believers, but convinced that without Catholicism we would be nothing, we would have no past, but above all we would have no future. “Adult Catholics” deride this tendency as insincere and almost aimed at instrumentalising religion: but in reality it protects it, especially against the challenge of Islam, much more than many “devout believers”.

Zemmour is the first, and much more than Fillon himself, who is saying to French Catholics j'ai vous ai entendu, that he is willing to bring their voice into the public and political sphere, as a fundamental part of the French nation. Zemmour's is, after all, a continuation of the original Gaullism of the General, André Malraux, and many others, and of the "sovereignist" neo-Gaullism of Philippe de Villiers and Philippe Seguin, and also of various intuitions of Sarkozy, even if the latter does not escape Zemmour's criticism as being excessively "Americanised".

Nothing to do with the extreme right or with racism, as the mainstream media write, and left-wing politicians and those of the “right-wing left”, i.e. many exponents of the EPP, claim. Moreover, today De Gaulle, Malraux, Pompidou would be considered extreme right-wingers. While the real French nation has become increasingly conservative, the legal nation and the media nation have moved further to the left. And for newspapers such as Le Nouvel Observateur, Libération, or Le Monde, being a believer (in Christianity, of course, not Islam) is now considered a disgraceful thing, to be ashamed of, while Catholic churches and religious buildings fall to pieces, are demolished or are set on fire by “mysterious hands”.

Maybe Zemmour won't go far; maybe he won't even run for office: but from today French Catholics have one more hope.