Fratelli tutti omits the primary affirmation of one true religion by bending both the Church and freedom to a temporal dimension. It ushers in the relativisation of the Christian faith and promotes the idea that the Gospel is one of the sources of inspiration for attaining universal brotherhood. Thus the Church takes its place among the architects of a world without Christ. 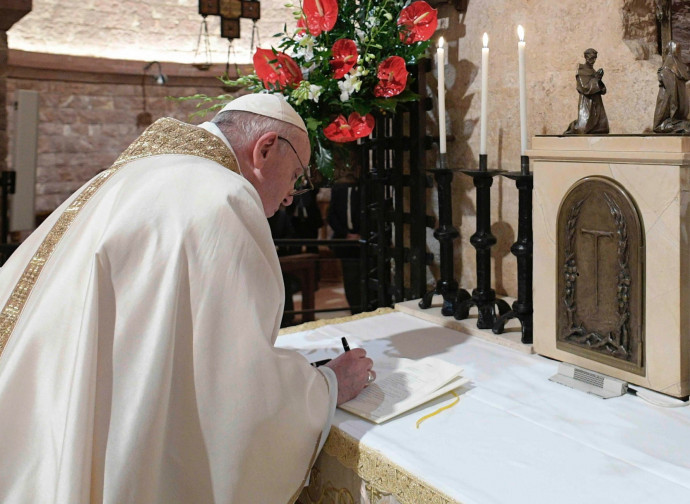 In the new encycical Fratelli tutti we find something of everything, without order or clarity. This is not a compliment, but it’s hard to deny anyway. Within this bazaar of ideas, particular attention is drawn to the paragraphs dedicated to religious liberty. In paragraph 279, Francis writes:

“We Christians ask that, in those countries where we are a minority, we be guaranteed freedom, even as we ourselves promote that freedom for non-Christians in places where they are a minority. One fundamental human right must not be forgotten in the journey towards fraternity and peace. It is religious freedom for believers of all religions. That freedom proclaims that we can “build harmony and understanding between different cultures and religions. It also testifies to the fact that, since the important things we share are so many, it is possible to find a means of serene, ordered and peaceful coexistence, accepting our differences and rejoicing that, as children of the one God, we are all brothers and sisters.”

Religious freedom, in the aforementioned paragraph, is connected to the contribution that all religions can make to the attainment of a peaceful form of coexistence; it is functional to the creation of a universal brotherhood, to which each religion offers the “many things” that it has in common with others.

It is interesting to note that the text does not refer, as one would have expected, to the Second Vatican Council’s Declaration on Religious Freedom (Dignitatis Humanae); instead it is preceded, in paragraph 277, by a carefully truncated quotation from paragraph 2 of the Council’s Declaration on the Relation of the Church to Non-Christian Religions (Nostra Aetate). These two details – the omission of Dignitatis Humanae and the presence of surgically selected passages from the Declaration on inter-religious dialogue – are not without effect. And unfortunately, this effect appears to threaten the very foundations of Revelation, instead serving the “new humanism” without Jesus Christ which is establishing itself with great strides.

But let’s proceed in order. DH begins with a clear affirmation: “God Himself has made known to mankind the way in which men are to serve Him, and thus be saved in Christ and come to blessedness. We believe that this one true religion subsists in the Catholic and Apostolic Church, to which the Lord Jesus committed the duty of spreading it abroad among all men.”

This is the constant horizon within which the defence of religious liberty must take place; a horizon, as can be seen, that exorcizes the temptation to a religious indifferentism and points out the path of evangelisation as an irreplaceable obligation for the Church. In this context, religious freedom is thus not the legitimisation of the claim of individuals or groups to choose the religion they like; even less is it the goal of the Church’s action, but rather the minimum condition for a person to be able to open himself without constraints to the recognition of the equally free initiative of God, who gives himself to man in Christ and in the Church, even though it is possible, on a contingent level, that this recognition does not occur or only partially occurs.

It is a limit placed on external powers, in primis the powers of the state, not arbitrarily but because of the fact that it is proper to man to freely seek the truth about himself, the world, and God. It is therefore a question of affirming the exquisitely vertical and spiritual dimension of man in the face of numerous and repeated reductionism of that innately spiritual nature.

What does Fratelli Tutti say instead?  It completely omits the primary affirmation about the one true religion and the mission of the Catholic Church, it forgets the vertical dimension of religious freedom, and it reduces both the Church and freedom to a temporal dimension. In paragraph 276 we read: “The Church ‘has a public role over and above her charitable and educational activities.’ She works for ‘the advancement of humanity and of universal fraternity.’” There is no mention of the supernatural mission of the Church, without which there cannot be any human promotion nor authentic brotherhood.

The next paragraph openly admits the relativisation of the Christian faith and of the immanentization of the mission of the Church. Number 277 recalls Nostra Aetate 2, but omits the incisive and troublesome passages which, while recognising the good present in other religions, clarifies that they “differ in many aspects from the ones she [the Church] holds and sets forth,” and then, even more gravely, it completely omits the paragraph that recalls the binding duty of the Church to announce Jesus Christ, not limiting herself to simply recognising the good present in other religions. The Church indeed “proclaims, and ever must proclaim Christ ‘the way, the truth, and the life’ (John 14:6), in whom men must find the fullness of religious life, in whom God has reconciled all things to Himself” (NA 2).

But in the new encyclical, there is no trace of this precise obligation of the Church, which is the very purpose of her existence. Indeed, what follows paragraph 277 is even worse. First, the Gospel is drastically reduced to a temporal dimension, to a music without which “we will lose the joy born of compassion, the tender love born of trust, the capacity for reconciliation that has its source in our knowledge that we have been forgiven and sent forth,” and “we will no longer hear the strains that challenge us to defend the dignity of every man and woman.” But not only that, the idea is even put forward that the Gospel is only one of the many fountains of inspiration that contribute to this marvellous universal fraternity: “Others drink from other sources. For us the wellspring of human dignity and fraternity is in the Gospel of Jesus Christ.”

An English Deist of the 17th or 18th century, even more than a Von Harnack, could not have written differently. The divine person of Jesus Christ, his universal mediation are completely silenced; the order of nature – which in the encyclical is above all the affirmation of a legitimate coexistence between religions – becomes detached from the order of grace. The social order – in the vision of Francis – can stand all by itself, the unity of the human race is achieved without any adherence to Jesus Christ and the supernatural action of the Church. Rather, the Gospel is simply one of many sources that can contribute to the common good.

In the (understandably) debated and questionable 1986 inter-religious meeting in Assisi, John Paul II, speaking in the lower Basilica of Saint Francis, bore witness to Christ as the one Saviour before all the gathered representatives of other religions: “I profess here anew my conviction, shared by all Christians, that in Jesus Christ, as Saviour of all, true peace is to be found.” A few days prior to this, on October 22, 1986, the same pope, speaking at a General Audience, synthesised the teaching of Ad Gentes: “According to the Council, the Church is ever more aware of her mission and her duty: even of her essential vocation to announce to the world the true salvation that is found only in Jesus Christ, God and Man. Yes, it is only in Christ that all men can be saved [...]. Aware of the common vocation of humanity and the unique plan of salvation, the Church feels connected to each person and to all, just as Christ “united himself in a certain way to every man.” And to each and all she proclaims that Christ is the centre of the created world and of history.”

Fratelli Tutti has decided instead to extinguish this announcement, to accommodate the Church among the architects of a new world without Christ, to give the green light to the idea that the unity of the human race can be achieved apart from the divine person of Christ, if anything by using the Gospel as one of the many inspirational texts of humanitarian principles.