Fratelli Tutti: much ado about (mostly) nothing

Pope Francis’s new encyclical Fratelli Tutti, strikes us less for the themes it deals with, or the various reflections and suggested courses of action, and more for the perplexity it creates about the true usefulness of documents written in this way. A 200-page encyclical poses several problems of content that should be properly considered, but above all else, it raises the question of why it is necessary to publish a such a lengthy document. 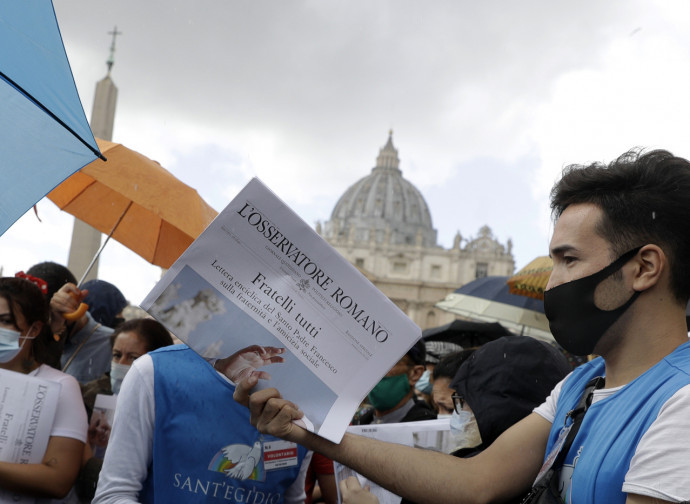 Leo XIII's 1891 encyclical Rerum Novarum was just 14,500 words in English. By contrast, Francis's Fratelli Tutti is 43,000 words in length. This means the latest papal encyclical is more than three Rerum Novarums in just one document. Either Leo XIII had very little to say or nowadays the way the Church's social magisterium is explained has changed.’

The claim that Leo XIII had little to say, since there was not much to write about in the late 19th century, is categorically wrong. We can say so, simply by the fact that Rerum Novarum is considered a "permanent model" of Catholic social teaching and because it led to "the fruitful labour of millions and millions of men who, stimulated by the social magisterium, have endeavoured to be inspired by it concerning their engagement in the world", as John Paul II wrote in his 1991 encyclical Centesimus Annus. Therefore, there is no doubt that the Church's social teaching has changed in the way and style it is now written. One has to wonder whether the extreme length of today's encyclical letters  provide any greater guarantee that they, too, will inspire the “fruitful labour” of men.

Scrolling through the pages of Tutti Fratelli we all understand what has bloated the text. First of all, the parts dedicated to introducing the current historical situation have greatly increased. It cannot be argued that, at the time of Rerum Novarum’s release, the socio-economic context was any less complex than it is today. Yet the ways in which Leo's encyclical captured the then social climate were bare and essential. Leo was aware that papal social analyses would become antiquated and if his text would last beyond any of his present-day contingencies, it could not risk diving too deeply into them. In Fratelli Tutti, on the other hand, Francis’s analysis is rather exhaustive, often entering into very minute social, historical and economic details, so much so that the latter become more important than the normative aspect of the Church’s magisterium which, in Rerum Novarum, was absolutely of primary interest.

The danger of a magisterial text that dwells on the sociological and historical framework is the overuse of socio-economic terminology, assessments and observations. By their very nature, the latter are questionable, both because they refer to empirical observations that can be challenged by other empirical observations and because fellow experts – namely, sociologists or economists  - can offer different interpretations for the exact same phenomena.

Thus, Fratelli Tutti is flush with questionable details. This was already evident in Francis’s Laudato Sì in terms of climate and environmental issues and even more so in Fratelli Tutti, beginning with his observations on this year’s Covid pandemic and affirmations on the "open society". What is doubtful and disputable cannot be considered immutable magisterium. The side effect is once the Church's social teachings become so secularised,  many debatable propositions are penned within encyclicals. If  social observations were so vitally important, encyclicals would have to be written every year, given the rapid changes in contemporary society and the Church's magisterium would be vey short-lived. Rerum Novarum, however, has endured the test of time and is still appreciated even today, precisely because it left out most of the then important socio-economic details, limiting itself to a mere 14,500 words.

Returning time and again to the same topics, such a long text, ends up repeating itself. Fratelli Tutti also presents different aspects of the same problem so that, in the end, it is not clear how to evaluate it in the light of the Gospel and natural law. Take, for example, the pope's observations on globalisation. I challenge anyone to extract from the encyclical’s text the Church's official position on globalisation and her related guidelines for human interaction. An encyclical conceived in this way becomes a great vessel of assertions (declarative, exhortative, parenthetical, hypothetical, assertive, normative, observational) from which we can then extract various meanings while combining differently part of the text for forming other opinions. It goes without saying that there is the continuous repetition of themes already widely examined by the Church's magisterium  (e.g. immigration ) and notions (e.g. "erecting walls" or "culture of confrontation") which begin sounding like overused slogans.

With these remarks I have yet to say anything about the contents of Fratelli Tutti, but I have dwelt on some aspects of its written structure. The primary concern of the Church today is no longer doctrine, but pastoral ministry. Still, one might wonder what pastoral use such a long  and detailed text like Fratelli Tutti might have. What we have, in essence, is a fluid-like text that can be broken down and reassembled to form propositions of various degrees which uses phrases and clichés that now belong to a well-established lexicon and which have become mechanically repetitive.

When reading Rerum Novarum, one understands that some (only a few) sentences are necessary to illustrate the current situation. Many others, however, are needed to indicate the Church's evaluation from a natural law perspective, while still other paragraphs are used for expressing the dogmatic and revealed foundations of Catholic social teaching. Still a few other sentences are set aside for hypothesising what can then be freely interpreted or re-evaluated over time. Now things have become complicated and at the length of 43,000 words.