Despite massive street protests, on Tuesday the French Senate began to debate a bill to extend artificial insemination to single and lesbian women. The final vote is scheduled for February 4th. Family associations and bishops highlight the absurdity of a text that eliminates the father figure and, therefore, creates orphans. 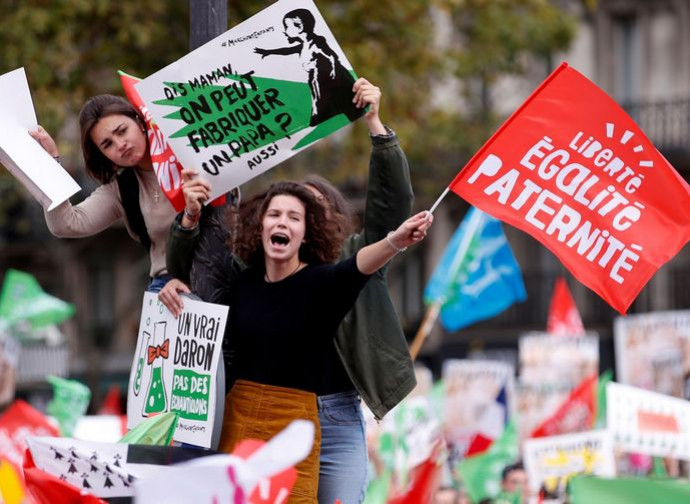 In the square in front of the French Senate, thousands of people have gathered in recent days to express their opposition to the bill that aims to extend medically assisted procreation (MAP) to female couples and single women. The revision of the Loi de Bioéthique is on its way, after a long and tortuous journey. On 15 October, the law had already received the “Yes” vote of the National Assembly, the lower house, with 359 votes in favour, 114 against and 72 abstentions.

On Tuesday, January 21, the bill arrived in the Senate, after having been previously debated by the committee. The Chamber of the Palais du Luxembourg has already expressed an important initial position, rejecting the amendments aimed at eliminating Article 1, the core of the law, by 162 votes against, 126 in favour and 37 abstentions. In the end, on Wednesday, January 22, with 160 votes in favour and 116 against, the Senate voted to approve the first article of the Loi de Bioéthique. On the other hand, the proposal voted by the National Assembly to extend reimbursement to all was rejected: reimbursement will be limited to those suffering from infertility problems. It also rejected the proposal to include the possibility of donation of both gametes. The discussion on the other articles of the law will continue in these days, until February 4th, when the text will be sent back to the National Assembly, where Macron’s party, La Republique en Marche, enjoys a large majority.

More than twenty associations, including Manif pour tous and Les Associations Familiales Catholiques, gathered around the Marchons Enfants collective, have been mobilizing for months to call for a moratorium on this law, which completely excludes the father figure from the child’s reference persons.

The extension of MAP adds to the ethical problem linked to assisted fertilization, that of removing the father from the children’s lives by law, thus bringing thousands of “planned orphans” into society.

According to the appeal addressed by Marchons Enfants to President Emmanuel Macron, “In concrete terms, according to the estimation of the Minister of Health, Agnès Buzyn, [the law] will create 2000 new fatherless children per year. And if you look at the example of some countries that have extended MAP, you will see that within a few years there will be up to 7,000 new orphans a year, which means that, in ten years, 70,000 children will be deliberately deprived of their father...”.

Marchons Enfants has also taken a stand on other aspects of the law: “As for demanding that the birth certificate of a child should include two mothers, this would be a state lie. Co-mothership does not exist.” Furthermore, “if MAP were also authorised for women who do not have sterility problems, medicine would become a service for the fulfilment of our individual wishes”. In reality, any assisted reproduction of the conjugal act is already a technical domain at the service of personal desire, which deprives the child of the natural human context worthy of conception. Moreover, the Senate’s special committee, charged with examining the 267 amendments tabled, has accepted the amendment proposed by Senator Muriel Jourda, from the ranks of the Les Républicains party, which introduced the infertility criterion. Cold comfort.

Apart from the amendments, it is clear that the stakes are even higher: “We are not stupid”, insisted the appeal signatories, “sooner or later, after fatherless MAP there will be post-mortem MAP, maternal surrogacy, etc.”.

The Permanent Council of the French Bishops’ Conference has also taken a position, expressing its “concern” about three aspects of the revision of the law. First, the French Bishops point out that it is not possible to subject the generation of a new person to a “parental project”, as the text would have it, because it would be a matter of giving to parents, or presumed parents, an absolute power, incapable of “guaranteeing sufficient consideration of the dignity of the child. Respect for the child should be the primary concern”.

The most disturbing aspect, however, is “the legalization of filiation without a father, or paternal ancestry, and of motherhood through a simple declaration of will, before a notary, without the woman living the gestation”. Thus we are faced with the “absurd”. But this fantasy will have brutally concrete consequences, and not only on children. In fact, the law does not even contemplate the possibility of resorting “to conscientious objection on the part of those, such as notaries, who refuse in conscience to take part, against their will, in creating the absurd”.

The French Bishops finally highlight the fact that the law contains the proposal to extend the “pre-implantation diagnosis”, thus opening the eugenic path to “a greater selection of the unborn”.

The Archbishop of Paris, Monsignor Michel Aupetit, who is among the signatories of the communiqué of the Permanent Council of the CEF, felt obliged to make his episcopal voice heard further in the run-up to the vote on the law in the Senate (see here), also with the intention of supporting Marchons Enfants’ demonstrations: “For years, we have been increasingly involved in a commercial drift of rich countries that allow themselves the luxury of organizing eugenic trafficking with the elimination of the most fragile”. Monsignor Aupetit wondered how it is possible that “our society, rightly so careful to respect the ecology of the planet, cares so little when it comes to humanity” and even endorses the “monstrous act of voluntarily inflicting on children the painful absence of the father”.

To stand before the Son of Man