Four months of war in Ukraine: the prophecy of Civitavecchia

Four months have passed since the Russian invasion of Ukraine; it was supposed to be a blitzkrieg, now it promises to last for years, according to the protagonists themselves. Russia has no intention of stopping until its goal is achieved; on the other side NATO is determined to do everything to defeat Putin. And more and more countries find themselves involved in some way. The prospect is increasingly worrying, and recalls Our Lady's prophecy in Civitavecchia about the risk of a nuclear world war between West and East. It can be avoided under these conditions... 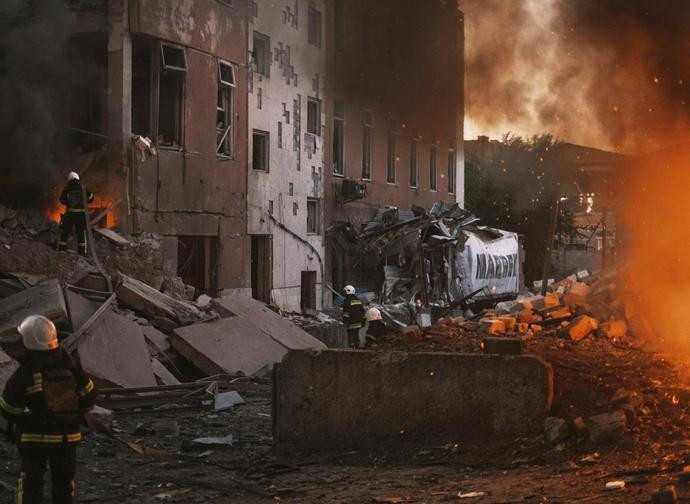 Exactly four months have passed since that 24 February when, at 5 a.m., the first Russian bombardment ignited the invasion of Ukraine. In intentions it was supposed to be a blitzkrieg, to secure control of the Donbass, take control of the corridor to unite it with Crimea, unilaterally annexed in 2014, and provoke a regime change in Kiev to bring Ukraine back into Moscow's orbit. Things, as is almost always the case, have turned out differently than expected: with the political objective now skipped, the military operation is also going slowly, although Russian troops, having created the desired corridor, are now bringing the Donbass under control. Ukrainian resistance, with the generous supply of weapons from Western countries, has made the Russian advance more complicated, but it has not brought it to a halt.

Thus time passes, the war becomes chronic - the protagonists on both sides openly speak of a war that will last for years - and spreads while, paradoxically, public attention wanes. With an attitude of distracted spectators, we have in fact seen in recent months - in addition to the destruction of the Ukrainian regions under attack and the thousands of deaths on both sides - the request for NATO membership by Sweden and Finland, the challenge launched against Russia by Lithuania with the blockade of the Russian enclave of Kaliningrad, the start of the rearmament of the former Warsaw Pact countries, Poland in the lead.

In the meantime, after an initial wait-and-see stance, China and India are increasingly openly supporting Russia, as was demonstrated yesterday at the annual meeting of the BRICS, the bloc of the five fastest developing countries: Brazil, Russia, India, China and South Africa. Chinese President Xi Jinping directly attacked the West, especially on the issue of economic sanctions which, used as a 'political weapon', cause negative consequences for everyone. On the other hand, as Russian President Vladimir Putin said, the axis with the BRICS is cancelling out the negative effects of Western sanctions: in the first three months of 2022, trade between Russia and the other four partners increased by 38%, reaching the figure of USD 45 billion. Moreover, the very situation created with the Western countries is accelerating the attempt to create an alternative international financial system among the BRICS.

On the other front, the serious consequences for Europe of the sanctions against Russia, especially with regard to gas supplies, so far are not decreasing the determination to support the Ukrainian resistance and to stop Putin at any cost. On the eve of the G7 summit (Sunday, 26 June) and the NATO summit (29 June) a tightening of sanctions and an increase in military supplies to the government in Kiev is taken for granted.

The interview given yesterday by the British Prime Minister Boris Johnson to the main European newspapers (in Italy it was published by the Corriere della Sera) offers a clear picture of the western objectives and strategy. No “bad peace agreement” with Putin. The goal is to make Putin's project fail, i.e. that “we must return at least to the status quo before 24 February. (...) It means that his forces are expelled from the areas of Ukraine they have invaded so far”. If this is the goal, “we have to help the Ukrainians gain strategic resilience: they have to keep going”; which also means that “this is not the time to maintain the status quo, this is the time to try to turn things around. As long as the Ukrainians are capable of mounting a counter-offensive, they should be supported, with the equipment they are asking us for”. And it will be Ukrainian President Zelensky who will reiterate this demand by attending both the G7 and the NATO summit.

Johnson's perspective is clearly a long-term one and he takes into account “energy costs, inflationary pressures, food prices”, all factors that are already swaying European countries. But above all he implies an increasingly direct military involvement. If in spite of the fact that over 40 billion dollars in financial and military aid (more than half from the United States) have been sent to Ukraine in recent months - and military assistance from NATO countries had already been in place long before - it has not been possible to bridge the military gap with Russia, what will it take to stop Russian troops and then organise a counter-offensive to take back the territories lost in these four months? It is obvious that Johnson is talking about a military escalation that cannot be limited to the mere supply of armaments and technical assistance.

Thus, the scenario that lies ahead is that of a war in escalation and at an international level, a prospect made worse by the fact that there is no actor in the field with a real peace initiative in mind. Neither can the Holy See's diplomatic action change the course of things, not only because of its wavering direction over recent months, but because at the moment there are no players really interested in a mediation that has only moral force.

In the face of such a dangerous situation and with public opinion bemused, the messages that Our Lady in Civitavecchia entrusted to the Gregori family back in 1995 cannot fail to come to mind. In Riccardo Caniato's interview from the book 'Civitavecchia, 25 Years with Mary', by Father Flavio Ubodi (Ares 2020), Fabio Gregori explains how Our Lady - directly referencing the Fatima apparitions - “warned us that Satan is powerful and wants to unleash hatred, followed by war to destroy humanity”. And what war are we talking about? "The threat of a nuclear conflict between the West and the East, the Third World War". Moreover, it is a war that goes hand in hand with the war on the "Christian family founded on marriage" and with "a new great apostasy, that is, the denial [by pastors] of the fundamental Christian truths reaffirmed over the centuries in tradition and doctrine". As we see, great apostasy and war on marriage are already well advanced; conversion - with prayer and penance - is the real key to prevent the rest from happening.