"For Iran compulsory hijab is like the Berlin Wall"

Masih Alinejad, journalist and blogger, is one of the most representative figures of the Iranian women’s revolt against the Ayatollahs’ Islamic regime,  exploiting social media, from her exile in America, to fuel the protests. But she also has a warning for the free world: "Either democratic countries unite to end Islamic terror, or Islamic terrorists will end democracy." 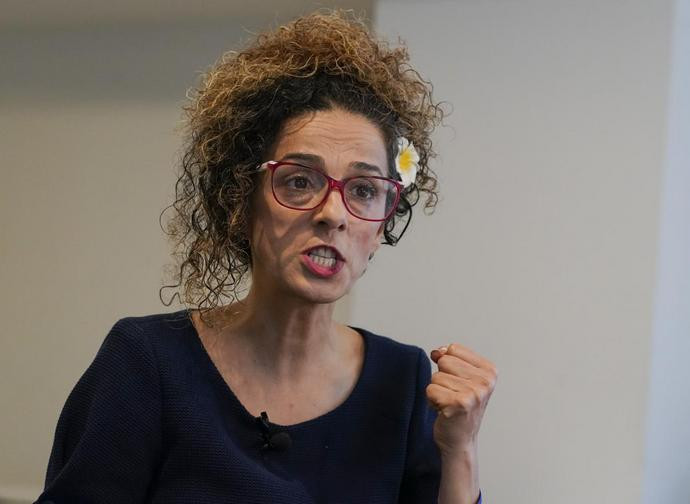 “For the Islamic Republic of Iran compulsory hijab is like the Berlin Wall, if it’s torn down the Islamic Republic won’t exist anymore. That’s why these protests scare them and they are shooting innocent people.” Masih Alinejad, a 46-year-old Iranian journalist, is one of the most powerful voices of the moment and a bellyache to the grey-bearded ayatollahs that rule the Islamic State of Iran. She has captured the world’s imagination and her growing influence in Iran is chipping away at their power.

Masih was 2 years old in 1979, when the Shah of Iran was deposed and Ayatollah Khomeini returned from exile to lead Iran as an Islamic Republic. From that moment on, she says, everything was different, people became miserable. As she grew up her rebellious nature began to emerge: she joined an underground protest movement when she was still in school and at 18 years-old was arrested and imprisoned. “That period in solitary confinement was the scariest moment of her life”, but she admits, it also honed her determination to fight for women’s rights in Iran.

She received a suspended sentence and retrained as a journalist. But, the calm before the next storm didn’t last long. She was suspended from her job as a parliamentary reporter for wearing red shoes and then sacked for criticising members of the government. In 2009, fearful for her life, she fled the country. She moved first to the U.K. for a period of study and then in 2014,  Masih moved to New York City where she lives protected by the F.B.I. changing her address frequently after two attempts on her life. She spends most of her time rallying support for the on-going protests in Iran.

In fact, the protests are in their second month now and Iran’s theocratic dictatorship is visibly losing its grip by the day. For them, “it’s not about a piece of cloth,” Masih explains from exile in America, “compulsory hijab is the main pillar of this gender apartheid regime.” “The authorities are watching me and my campaign against compulsory hijab because they know how powerful it is that ordinary women are protesting.” “One day, the Iranian regime will be brought down by women”.

The Iranian government has been watching Masih for some time now, even long before the protests irrupted. Her public appearances draw huge crowds, her YouTube videos denouncing the Islamic State of Iran are viewed and reviewed by tens of thousands and she has amassed 10 million followers on Facebook, Instagram and twitter. What’s more, most of Masih’s followers live in Iran and despite the government blocking social media sites, many Iranians continue to follow her by using private virtual networks to post videos and photos of what’s happening in Iran on her profiles enabling millions to witness the bravery of their fellow-citizens and to see how widely their views are shared. Even the government’s attempts to undermine her, by routinely accusing her of being a traitor and a stooge of foreign powers on state-television programmes, has had limited impact.

Since protests were sparked by the September 16 death of 22-year-old Mahsa Amini in detention presumed at the hands of the country's morality police, at least six thousand are believed to have been arrested. The average age of those currently detained in prison in Iran is 15-years-old. So far, human rights groups estimate that over 224 people have been killed during the crack down. While, according to the Committee to Protect Journalists, the authorities have detained at least 40 journalists in an effort to control news reports.

Without doubt, the demonstrations, drawing school-age children, oil workers and others to the street in over 100 cities, represent the most-serious challenge to Iran's theocracy since the mass protests surrounding its disputed 2009 presidential election. It’s also clear that not only anger at Amini´s death is fuelling the ongoing demonstrations, but deep dissatisfaction with life under the regime. Iranians have lost hope for the future under the Islamic State. They have seen their life savings evaporate; the country's currency, the rial, has plummeted and Tehran's nuclear deal with world powers has been reduced to tatters. Above all, Iranians have lost their freedom.

Still, there’s something new in the air in Iran. The promise of change is sweeping through the country like a breeze. The scenes of Iranian women triumphantly waving their scarves above their heads, or dancing and bravely burning their hijabs on bonfires in public, is far more impressive than the images of Iran’s security forces violently beating defenceless women for letting their hair down. “That’s the joy of being free from the slavery of repression”, says Masih. “The authorities can take everything away, family, home, friends and country, but they can’t take our hope from us”.

Change was Masih’s goal when she started her first campaign in 2014, to pressure the Iranian regime from the outside using social media. It began with a snapshot of Masih taken in London, running joyfully down the street, her signature cork screw curls flying in the wind. She posted the photo on her Facebook page with a message about how in her own country, this simple act would be illegal and could lead to arrest. It immediately spurred others to join her. Within days, a campaign was born called “My Stealthy Freedom”, inviting women to share photos of themselves without their hijabs and to send her the evidence to publish on her Facebook page. “Our cameras are our weapons”, states Masih in a rallying cry. “Women appear powerless because the government has the power, guns, money and prisons” but women can defeat them by sharing “the proof of their peaceful defiance”. The campaign took off launching an even bigger campaign for freedom on the streets of Iran and appeals to the international community.

But, Masih is also disgruntled with the Free World which she claims is dragging it’s feet instead of taking strong action against the Islamic regime. She has spoken out against the sanctions imposed on Iran in 2009 that left the poorer poorer while the Supreme Leader Ayatollah Ali Khamenei increased the budget so the morality police could tighten its control Iranian on women. She says, “Iranians already live under government sanctions which deprive us of decent health care, freedom and prosperity”. She has also begged democratic leaders not to focus on a nuclear deal without demanding Tehran deliver on human rights for women in Iran.
But above all, she has decried the silence of western feminists who declare “my body my choice” but do nothing to support women who have no choice, whose bodies are used as a political battleground. “Why don’t they come to the streets and give a voice to these innocent people and show their sisterhood”, says Masih. “Islamic State means from the age of seven, girls in Iran have to cover their hair and wear loose clothing. No hijab means no education, no going out, no job, being legitimately beaten, imprisoned, raped and killed”.

Masih warns the Free World it stands at a crossroads, “either the democratic countries unite to end Islamic terror, or the Islamic terrorists will unite and they will end democracy”.